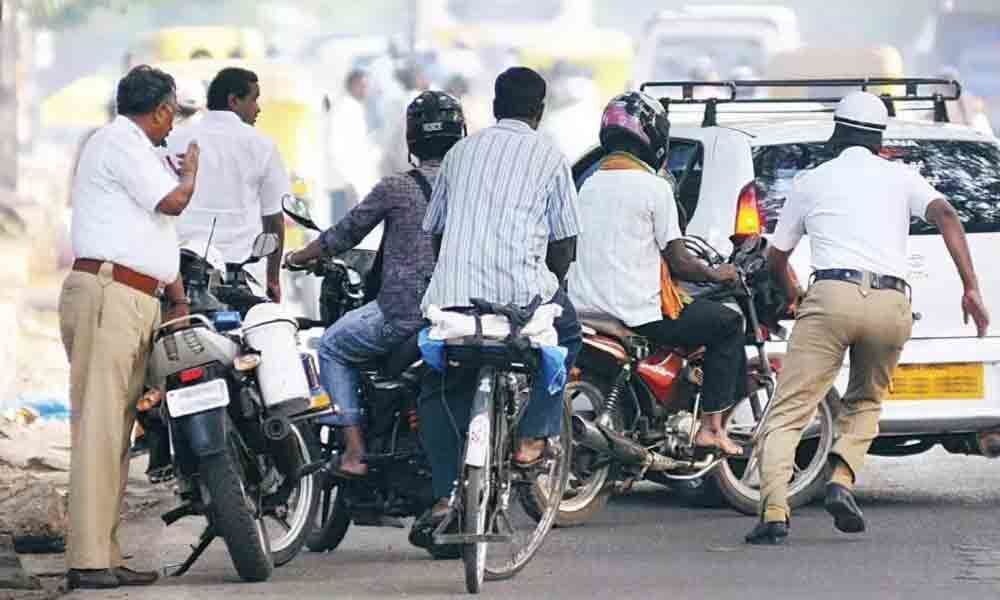 I'm thrilled with the new traffic rules,' said Subbu. 'Now we can show how patriotic we are.'

'No, no,' said Subbu. 'By paying fines. Till now our contribution to our nation was low thanks to measly fines for traffic violations. Now with everyone contributing through these hefty traffic fines, we will surely be the next economic superpower of the world.'

'Subbu, these fines are meant to improve our traffic discipline,' I said. 'You are interpreting it wrongly; that anyone who pays more fines is more patriotic. That's incorrect.'

'If the nation needs it, I will break rules also,' said Subbu dangerously. 'Today the nation needs us to pay fines through traffic challans. I will be more than happy to pay. I don't even mind going to jail also for drunken driving.'

'But you can't break the law.'

'Who will pay fines then? How will our economy prosper? Is that what you want? It is because of people like you that the nation's economy suffers. I see something anti-national in you.'

'Arre, how can I be anti-national if I am following rules?' I asked, worried about the turn this was taking. 'Just saying we should follow the law.'

'Who said I am breaking the law?' said Subbu. 'I am doing what is good for my country. And I will pay the fines proudly.'

'Let's say I'm fined for jumping the signal,' explained Subbu. 'Most people will complain that the signal is not working or that the signal cannot be seen because the police have hidden it etc. You may be right, but will it help the nation? No. A true patriot will pay happily even if there is no signal.''

'My average speed in the city traffic is about 9 kmph,' said Subbu. 'Now if I am fined for driving at 10 kmph, I'll happily pay for over speeding. I don't know what the speed limit is, and I don't think anyone knows either, but I love my country, so I'll pay.'

'Similarly, we all know we must share resources because our public transport system is not great. Instead of blaming our government can we go triple riding and also pay fines? Two birds with one stone!'

'Look, you're getting it all wrong,' I squeaked. 'That's not the way.'

'If I cannot speak on my cell phone while driving, I will have to be parked by the roadside all day. If I go nowhere, is that good for the economy? No. And if I am saving fuel by going on the wrong side is that a bad thing for the country? No, I'm saving fuel, right?'

'Is there no rule you won't break?' I asked in alarm.

'There is one rule,' said Subbu thinking deeply. 'The rule about Dangerous Driving! I cannot break this rule because I am already driving the wrong side, over speeding, triple riding, cell phone driving etc. After much thought, I realised what this dangerous driving rule is about?'

'What?' I asked eagerly.

'It is the kind of driving that our traffic is not used to,' he said. 'Most dangerous drivers.'

'People like you,' he said. 'You follow all the rules and cause accidents to the others who are not used to such driving. And, you do not pay any fines on top of that. You're useless. They should put you fellows in jail or cancel your driving licenses.'

I got up and quickly headed to the horizon. Well over the speed limit. To be doubly safe!