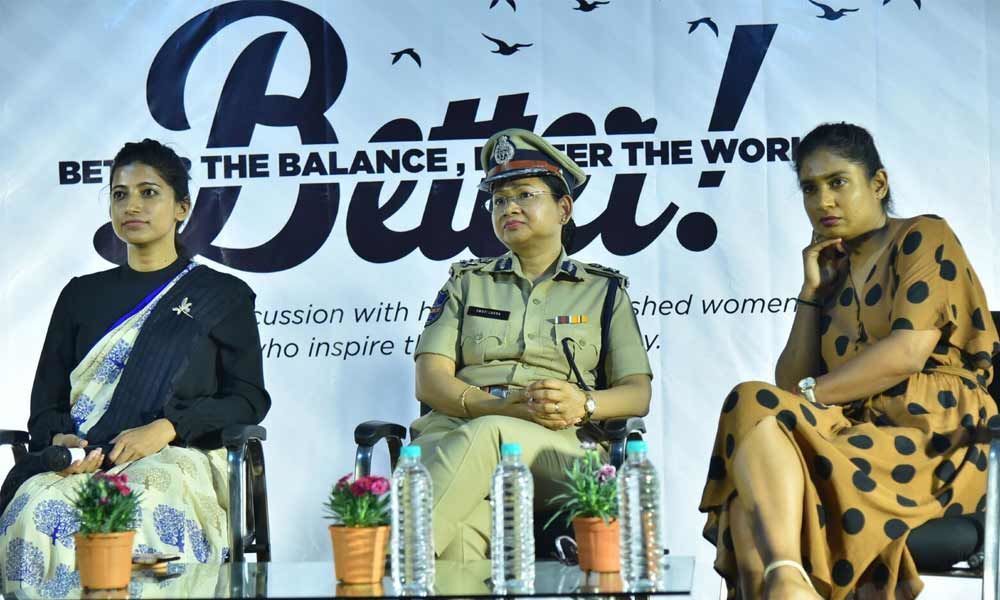 The panellists at the Better the Balance/Better the World event conducted by Hyderabad-based NGO, Youngistaan Foundation stressed upon the need “to question gender discrimination in everyday life from a young age” to establish gender equality

The panellists who graced the occasion were - Amrapali Kata, Joint Chief Election Officer, Telangana, Swathi Lakra, IGP (Law and Order) and in charge Women Safety Wing, and Mithali Raj, Indian Women's Cricket Team. The event was started by Shruthika Chowdary with a poem revolving around women being strong and expressing their valor which left the audience with goosebumps.

Amrapali Kata, said, "I do not see this world as a man's world which makes it easier for me to aim. Undoubtedly it is tougher for women to perform, achieve and continue achieving for a longer period of time.

Personally, I have been fortunate as my parents are major feminists and that helped me and my sister to become strong women. It is a constant battle for me, most of the women and men to challenge the gender roles that have been imbibed in people since childhood.

One has to constantly fight against their own self to understand their boundaries and they need to push it more in the real world. Fighting, achieving and being an individual who defines their own course of life will become a bigger challenge."

Swati Lakhra spoke about her challenges which she faced to move 5 per cent women reservation to 33 per cent in police department. She said, "When 50 per cent of the population are women, it is really important to have equal number of women police in law enforcement area also.

A woman should not scout for a women police station as such to give a complaint, she has to go to the concerned jurisdiction and file a complaint. We are working forward towards it."

Mithali Raj, said, "It was not that easy to take up sports. As a girl as I had my own struggles as my grandparents were not keen about me getting into sports, but my parents had cocooned me from all the negativity that I have faced at home. Nevertheless, I felt negativity from the society too. When we travel with our cricket kit, people referred it as a Hockey kit.

When we told them about, we are Indian players who were going for tournaments or to play a series, they would question if we have the same rules in cricket or do, we play with a tennis ball as it is softer and not the cricket ball as we girls get injuries.

As a child, I was very judgmental about such situations but when I grew up, I realised we can't blame the society as it was not promoted much, and we do not see women playing cricket in the street as other men do.

However, today, we see a lot of people taking up sports as a profession and eventually, things have changed for women in sports."

In regards to understanding where the change should begin, all of the participants believe that gender neutrality takes a course of change only when people of different age groups, professions, and mindsets begin to widen their thought process to changing world and treat equally both genders.

Speaking about the event, Arun Daniel Yellamaty, founder, 'Youngistaan Foundation', said, "The primary aim of the program is to give a broadened perspective from eminent personalities and encourage more people to pursue such professions and have equal opportunities for women and encourage young women so that there are balance of opportunities for both men and women."