A rainbow coalition may not deliver 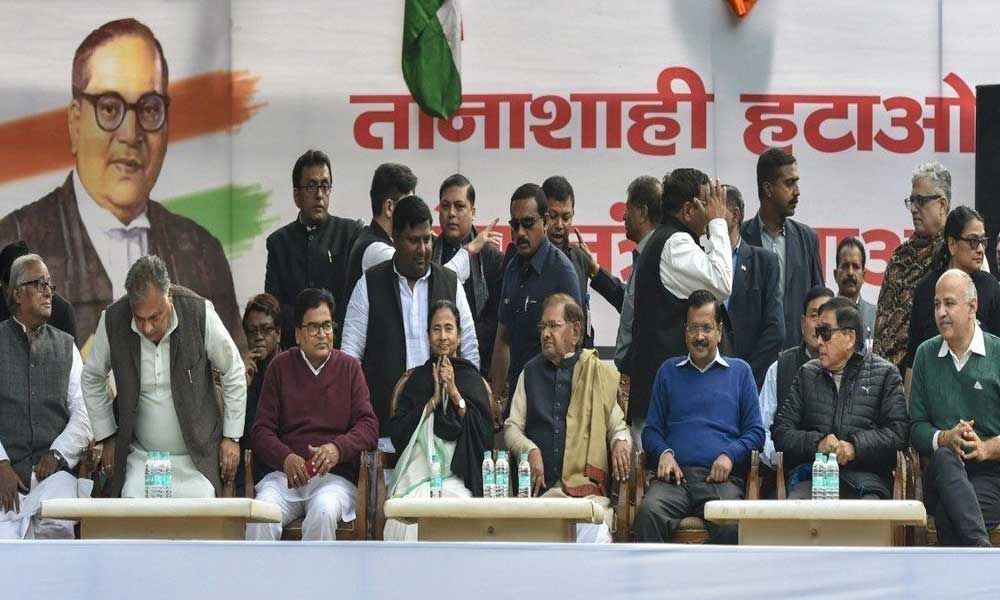 A rainbow coalition may not deliver
Highlights

As the nation draws closer to the date on which its people will once again participate in the historical process of electing those who will govern it,...

As the nation draws closer to the date on which its people will once again participate in the historical process of electing those who will govern it, many a likely scenario is unfolding in the minds of experts and observers, not to mention psephologists.

Governments of the past have comprised many hues of political persuasion, ranging all the way across the ideological spectrum from the extreme right to the extreme left. Similarly, there have been regimes which enjoyed total majority in Parliament and some with just enough numbers to form a government, not to mention those which were actually in a minority but managed to hang on with the support of one party or other.

On the whole, however, it has always been a national party which has controlled the dispensation at the Centre but for two exceptions: the four – month stint of Charan Singh's Janata Party (S) in 1979-80 and the seven - month long Chandrashekar (JD) led government - supported from outside by the Congress (I) - in 1990-91.

In other words, the nation has never before witnessed the phenomenon of regional parties alone forming the government at the Centre. Any coalition should not be a mere sum total of the individual constituents. As an entity it should add up to much more than the aggregate of the individual units. In essence there should be not mere physics, but more importantly, chemistry and amongst the parties coming together so that the end product is not merely more than, but different from, the original partners.

As, for instance, Hydrogen and Oxygen combine to give water, even though the number of molecules of the former is twice as many as that of the latter. And that additional extra value or quality should really represent what is lacking in the typical regional party – namely an agenda for the nation as a whole rather than merely for the regions the parties represent. The regional parties, in other words, need to acquire a truly national character, an attribute that is recognised and accepted, not only by the other parties in the political arena, but the people of the country too.

It should not be forgotten, after all, that no leader of a regional party has had earlier experience of leading a national dispensation and, therefore, is naturally and understandably unfamiliar with the political and administrative implications of complex fields of such as finance, defence and external affairs etc. It is also likely that leaders of such parties have not, in their experience to date, had much interaction with international personalities/institutions and will, to that extent, find themselves at a disadvantage, at least to begin with.

The issue of compatibility between and amongst the partners of the coalition can also pose challenges. As one saw in the NDA government, partners of the coalition had ideologies not merely at variance with one another but, sometimes, quite contradictory. The day to day tensions arising from the tendency of such partners to pull in different, if not opposite, directions, can substantially impact adversely the smoothness and efficiency of the functioning of the government.

Many regional parties such as the TRS party in Telangana and the party in Tamil Nadu – represent only one state. Therefore, given that states often compete with each other in various socio-economic spheres, the impartiality and evenness of the central government in the matter of inter se allocation of resources and programmes between different states is also likely to be adversely affected.

We need to note, in this context, that parties such as the CPI and the CPM, which are technically national parties, have become as good as regional parties, as their presence is currently confined only to two or three states.

In the ultimate analysis it must be conceded that no party, or combination of parties, will answer the question that is begging the situation today – namely, how does one deliver good governance? Clearly something that cannot be contemplated until political parties, and their leaders, rise above the temptation to yield to the opportunities to acquire wealth through power.

The frequent defections one has seen from one party to another, as witness, for instance, what happened in Telangana state recently, do not unfortunately dispel the impression that such, after all, continues to be the case. The fact that political leaders, who were in a rival camp until only a few weeks ago, shift loyalties and suddenly begin to appreciate the ideology of another party under the cover of ideological frustration with their original party is as strange as it is deeply disturbing.

Another feature our polity appears to be lacking is the ability for parties to bury the hatchet and come together in moments of crises, regardless of political differences. In this context, the example of Israeli Parliament, where airstrikes in 1981 on Iraqi Osirak Nuclear reactor were greeted with unanimous applause from all sections across the spectrum of political ideologies, comes to mind on the international scene.

Incidentally, the hero of those airstrikes, Rafi Eitan died last week at the age of 92. And, within the country, we have the well-known ability of the opposition and the ruling parties in Tamil Nadu to join hands while dealing with issues of importance to the state. Both the incidents are examples of how political differences should be forgotten and an atmosphere of trust prevail when the interests of the general public are involved.

What better testimony to this sentiment than the statement of George Bush (senior) who, after having lost the election, said "Clinton or Bush is immaterial. Let all us rally behind Clinton. America should win". Those familiar with cricket, famously called the 'gentleman's game' will no doubt see the parallel between this, and the oft quoted statement that, in the final analysis, it is the game of cricket that should win, no matter who emerges victorious in a given game.

Another factor that discourages one from being sanguine about successful coalition arrangements between regional parties is their reluctance to form pre-poll alliances. This attitude leaves the elected people free to shift loyalties with impunity, the prohibition in the electoral laws notwithstanding.

In this context, one cannot help recollecting with sadness the fact that even a leader such as P.V. Narasimha Rao had to wink at questionable practices, in order to secure the stability of the government. One can hardly expect the voter to feel enthusiastic about the prospects of a regional party coalition coming to power at the Centre.

When all is said and done it can hardly be gainsaid that, in essence, the idea of a regional party coalition ruling the country is unwelcome. It should not be forgotten, however, as past experience has taught us, that rushing into such an arrangement in the absence of firm agreements preceding the formation of governments , especially in terms of sharing of positions and powers, would be highly necessary. And needless to say, ensuring, either through agreement or by statute, that no 'horse trading' takes place would also be absolutely necessary.

Finally, a great deal of unswerving loyalty to one's principles and persuasions, as also the need to superimpose the qualities of statesmanship over effective political approaches, will be needed before the citizens of the country can be expected to accept the viability of this exciting and challenging prospect.