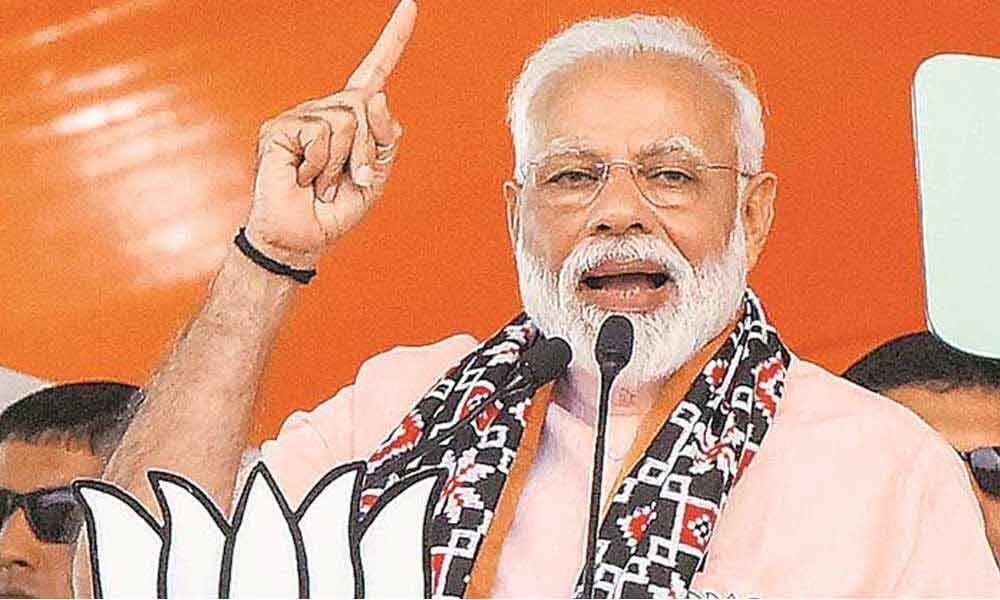 Riding the wave of a resurgent Hindu identity, Narendra Modi has hoisted the BJP to a historic win in the 2019 general elections.

Riding the wave of a resurgent Hindu identity, Narendra Modi has hoisted the BJP to a historic win in the 2019 general elections.

One might call the election results as a 'big win', 'a sweep' or a 'resounding thumping majority' and many more things.

But, one thing it certainly is: a Hindu consolidation in every sense.

If the BJP could paint the country saffron except perhaps, in Kerala and Tamil Nadu, credit should as much go to the 'disunited Opposition' as well to the systematic planning of the party, the Sangh Parivar and BJP president, Amit Shah, who relentlessly worked on the subaltern groups and fringe forces unmindful of the unity efforts of the Opposition and with the allies.

Yes, Modi has to be factored in, in a big way, in the BJP's stellar performance. But he was ably assisted by his own leaders and the RSS but also abetted by the fragmented Opposition in a big way.

One always says Modi led his frontal attack shaping it around the nationalistic spirit. Yet, it was only an opportunity that he sought to exploit and did succeed fully in implementing his strategy in making it a 'Modi vs Nobody" contest.

In every sense it was a 'Modi vs Nobody' affair because there was not a single face in the entire gamut of the Opposition that could match his vigour and voice.

He preferred not to shout at them as the Opposition voices got shriller and shriller and began calling him all sorts of names.

It was a 'Modi vs Nobody' contest, because there was no unity among the Opposition and it did not provide any alternative to the masses.

It never spoke of the people's issues like joblessness, farmers' strife or growing divisiveness among the society and Modi conveniently switched over to Pulwama, Balakot and surgical strikes thus switching over the discourse to his strength and the Opposition's weakness.

It was a 'Modi vs Nobody" fight, because, the Opposition literally fought while the BJP contested intelligently. Just remember that Naveen Patnaik, unlike his counterparts, did not make it a 'life-or-death combat', but simply went ahead coolly offering the voters a debate on the developmental works and programmes he had undertaken to counter the BJP campaign.

The rest of them did not look within even in case of some good work done and explain the same to the people, but preferred to target Modi on everything and for everything.

Congress party, led by a leader full of inadequacies, could not rise to the occasion in sustaining its narrative around the secular ethos of the country at least.

Perhaps, Rahul Gandhi's advisers were not mature enough to grasp the situation. Some of the talk and criticism got so much publicity in our neighbouring country that it almost sounded like a voice of unison like flutes playing in unison with violas in a concert. Sharp intellect of Modi did not miss the opportunity.

Again Modi-Shah duo could gauge the public mood and anger in West Bengal against the TMC leadership which was acting listlessly at the behest of Mamata Banerjee.

Mamata should ponder over a longer time like her counterparts elsewhere do as to what has hit them and why.

Is it just the change in the society - people turning towards religion more - as it is happening throughout the world, or is it a result of the foolish attempts at stymying the Opposition that has led to the distinction of the BJP in West Bengal?

Well, the full story will be told in 2021 when the state goes on to elect a new government. As of now, who did the CPM cadres vote for?

Rajasthan and Madhya Pradesh were never a challenge to the BJP even though it had lost both in the last Assembly elections.

The voters in the two States along with Chhattisgarh, were as determined to vote for Modi when it came to Parliament then. "As for now, a change in the government locally is important" was the averring of the voters before the Assembly elections.

No one ever believed that Modi had put Rs 30,000 crore in the pocket of Anil Ambani through Rafael. It was strange that Rahul and his cronies ignored the fact.

People would not have been interested in it as long as Modi was seen to be teaching a lesson to Pakistan at every fora including on the troubled borders.

Pulwama, Balakot and Masood Azhar did not help the Congress and it should have been careful about its 'Chowkidar Chor Hain' slogan.

That was the ultimate insult to Modi, an 'elderly man working for the country's image worldwide and protecting our borders from Pakistan' and no youngster should have attempted it, was always the refrain from the voters though it failed to establish Modi as a 'Chor', at least it helped in sustaining his image as a 'Chowkidar'.

UP was a different story altogether. This is where, Amit Shah carefully has been working with non-Yadav and non-Jatav votes, however small the groups may be.

The first-time voter became an asset to the BJP and 'Swachh Bharat" had its impact in States like UP and Bihar where women in large numbers were the real beneficiaries.

Added to this was the money transfer to the Kisan. It really helped the party score over others despite the non-implementation of transfer of Rs 15 lakh into each poor man's account.

If one were to sum it, one should say this: The Opposition tried to paint Modi as the villain of the piece asking the voters to chose him or some unknown or lesser known entity in his place.

The voter has chosen a 56-inch macho as its leader unmindful of any other consequences. Pakistan has been taught a lesson. Other things can wait.