Can Yedi lead Karnataka to progress? 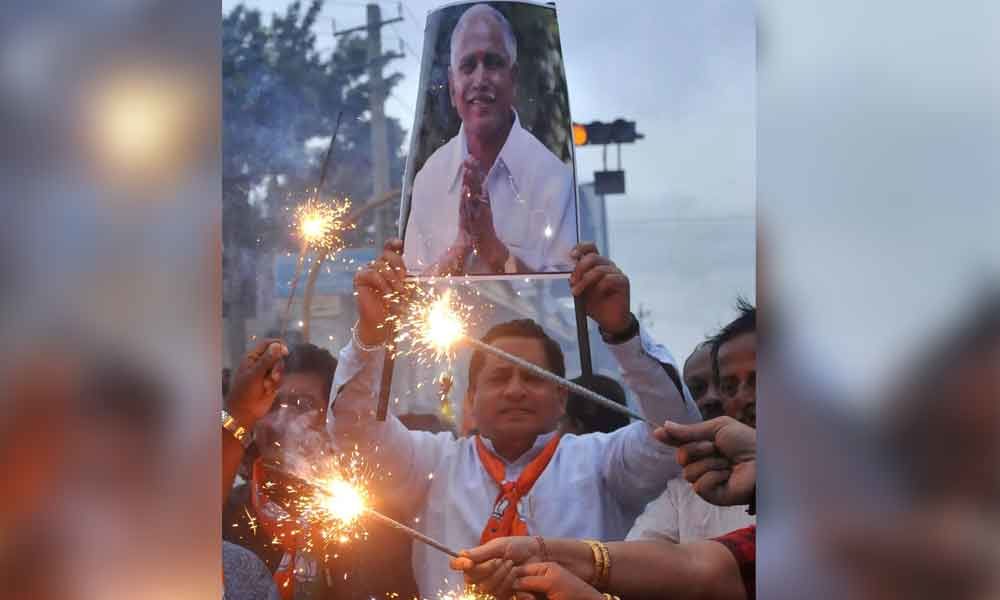 BJP leader B S Yediyurappa took oath for the fourth time as the Chief Minister of Karnataka.

BJP leader B S Yediyurappa took oath for the fourth time as the Chief Minister of Karnataka. Incidentally, he took oath on a day when the country is celebrating Kargil Vijay Diwas to commemorate the martyrdom of soldiers who fought for the victory during the Kargil War.

Even today many houses in the border village of Kargil speak volumes of the intensity of the attack from the enemy camp. This writer himself had the opportunity to have the first-hand account of the war when he visited Kargil in 1999, during the war to show solidarity with our brave soldiers.

Prime Minister Narendra Modi tweeted, "This was the time when I was working for my party in J&K as well as Himachal Pradesh. The visit to Kargil and interactions with soldiers are unforgettable." Interestingly, Friday also happens to be the day when Modi 2.0 government has completed 50 days in office.

Before we take a look at what the Modi 2.0 government has done in the past 50 days, the big question is that will the BJP be able to usher in a new era of development in Karnataka from now onwards? This was the claim made by Yediyurappa soon after the Congress-JDs government collapsed.

Will the new Chief Minister strictly follow the agenda that has been set by the national party soon after coming to power for the second time? Will he be able to restore the brand image of Karnataka which took a blow following the instability in the State government?

Will he be able to address the farmers' issues? And above all, can he ensure that the government will survive for the remaining period of four years? These questions arise because of the past record of Yediyurappa .

He will also have to make sure that the farmers are empowered, employment opportunities are created, and social security measures are taken and see that the State gets investments.

The Prime Minister has set an agenda wherein it has listed issues like empowering farmers, poor people, labourers and youth by employment generation, see that the middleclass people get better living conditions, create an atmosphere where the traders can lay greater emphasis on investments and move in the direction of the major task of making India $5 trillion economy.

The road map which the Central government is following, according to Minister for Environment and Information and Broadcasting Prakash Javadekar, is to cover all the 14-crore farmers in the PM Kisan Samman Nidhi Yojana, in which every farmer will get Rs 6,000 per annum as an aid for inputs.

The State governments are free to add any amount to this to help the farmers depending upon their resources. The Andhra Pradesh government announced that it would pay Rs 12,500 per farmer which includes the Central component. It now remains to be seen how Yediyurappa would implement this scheme to win over the farming community.

The main demand of farmers used to be, and remained for 40 years, that they must get remunerative prices for their produce. Remunerative prices are defined by M S Swaminathan Committee as cost of production plus 50 per cent. The Modi government has ensured this in the last two years and 24 crops are now being given MSP which is 50 per cent more than the cost.

Now, the percentage return to farmers over their cost of production is 85 per cent for Bajra, 64 per cent for Urad and 60 per cent for Tur. To ensure economies of scale for farmers, 10,000 new Farmer Producer Organisations will be setup in the next five years.

Besides, there is also a renewed emphasis on the fisheries sector. All these measures will help farmers to double their income by 2022.

Another major thrust area of this government for the next five years will be "Jal Shakti" with assured potable water supply to every home. This is a humongous challenge and requires massive investment.

A separate Jal Shakti Ministry has been set up to implement the vision of the government. Interstate Water Dispute Resolution Mechanism has also been revisited. A new authority is to be formed and Prime Minister Narendra Modi wants "Jal Shakti" to become a social and people's movement.

Water is also a major problem in Karnataka. Tamil Nadu and Karnataka have always been at loggerheads in regard to utilisation of Kaveri waters. So, it remains to be seen how the State would implement the Jal Shakti programme of Modi.

For 40 crore unorganised sector workers, four codes are to be created by subsuming many labour related Acts. The thrust of this reform is to provide wage and social security. It will ensure issue of appointment letters and timely payment of wages to every worker in the unorganised sector.

The employees' and employers' contribution for Employees State Insurance (ESI) Scheme has been reduced to give relief. For the first time, the Modi government has approved a new scheme that offers pension to small shopkeepers and traders.

For the middleclass, the Interim Budget had provided big tax relief as no tax is payable by any individual taxpayer having income up to Rs 5 Lakh. Goods and Services Tax (GST) on home construction has also been reduced and there are many concessions announced in the Budget on loan repayment and interest subvention for home buyers.

For students, National Medical Commission Bill is a landmark decision which provides for one common entrance 'NEET' exam and one exit exam and also ensures fee regulation even in the private colleges.

For making India a $5-trillion economy, you need investments. The government has taken many such decisions in the first 50 days to enhance the flow of foreign and domestic investments; has revamped Insolvency and Bankruptcy Code (IBC); recapitalised public sector banks with Rs 70,000 crore; and undertaken disinvestment and closure of some sick units.

India's standing in the world has gone up considerably during the Modi regime. On the occasion of his second swearing in ceremony, all BIMSTEC leaders were present.

Modi played a lead role in G20 narrative. His visits to Maldives and Sri Lanka have reinforced India's strong ties with them. The success of Chandrayaan-2 and plan of Gaganyan in 2022 have made India the fourth country in the world to have this space capability.

Forty thousand local representatives were elected in panchayat elections for the first time. In the crusade against corruption, 27 senior officers were summarily removed of the services because of corruption charges and a strong action has been initiated against their benami property as well.

Concerted efforts are being made to bring back fugitives; jail has been ensured for some fugitives in the foreign countries; and deportation of many other fugitives is on cards.

How best and fast can the Karnataka Chief Minister make use of Modi's roadmap and take the State forward is something that remains to be seen.

The BJP had virtually set aside its policy of keeping those above 76 out of active administrative setup and allowed Yediyurappa to become the Chief Minister. He now has two major challenges before him. One to implement Modi's policies and two to keep the flock together as he got majority from turncoats.