Children have the right to eat eggs, onions and garlic 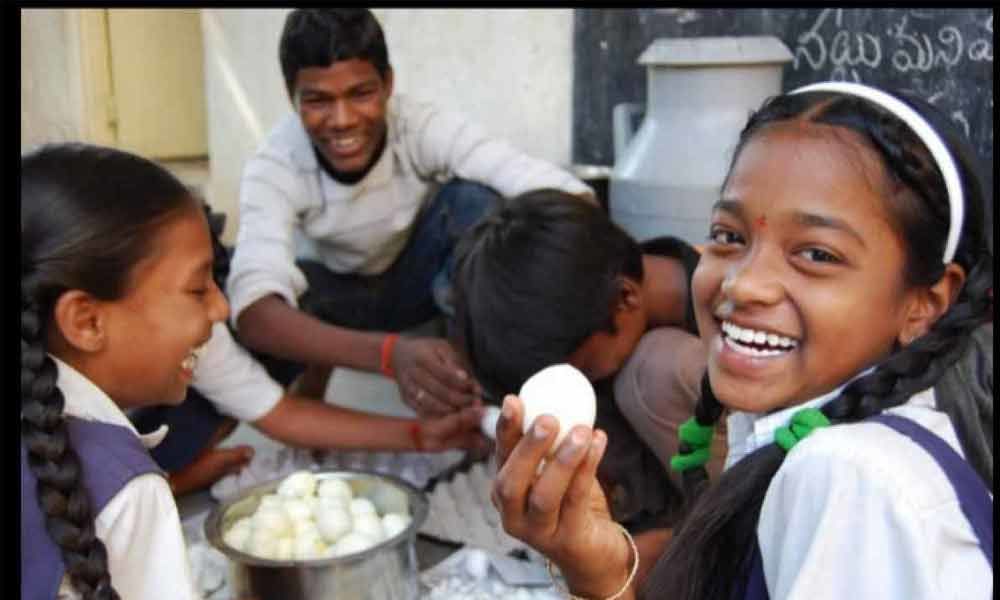 The midday meal scheme for schoolchildren is increasingly getting politicised, as the upper class elite wants to impose its own religious/food beliefs on malnourished children

Most countries in the world now have some programme that provides midday meals to schoolchildren. School meals have been widely hailed for their multiple benefits — they increase enrolment and attendance, particularly of children from vulnerable groups; contribute to reduce "classroom hunger" and improve learning outcomes.

While the midday meal scheme in India started in states like Tamil Nadu much earlier, the provision of cooked food in government schools was universalised following a Supreme Court order in the 2001 Right to Food case.

At present, all Indian states provide hot cooked meals to children up to Class 8, for which the Union government provides food grains through the Food Corporation of India and the cost for other ingredients and cooking is shared by the state and Union governments.

Based on a number of independent evaluations as well as government reports, by far it is agreed that the midday meal scheme is one of the best implemented programmes of the government.

While a number of serious concerns related to the quality of the meals remain, more so in some poorer states, school meals are served on a regular basis.

With most children in government schools coming from poor and marginalised backgrounds, the value of the scheme is much appreciated by communities and parents. The challenge is to improve the quality and locate the midday meal scheme in the larger food system.

One of the ways to improve the meal is by introducing items such as eggs and milk. Given the extent of malnutrition among children in the country, introducing animal proteins in their diets seems important in improving the nutritional content of meals.

Eggs are recommended because they are packed with nutrients and are logistically easy to handle and generally popular with children.

Milk, on the other hand, is difficult to reach everywhere, and the concerns of contamination and dilution are higher.

While a number of states have now included eggs in the menus of school meals, it has also become a highly politicised issue in some states — Madhya Pradesh, Rajasthan and Gujarat — with some protesting the provision of eggs in schools on the pretext that they were not acceptable to some children.

These groups argue that including eggs would make vegetarians uncomfortable and alternative sources of protein should be explored.

Many food rights groups have been arguing that this is not a valid concern since a majority of the children are indeed non-vegetarians, especially those belonging to Dalit and adivasi communities, where malnutrition is the highest.

Further, it is not the case that if eggs are served in schools there is a compulsion on all children to eat them. It is voluntary and substitutes such as fruits could be given to those children who do not wish to consume eggs.

The trouble is that even children's food and nutrition can get caught up in the (usually upper caste and elite) politics where even simple personal freedoms like what one can eat gets challenged.

More recently, this kind of politics has assumed a more absurd level. For instance, Akshaya Patra, a Bengaluru-based non-profit, has stated it will not include onions and garlic in meals they serve to children.

Being a religious organisation, Akshaya Patra wants to serve only satvik food. Akshaya Patra had similarly refused to give eggs a few years ago in Karnataka arguing that they first offered the food they cooked to god before distributing it in schools.

There are a number of problems with this kind of interference in what children can eat. First, the midday meal scheme is funded by the government, and religious concerns of this nature cannot be allowed to take over a publicly-funded and implemented scheme.

It must be recognised that India is not predominantly a vegetarian country nor can government programmes be taken over by the concerns of a small minority, which also happens to belong to the most influential and dominant communities.

Second, food served in the midday meal scheme must keep in mind local tastes and preferences. In many parts of the country, children are used to consuming onion and garlic in their meals and do not find the food tasty when these are removed from the meal — their choices must also be kept in mind.

Third, this also raises the question as to who has the right to choose the menu and who cooks and serves the meals.

Groups such as the Right to Food campaign have always demanded that the cooking and serving of school meals (as well as in anganwadi centres) must be decentralised with involvement of local communities in finalising the menus, supplying raw material and cooking and serving the food. In this way, the community is more involved in the programme and there can be better systems of transparency and accountability.

There is no reason why the cooking needs to be centralised exposing it to the danger of cultural control on the one hand — as in the case of Akshaya Patra — and on the other, opening avenues for large-scale corruption through the nexus between politicians, bureaucrats and private contractors who are given contracts to serve food.

Even when the responsibility is given to non-profits, as in the case of Akshaya Patra, there is little transparency. While Akshaya Patra receives funds from the government for midday meals it serves, it also raises funds from all across the world for this purpose.

It is not clear what value addition to the meal is being made through these additional resources raised in the name of feeding children.

While there may or may not be any wrongdoing, the point here is that such large-scale involvement with a public programme warrants a certain level of transparency and accountability to the public, which is missing.

Two other related concerns also need to be mentioned. First, the midday meal scheme should be visualised very differently and in a more decentralised framework where it is seen as part of the larger food system.

Not only do menus need to be decided in a decentralised manner, but there could be conditions in the scheme that mandate that at least some portions of the ingredients need to be sourced locally.

For example, in Brazil, school meal programmes have made it compulsory for schools to buy at least 30 per cent of the ingredients from the local area. This could boost the local food economy by providing a guaranteed demand at a remunerative price for local farmers.

Such measures could also be used to improve the nutritional diversity of meals by including local millets, vegetables and fruits based on what is locally available.

Eggs can similarly be procured from local women's groups and poultry farmers. Providing such diverse meals can also have a demonstration effect to communities and families on how the nutrition content of food can be enhanced using local resources.

Second, one of the benefits of midday meals is also the socialisation opportunities that it provides. Children of different castes sitting together and eating and children of upper caste families eating food cooked by Dalit cooks could potentially contribute to breaking age-old caste barriers.

Removing the cooking and serving of the meal from locals and centralising it — that too giving it over to religious organisations whose primary concerns seem to be to maintain the hierarchical social order — is a regressive move.

As can be seen, this has resulted in the domination of upper caste norms of purity and vegetarianism on the larger community of children for whom these are not the concerns.

It is unfortunate that the National Institute of Nutrition (NIN), Hyderabad, also fell into this trap of biased concerns. Rather than condemning this kind of politicisation of food, NIN has said keeping onions and garlic out of food would not affect the nutritional value of food.

Surely, the NIN acknowledges that the food we eat is as much about its taste, appearance, memories, nostalgia and familiarity as it is about the calories, proteins, fats and micronutrients that it gives us.

It must be recognised that it is as much the right of children to have eggs, onions, garlic as it is for families which do not want these items included in their children's food.

It is ultimately a question of the right to choose what one eats and who controls the food system. The best way to enforce the right to choose will be only when the system is decentralised and it is based on broad guiding principles, yet has the flexibility to ensure that every child is included.