Controversy about degree of Pokhriyal : 'Education' is not third-party information 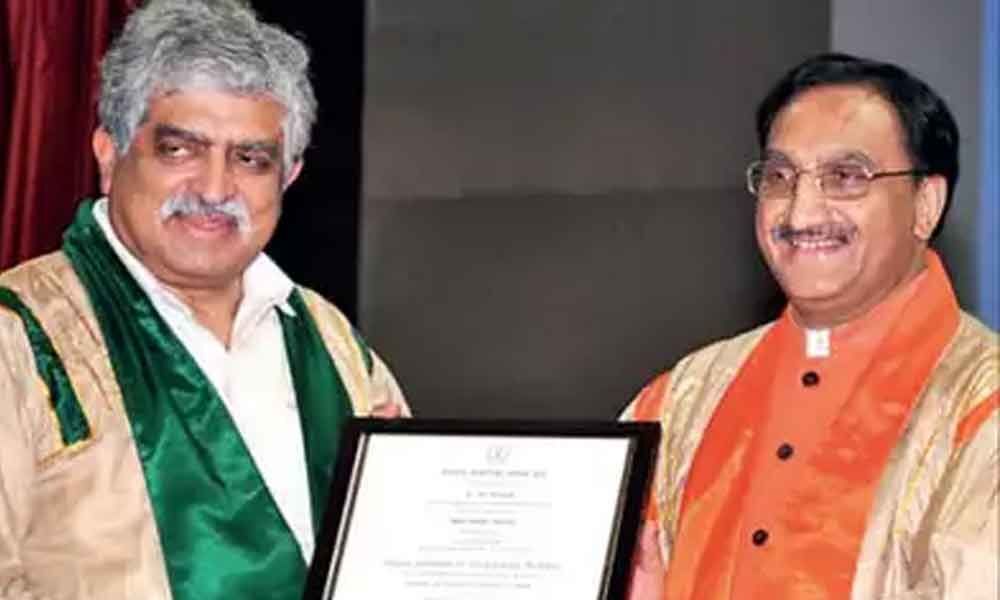 A poet and literary personality, Dr. Ramesh Pokhriyal Nishank, present Minister for HRD authored around 60 books in Hindi. During the 90s, the Open International University (OIU) of Colombo conferred a D. Litt for his contribution in literature.

Prior to that also he received a D. Litt degree from the same university for contributions in the field of science. It is reported that OIU is neither registered as a foreign university nor as a domestic university in Sri Lanka.

A BJP leader from Himachal Pradesh Manoj Verma has filed a petition on August 27 before President of India appealing for declaring his oath-taking as Cabinet Minister null and void based on allegedly 'fake' doctorate degree.

Verma objected that he should not have taken oath calling himself 'Dr Ramesh Pokhriyal Nishank", because prefix "Dr" will become fake when degree was fake, as that was given by a dubious university.

He also doubted the validity of Pokhriyal's MA and BA degrees. Pokhriyal's affidavit to the Election Commission, and his official website, claims that he did his master's from Hemwati Nandan Bahuguna (HNB) University, Garhwal, in Srinagar, Uttarakhand.

PS to HRD Minister Purushottam said the minister's BA degree was "not relevant" given that he had an MA from HNB Garhwal University, Srinagar in 1986 and 'he was conferred Doctorate (Honoris Causa) from Graphic Era University (Deemed to be University), conferred Doctorate (Honoris Causa) by Uttarakhand Sanskrit Vishwavidyalaya. He said that he did not have information about the BA at hand and undertook to provide later.

To an RTI request of Statesman reporter, the High Commission of India in Colombo stated that the "Open International University for Complementary Medicines in Colombo (Sri Lanka) is not recognised by the UGC of Sri Lanka.

It also has reportedly stated that the University was unregistered…fake, bogus or dubious education institute operating from Colombo". Indian Government has also not recognised this Sri Lanka based University.

A copy of the 1998 letter of Council of Scientific & Industrial Research (CSIR letter No. 17/66/27/94-PPS dated 18.11.1998) circulated to the heads of its national laboratory discloses, "I am directed to forward herewith a copy of letter No. OE/D/98/1381 dated 27.8.98 from Dr S.K. Jain, Director, Institute of Ethnobiology, C/o NBRI, Lucknow along with a copy of letter dated 12.8.98 from UGC regarding non-validity of D.Sc. Degree awarded by Open International University for Complementary Medicines, Colombo and informing that no recognition should be given to the Degree/Diploma or any other academic distinction conferred by this University, for your information and record."

The Council of Scientific and Industrial Research (CSIR) is an autonomous research and development agency working in the areas of science and technology has categorically stated that any degree given by the university should not be recognised. But the HRD Minister and Ministry ignores it.

The affidavit filed for contesting the 2019 Lok Sabha elections, Pokhriyal has disclosed about completing his masters from H.N.B Garhwal University but decided to mention his Doctor of Philosophy and Doctor of Literature degrees (both honorary), but it did not mention the university from where he obtained these academic qualifications.

After becoming Uttarakhand Chief Minister, he was conferred honorary degrees by the Graphic Era University and Uttarakhand Sanskrit University. Both these universities are recognised and hence he can use the prefix of 'Dr.' Fake universities and academic institutions will be rushing forward to award highest degrees to those who are in power. If people in power accept them it will lend undue credence to the bogus institutions, who can cheat millions.

Why University refused to give details?

A way to avoid such controversy is complete transparency. The University is not ready to disclose educational information of Pokhriyal. Madhukant sought information on 2.6.2014 about the MA degree, enrolment number and related copies of documents of Mr. Ramesh Pokhriyal, son of Late Shri Permanand Pokhriyal.

There was no response from CPIO of University. First appeal was filed. Then the CPIO and First appellate Authority gives response on same day i.e., 16.08.2014 denying it as third party information. This shows the University authorities have deliberately asked CPIO to deny this information.

Whenever high-profile personalities are involved, the authorities are denying information on the pretext of privacy or third party. Awarding degrees in University is public activity. From admissions to graduation, the Registrar must maintain register of records of every student and the purpose of registering is to maintain a public record, for reference and access.

Like land or property transaction documents, the degrees and related information also is in public domain. Though original degree certificate will be given to the candidate, its authentication details should be accessible in the register and no law prohibits disclosure of degree related information.

There is no record to show that the PIO of HNBG University has taken any independent decision on these lines prescribed by RTI Act, nor he gave any reason for the rejection.

We should know the judgment of Supreme Court Bench of Justice A R Dave and Justice L Nageswara Rao in Civil Appeal No. 2649 of 2016 in Mairembam Prithviraj v. Pukhrem Sharat Chandra Singh, quashing the election of Manipur Congress MLA, Mairembam Prithviraj for falsely declaring in his nomination papers that he had an MBA degree.

The Supreme Court held that right to vote would be meaningless unless citizens were well informed about the antecedents of candidates, including their educational qualification.

It said all information about a candidate contesting elections must be available in public domain as exposure to public scrutiny was one of the surest means to cleanse the democratic governing system and have competent legislators. The apex court has held that every voter has a fundamental right to know the educational qualifications of a candidate. The court noted that he made false declarations.

The University should have verified former CM's record before contending that the information sought was third party information. Once a student passes an examination and qualifies to secure a degree, the degree and passing details cannot be treated as private or third-party information.

HNBG University (Srinagar, Uttarakhand) was directed the to provide complete information about the MA degree of Pokhriyal as available with the University, before 30th December 2016.

The Manoj Verma's petition to President says such information was not furnished. Except an issue of propriety, there is nothing before President to invalidate oath of Pokhriyal.

One degree is enough for him to claim to be 'Dr'. He has four honorous causa degrees, even if two are from invalid University, it will not affect his doctorate. But University and Ministry has to give complete information about BA and MA as the 'degree' of accountability demands.