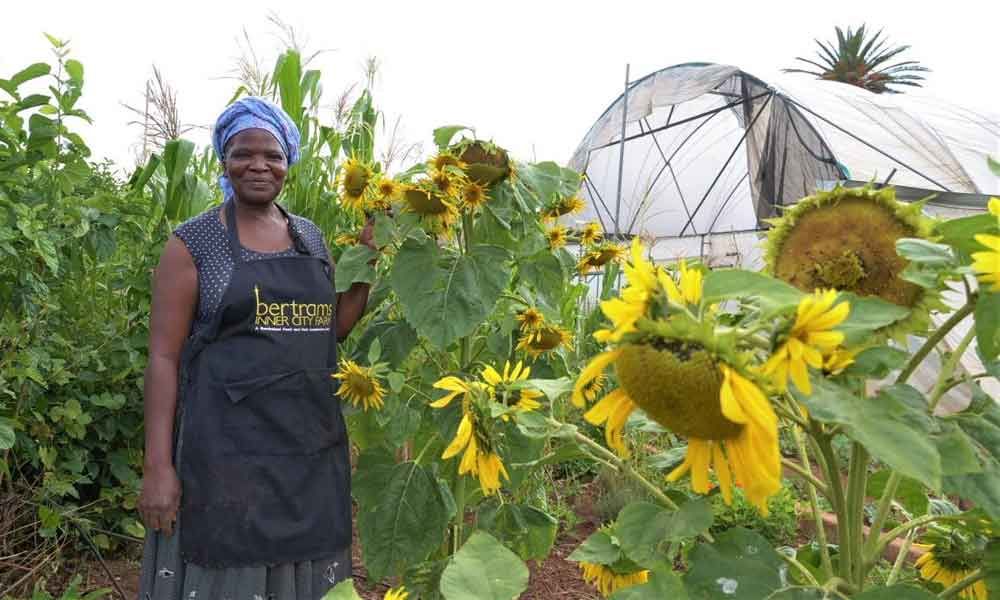 Whenever people walked by the overgrown bowling green in Johannesburg's working-class Bertrams neighbourhood, they saw an eyesore. But Refiloe Molefe...

Whenever people walked by the overgrown bowling green in Johannesburg's working-class Bertrams neighbourhood, they saw an eyesore. But Refiloe Molefe saw a chance to feed her community.

The 60-year-old former nurse has been farming on the 500-square-metre (5,380 square feet) bowling green for more than a decade, after she asked the city for food for the creche she was running for 15 children.

The authorities had none to give her, so she requested the land to grow her own instead.

"We may not have money, but we have land and food. And to garden here is our therapy," Molefe said, crushing a piece of rosemary between her fingers before smelling the leaves and smiling.

Seed by seed, Johannesburg - a city known for high crime levels and rapid urbanisation - is becoming home to a crop of urban farmers fighting concrete to grow fruit and vegetables so they can feed their families and neighbours.

The United Nations estimates two-thirds of the world's population will live in cities by 2050, up from 56% today.

And Africa is the continent urbanising the fastest, according to the Organisation for Economic Cooperation and Development (OECD).

Johannesburg, South Africa's biggest city with a population of more than 4.4 million according to the most recent census data, has grown nearly 40% since the previous census in 2001.

"There are people from Zimbabwe, Mozambique, Nigeria and Malawi here. We have the opportunity to grow food together, to live together and to eat together," said Molefe.

"But we need land to do this."

There are about 300 urban farms in Johannesburg, according to Nthatisi Modingoane, spokesman for the City of Johannesburg.

"We are seeing farms in schools, churches, clinics, rooftops and backyards," said Kesselman, who is also a raw food chef.

"It is a challenge, but urban farmers are bravely fighting hunger in Johannesburg."

According to the South African Cities Network, an urban development think tank, more than 40% of Johannesburg households are food insecure, meaning they are unable to access affordable and nutritious food.

Urban green spaces can bring significant benefits to cities, including cooling the outside air, filtering pollution, providing refuge from noise and reducing depression, anxiety and stress, according to the World Health Organization.

For Molefe, her garden is also where she nurtures a community.

On a single day, she was visited by a chef cooking with organic produce, a Kenyan woman whose husband asks specifically for Molefe's fresh vegetables, and two students returning from a trance party where they sold Molefe's vegetable juices.

Students from the nearby universities also popped in and out, some to farm and others to collect vegetables.

"Our students are so hungry," said Molefe. "How can they study if they are hungry?"

Molefe said the city should focus on making more urban farmland available so people can cultivate the food they need.

"If people live in tall buildings with no green spaces, how can they even think of growing their (own) food?" she asked.

Every week, she tries to feed as many mouths as she can.

She juices her produce - carrots, ginger, spinach, fennel and more - and sells the juices at markets around the city, while selling vegetables at a low rate to anyone who walks through her farm gates.

Any excess produce she puts in a car - along with expired but edible food collected from supermarkets by a local charity - and drives around the city handing out food to the homeless.

"These are not criminals," she said, stopping beneath a bridge where a group of men stood, trying to gather a few coins by washing car windscreens.

The men gathered around Molefe, smiling and thanking her as she handed out bread and apples.

"They are my children, and they are just hungry."

As proof that urban gardens are taking root and thriving all over Johannesburg, Molefe points to a hydroponic rooftop garden in Hillbrow that is feeding a local orphanage and a group of Rastafarians growing herbs on empty land in Soweto.

"This land used to be a dumping site," said Tali Mphuthi, one of the Rastafarian gardeners from Soweto, the city's largest township.

"I was unemployed before I asked the local council to let us farm here for free," he said, noting that his farming project has been running since 2006.

Now Mphuthi, 45, and four other farmers grow over 50 species of herbs on the site - including peppermint, lavender, lemongrass and verbena - which they sell to make their incomes.

"Farming here gives me the clarity I need in a community that faces many problems like crime and unemployment," he said.

South Africa sees more than 20,000 murders a year - the world's fifth highest murder rate in 2019, according to the United Nations Office on Drugs and Crime.

Molefe's dream is to run an orphanage on a bigger piece of land, where she can feed the children with what she grows.

"For now, my hands are my tractor. Imagine if I had a real one. I would grow so much!" she laughed.

Until then, she is training youth in the city to farm so they have the skills to feed themselves. As she works toward her dream, Molefe has hit some obstacles: crops destroyed by hailstorms, the occasional theft of her equipment and funding challenges.

Each time, she has been able to buy new seeds and tools with the help of prize money from various awards, including one given to her by European food company Nestle.

And, through all the challenges, it is her garden that gets her up every day.

"I need to feed the hungry souls of Johannesburg," Molefe said, grabbing a fork and walking over to a row of sprouting peanuts.