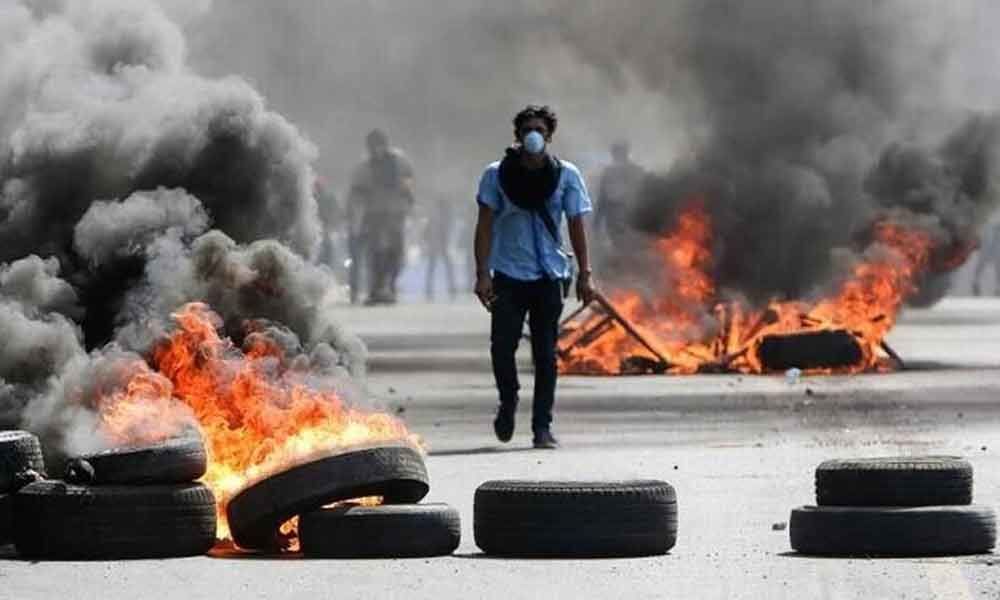 The General Election this time has been marked by a significant amount of violence in the run-up to the polls in several parts of the country.

The General Election this time has been marked by a significant amount of violence in the run-up to the polls in several parts of the country.

The bitterness amongst the contesting parties in states like West Bengal, Andhra Pradesh, Uttar Pradesh and Maharashtra precipitated clashes between rival workers testing the efficacy and impartiality of the local police.

The institution of the State Electoral Officer did not seem to be strong enough in monitoring the performance of the district police officials and taking action against those who showed serious dereliction of duty.

Violence around polling booths is a negation of democratic rights of the voters and by now India should have been able to practice zero tolerance towards this malaise.

It is high time a commission examined the ways and means of ensuring peace during elections and defined specific policy measures in this regard for the future.

It is highly regrettable that the largest democracy in the world cannot free the election process of street level violence.

Clearly in the federal scheme of things it is the state police chief who has to take direct responsibility for it and demonstrate his or her apolitical credentials while handling law and order during elections with an iron fist.

There should be no delay in the implementation of the Supreme Court order issued last year against the practice of appointing officiating DGPs - that also clearly laid down that the UPSC will draw up a panel of three names in consultation with the state government and that the state government will make one of them the DGP of the state on the basis of merit-cum-seniority.

This is the single most important police reform that the Centre must put in place at once.

Another area of political violence that showed up during and outside of elections, concerns the injurious fallout from public speeches that tended to instigate caste, communal or regional conflicts.

Pungent wit and some name calling without violating the law of defamation could be a legit part of electioneering but deliberately indulging in identity politics and questioning the symbols of nationalism became much too obvious in the poll fray this time.

India is vulnerable to communal and caste tensions and freedom of expression cannot be allowed to cross the legal limits put on it by the Criminal Law Amendment Act of 1972 that created Sections 153A & 153B to define cognizable and non-bailable offences pertaining to sectarian speeches.

The police machinery of the districts has to be strengthened a great deal with manpower and technological equipment to enable it to handle this rampant criminality committed by the people in public life today.

Follow up on the blatant violations of law noticed in this General Election should continue even after the poll process is over.

The most dangerous form of political violence that is steadily permeating our nation, however, is the rise of new terror emanating from faith-based motivation.

Terrorism by definition is the resort to 'covert violence for a perceived political cause'. In the absence of such a 'cause' the violence will just be sheer criminality and terrorism is not that certainly.

A cause demands 'commitment' which in turn is rooted in 'motivation'.

India has seen diverse motivations behind terror movements and insurgencies - 'ideological' that sustained Maoism or assertion of 'ethnic identity' that was the case with North-East insurgent groups - but the new global terror that is now afflicting the world and becoming a prime security threat to India is a class apart since it is linked to the call of 'defence of Islam' or Jehad.

This is an outcome of the complications connected with the 'war on terror' launched against the Islamic radicals by the US-led West post 9/11 on the one hand and the cross border terrorism started by Pakistan to settle scores with India using India- specific terror outfits under the ISI control, on the other.

Developments in recent times have made Pakistan the world repository of Islamic militancy and the agencies in that country are now manoeuvring the entire spectrum of militants from Al Qaeda-Taliban combine and ISIS at one end to Lashkar-e-Toiba and Hizbul Mujahideen at the other.

The keenness of the US to work for withdrawal of American troops from Syria and Afghanistan has given a lot of residual advantage to Pakistan in terms of its plans to use Islamic militants as a strategic resource for furthering its foreign policy objectives.

India has much to feel concerned about the way US was relying on Pakistan to reach a settlement with Taliban.

While this is the scene in Afghanistan the recent terror bombings against Christians and Western tourists in and around Colombo have been claimed by ISIS.

What is more significant, the local radical outfit, the National Tawheed Jamaat, complicit in this covert offensive in Sri Lanka is found to have links with Pakistan and South India.

It is already known that Al Qaeda in Indian Subcontinent (AQIS) operating out of Pakistan with patronage from ISI has the avowed aim of establishing Islamic State in Pakistan, India, Bangladesh and Myanmar.

India, unlike the US, is directly in the arc of Islamic militancy and needs to strategise for national security against this new threat of faith-based terror.

It is extremely disquieting that political discourse in India - and this became sharper in the election campaign - has tended to drag Pakistan into the discussions on minorities here.

This trend has started from Jammu and Kashmir where the regional parties have openly advocated a communally-based 'solution' by talking of the Valley and not about the integral state of J&K that is home to many religions.

They have strengthened the hands of Pakistan which finds it convenient to project Kashmir as a Muslim issue and create communal divide in the domestic politics of India.

The same effect is produced by some opposition leaders at the national level who criticised the 'muscular ' policy of the Modi government towards Pakistan but maintained deliberate silence on the infiltration of terrorists by Pakistan's ISI across the LOC to create violence in the state.

The campaign for General Election this time has deepened the communal antagonism on majority-minority line and left the country vulnerable to Pak machinations to generate militancy as a byproduct of communal disharmony.

In the initial decades after Independence, India witnessed communal riots primarily because of the legacy of Partition but these subsided as the democratic processes took firm root and equality of rights played out for everybody.

The rise of new global terror that invokes the cause of Islam has made it possible - particularly because of the mischief of Pak agencies - for radicalisation to seep into India, howsoever small may be its spread in the country so far.

The events at Colombo come as a wake-up call for our security set-up.

Various communities of India at the level of average citizens want to lead a peaceful life and make use of whatever opportunities of economic advancement that would become available to them.

It should not be difficult to achieve a convergence amongst all communities on the external threats to national security if the leaders of the communities did not seek political power by dividing the people.

Our laws and security policy should provide for quick punishment for those who tried to gain from the advocacy of violence in course of projection of religion into politics.

Our ruling dispensation should be upfront about it - this seems to be a major learning from the 2019 national election.