Will BJP listen to Advani's advice? 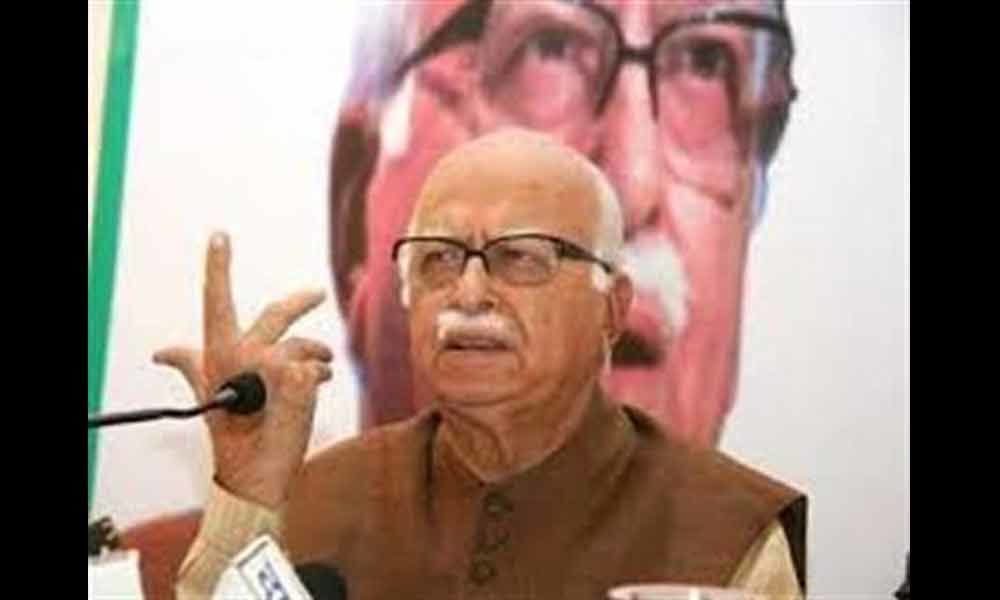 It would have been better if L K Advani had given his excellent advice to his party men about their attitude towards other parties before being denied a Lok Sabha ticket.

It would have been better if L K Advani had given his excellent advice to his party men about their attitude towards other parties before being denied a Lok Sabha ticket.

Now, it would appear that the nonagenarian former Deputy Prime Minister was expressing his resentment by criticising the party for not choosing him as a candidate for yet another term in the Lok Sabha.

Even then, the validity of his advice remains unimpaired. But will his party listen? Going by initial reactions, there is no sign that the BJP has accepted the central point of his charge that political opponents are not anti-nationals.

Instead, at least one spokesperson argued on TV that if the Congress sided with the "tukde-tukde gang" or those who want to break up the country, then it can be called anti-national.

Ever since the BJP's victory in 2014, it has apparently interpreted its majority in the Lok Sabha and also that of the group by it, the National Democratic Alliance, as a stamp of approval by the voters of the party's nationalist credentials, a claim which automatically places the losers in a less exalted category.

The BJP's nationalist assertions have also gone hand-in-hand with the contention that its 2014 victory marked the end of 1,200 years of the nation's subjugation by the Muslims and the British.

The BJP has also been insisting that "nothing" had been achieved by its predecessors since 1947.

It is obvious that such grandiloquence is behind the categorisation of the BJP's critics as "anti-nationals".

The label fits in with the party's own macho nationalism whose primary target at the moment is Pakistan. Hence, the occasional advice given to the "anti-nationals" to go to Pakistan.

It is not surprising that the Pakistan angle tends to envelop the Indian Muslims as well, which is why a BJP MP, Vinay Katiyar, wanted them to go to Pakistan or Bangladesh, and UP chief Minister Yogi Adityanath has made a neat division of Indians into "Bajrang Balis" or Hindus and "Alis" or Muslims.

One of the effects of a propaganda of this nature centred on the ruling party's projection of itself as the country's sole saviour is the creation of a surcharged atmosphere where the enemy is seen to be lurking in every nook and corner.

In the BJP's view, there is also an unholy alliance between its most strident critics and the illegal immigrants or "termites", as they have been called. The nexus is said to be for the purpose of securing their votes.

Given the focus and the intensity of the BJP's present worldview, it is doubtful if Advani's counsel for toning down the party's rhetoric will be heeded. Ironically, Advani himself was once a hardliner, having charioted a rath in order to mobilise the opinion of Hindus for demolishing what he called the "ocular provocation" of the Babri Masjid. It was in his presence in Ayodhya that the ancient mosque was brought down by the kar sevaks on December 6, 1992.

That may have been a cathartic experience for him, for he gradually turned into a moderate a la Atal Bihari Vajpayee and began to show his appreciation of India's diversity.

It is this aspect of India's persona which Advani has stressed in his latest blog where he has emphasized that a political battlefield does not envisage the annihilation of the enemy. Instead, it is more like the jousting on a field of sports where today's victors can be tomorrow's vanquished and vice versa.

If the BJP's first stint in power at the centre did not see the party engage in the kind of virulent confrontation with the opposition as at present, the reason was the presence of the amiable Vajpayee at the helm.

What has changed since then is, first, the assumption of power by a new set of saffron politicians who are apparently less tolerant of dissent than their predecessors.

Secondly, the Congress's decimation in 2014 preceded by the Manmohan Singh government's policy paralysis in the run-up to the elections had fostered the impression that the party was a sinking ship.

Hence, the BJP's declaration after its victory at the centre and in 19 states that it was ready to rule for half a century from panchayats to Parliament in a Congress-mukt India.

How much of its haughtiness will remain in the aftermath of the forthcoming general election will depend on the results. But, irrespective of whether it can repeat its 2014 performance, as an analyst has said, or fail to get a majority of its own, as some opinion polls have predicted, the BJP should pay heed to the advice of an elder statesman.

(Amulya Ganguli is a political analyst. The views expressed are personal)