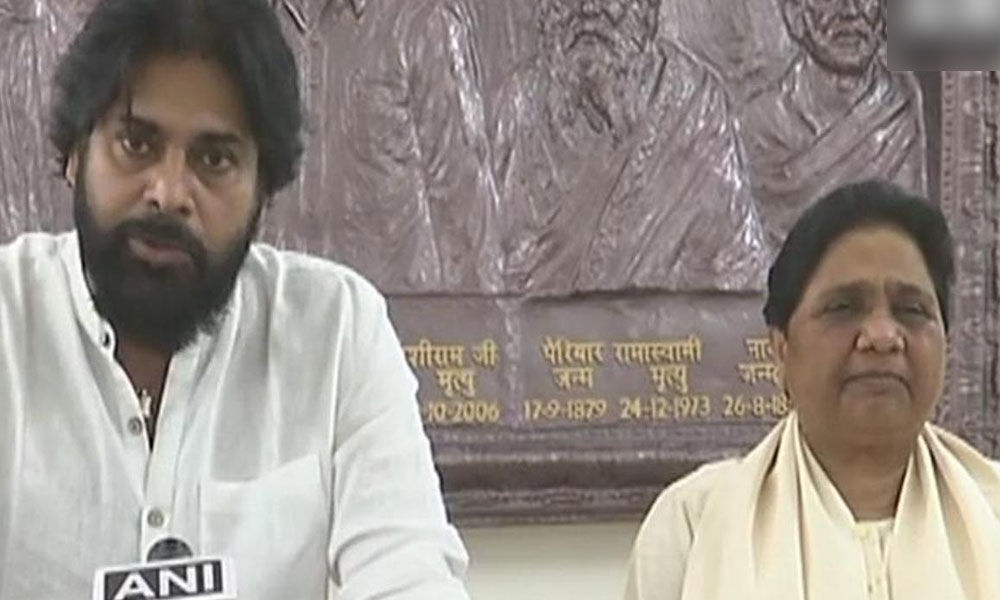 The emergence of amalgamated political platform through politically galvanising the Jana Sena Party with the Bahujan Samaj Party may escalate...

The emergence of amalgamated political platform through politically galvanising the Jana Sena Party with the Bahujan Samaj Party may escalate different political calculations in state politics of Telugu states – Andhra Pradesh and Telangana. Pawan Kalyan an actor turned politician has a considerable amount of fan following in which majority turned to be the base support of the party which he founded on 14 March 2014.

Exactly after 5 years and day one of its emergence, he took a stunning and politically vibrant turn to be with the Bahujan Samaj Party (BSP) as an alliance and continue his political march with it. Pawan Kalyan through his filmy image, portrayed as a person who can go to any extent to oppose injustice and promoted the concept of common man/woman and fight for rights of human beings.

As a filmy character, he acted in many movies as a youth from marginal sections and hailed mass and lower middle class societies. That's how, his fan following largely emerged from these sections and support base not only from the youth but also from parents of these sections. He struggled a lot for about five years and he might be come to a point that might have led him to strengthen further his political base through aligning with ideologically similar political positions.

He also might have thought that the regional or state level politics may not be substantiated to achieve with his political objectives which he set on broader agenda of social justice and equitable distribution of power. But aligning or merging with regional point may not serve his purpose as he largely promoted a concept of equitable social justice through distributive political power as a reason of his stand with BSP.

He might have find nothing except BSP as it largely comprises similar ideas of politics. Moreover, the BSP has also been struggling to find influential leadership in south India since its beginning but it could not find till then.

This reason may have stimulated BSP's top leadership to act promptly on the idea or plan of political alliance with Pawan Kalyan who has strong mass base in contemporary politics of Andhra Pradesh. Combining these two political elements in state politics of Telugu land, especially in Andhra Pradesh may lead to new political calculations in electoral politics. By social identity, Pawan Kalyan came from a predominant Backward Classes and the BSP has also strong base support of OBCs, Dalits and Adivasis and minorities to some extent.

The caste composition of the state, according to the census 2011, 39 per cent are from the social strata of upper layer. Within this composition, Kapus consists of 15.2 per cent which is highest among upper social strata followed by Reddy (6.5 per cent), Kamma (4.8 per cent), Velama and Balija (6 per cent) about 7 per cent of Brahmin, Komati and Kshatriya. But, interestingly, the proportion of Backward Classes is about 37.8 per cent.

The demand for reservation is largely viewed from Dalit-Bahujan perspective. The perspective may attract the community of Kapu towards the politics of Dalit-Bahujan as the demand for reservation to this community is largely centered on Ambedkar ideology and moreover the forerunner of the movement has even been given due consideration to Ambedkar idea of social justice. Then the political calculation may change the strength of upper strata layer from 39 per cent to 23.8 per cent as the Kapu may shift to Bahujan platform.

In that case, the existing strength of OBC may rise up to 53 per cent. The combination of Dalits (17 per cent) and Adivasis (5.53 per cent) which constitute 22.53 may also align with OBCs politically. Thus there would be at least 75-76 per cent in Bahujan social strata. If the political alliance of Pawan Kalyan and BSP could attract at least 50 per cent of the total from this section of the society there would be a possibility to get at least 30-40 MLAs and 6-8 MP seats even in worst politico-electoral settings.

If the electoral strategy links grassroots' cadre there would be a different picture altogether. The reason is that the combination would largely reflect pragmatically the concept of social justice in representational politics, if the contested candidates win in ongoing general elections of Legislative Assembly and Lok Sabha in the state of Andhra Pradesh.

If the experiment succeeds as it was expected by the collation then the results would lead to form alliances in other states especially in Telangana where the representation in legislative Assembly as well as Council and Lok Sabha from these marginal social sections – SC, ST and OBCs is very less. The reason is that majority of these sections looking for political support from mainstream politics but the politics largely dominated by traditional landholding classes. In this gap of representational politics, Jana Sena Party has a potential to fill the gap and also there is possibility to occupy the space of mainstream politics.

These two elements (Pawan and BSP) have raised political aspirations of people, especially among the leadership line of SCs, STs, OBCs and Muslim Minorities. These social groups have been in thirst of political power since political independence as majority politics and power game has been largely shared between Reddy, Kamma/Chowdhary, Velama, Brahman and other Kapus in Telugu states.

But in the case of Pawan Kalyan, alliance with BSP has a possibility as it has focused on the idea of development and welfare of Dalit-Bahujan. In terms of marginal sections' political aspirations, if there would be a prompt political strategy adopted and applied in the present electoral politics of and Assembly and Lok Sabha elections the results would definitely be stunning.

There has been a long queue among SC, ST, OBC and Muslim Minority leaders to get into power politics but even today the aspirations of these communities have not been realized. This is the central thrust of Pawan-BSP in Telugu politics which has to calculate the game of politics in a very calculated manner so as to get succeed in number game of politics.

The combination seriously leads to different other political galvanizations by other political parties which are largely dominated by dominant social classes in these states. But, the outcome which he brought through amalgamating his political ideas with BSP is very important to present politics as majority social groups have been kept far away from political power. His immediate announcement at Lucknow has also different political strategies through which he turned political scene of upcoming parliamentary elections' campaigns vibrant instead of one sided.

( The author is Assistant Professor, Council for Social Development, Hyderabad)