Threats to representative form of government 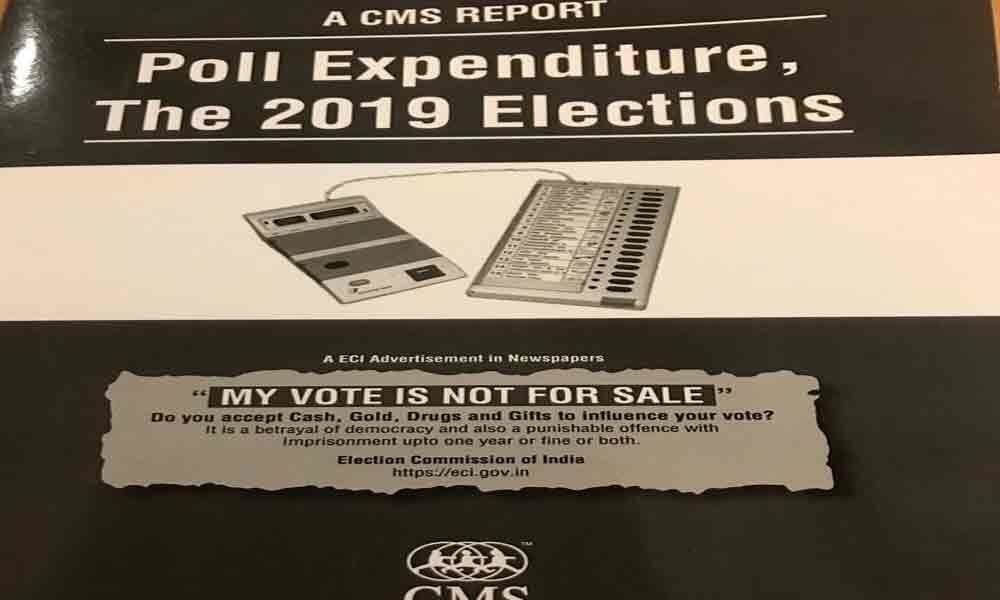 The pathbreaking research titled 'Poll Expenditure, the 2019 Elections' conducted by New Delhi based Centre for Media Studies (CMS) on the recently...

The pathbreaking research titled "Poll Expenditure, the 2019 Elections" conducted by New Delhi based Centre for Media Studies (CMS) on the recently held general elections signals threats to representative form of government according to SY Quraishi, a former Chief Election Commissioner of India.

Quraishi, in his introduction to the CMS research, says that It reveals the linkages between election expenditure and the exorbitant levels of corruption that citizens have to bear within the next five years while availing basic public services. The report has been brought in the form of a monograph and was released in Delhi couple of days ago in the presence of several luminaries.

CMS which has 30 years of active and hectic pursuits, as an independent institute and research-based think-tank, headed by Dr N Bhaskar Rao as its Chairman, has been studying election campaigns and election expenditure for over two decades. CMS many a times indicated that election time expenditure is mother of all corruption in the country. The details of the report are quite interesting.

The report says that the 2019 election, the process of which stretched over 75 days, emerges to be the most expensive election ever, anywhere. In this election the number of voters increased to 902 million and the number of polling booths to over a million, but the overall voter turnout was not that impressive.

Never before the candidates, leaders and parties, and even the news media, were so much in violation of model code of the Election Commission of India (ECI). Throughout the campaign period, news channels showed intensely and frequently of confiscation of cash, gold, silver, liquor, etc. observed the report.

The number of millionaire candidates contested in the elections continued to be prominent, as was the case of those with criminal background. A high percentage of voters acknowledged or confirmed themselves receiving cash for their vote directly for the first time. It is confirmed that direct bank transfer of money on the eve of poll has become a new route to lure voters in the name of one or more schemes by government.

Instances were more of some key party functionaries referring to the amount spent by their own party, how much voters were paid and how much all parties together spent. The other development which contributed for increased poll expenditure include introduction of electoral bonds to facilitate contribution of corporates for poll funding in anonymity, removal of ceiling on corporate contribution, allowing contribution of foreign corporate in India for campaigns, etc.

ECI has elaborate system of surveillance and tracking at district level, local level and other levels. How is all this information is being used and what action taken for violations and excesses either in the earlier or recent elections was not clear.

In fact, in the recent elections ECI further strengthened its apparatus, including by appointing more expenditure observers from income tax and revenue departments. It confiscated twice more cash, gold, liquor, than in 2014. But there is no evidence that those initiatives made much difference on the expenditure on poll campaigns.

This poll witnessed considerable hectic campaigning a couple of weeks before the ECI notification on March 10, 2019. That expenditure also deserved to be included. This includes expenditure on advertising in media in the specific context of elections. Of course, there were some channels both at the Centre and in some States, who continued even after the ECI notification as dedicated propaganda entities. Then there were solo hour-long interviews on different national channels in between the poll phases of special poll relevance. The dilemma was whether these costs were to be included?

CMS has evolved a PEE approach (Perceptions, Experiences and Estimation) of enquiry, to reasonably arrive at what goes in or involved in different activities at different points of campaign and category of pockets or different constituencies.

It was this PEE model approach, which helped to come up with more reliable estimates on corruption involving citizen in availing basic public services. Based on primary and secondary inputs, assumptions were made about what percent of voters were distributed and how much was distributed per voter elaborated the report.

Fifteen to forty per cent voters were distributed in a sizeable number of segments, sub-segments of constituencies. Amount distributed depended on the keenness of contests, profile of candidates and the region. Even with in a constituency, there were different levels.

Although the number of candidates per seat were more than three in most, expenditure of only two candidates in most seats was included. For the other only a nominal expense for nomination and campaign was considered. All were paid in cash. Some were offered promises, including positions or patronage. Ten to twelve percent of voters acknowledged receiving cash directly. But two-third acknowledged that voters around them also received cash for their vote.

On an average, nearly Rs 100 crores per Lok Sabha constituency, has been spent. Overall, it is estimated about Rs 700 per vote was spent. As the number of candidates who are millionaire and with business interest has been on increase in the recent elections, a higher percent of expenditure is being borne by candidates themselves.

There are many cases of candidates contributing to the party or and meeting some campaign costs of some other candidates as well. Some candidates are funded by the party. More than one-third of all poll expenditure could be described as unaccounted for.

According to the report, in 20 years, involving six elections to Lok Sabha between 1998 and 2019, the election expenditure had gone up by around six times from Rs. 9,000 crores to around Rs. 55,000 crores. It is interesting to see how the ruling party gears up to spend much more than other parties in Lok Sabha poll.

In majority districts of Andhra Pradesh voters were paid together for Assembly and Lok Sabha. In AP, four (of 13) districts (two in Godavari, Krishna and Guntur districts) more than half of voters were paid on an average and paid anywhere between Rs 1000-2000 per vote. CMS estimated Rs 5,000 crores expenditure for the Assembly poll in Telangana in December.

As voters were disbursed money in the Assembly polls, this Lok Sabha poll involved a lower percent of expenditure. CMS feels that, except symbolic confiscations at some places there was no stern initiative of ECI. Unless it demonstrates it powers, it cannot expect to make the difference.

If ECI remains a silent spectator when parties and candidates do not observe its directives, what is its sanctity? It is high time that Parliament deliberates on poll expenditure for campaigns, and about election funding, preceded by serious national discussions.

As political party and candidates and even the governments are not enthusiastic to curb and curtail poll expenditure, it is for citizen and civil society to take up the issue concluded CMS. According to Suresh P Prabhu, former Union Cabinet Minister, CMS report quantifies something we know about that money is used to lure voters. But not as an issue threatening the very free and fair character of our elections. The scale of this menace as revealed here should scare every right-thinking citizen of the country.