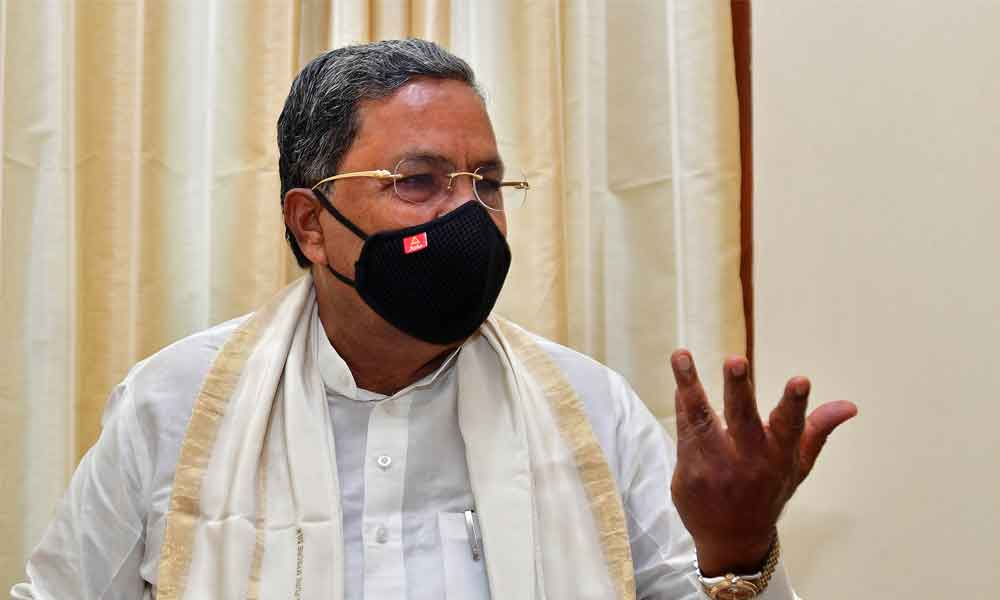 A day after Rural Development and Panchayat Raj Minister K.S. Eshwarappa complained to the Governor that Chief Minister B.S. Yediyurappa interfered in the affairs of his department by allocating Rs 774 crore to various MLAs without his approval, Leader of Opposition and former chief minister Siddaramaiah demanded President’s rule in the Karnataka State.

Bengaluru: A day after Rural Development and Panchayat Raj Minister K.S. Eshwarappa complained to the Governor that Chief Minister B.S. Yediyurappa interfered in the affairs of his department by allocating Rs 774 crore to various MLAs without his approval, Leader of Opposition and former chief minister Siddaramaiah demanded President's rule in the State.

"The allegations made by the senior minister are of serious nature. Governor should intervene, dismiss the government and recommend for the President's rule. Eshwarappa has provided evidence of the State BJP corruption, nepotism and irregularities. We have been saying this since the first day and their own party ministers are repeating now. For the first time in his political career, he has done a good job," the former CM said.

Siddaramaiah said that Eshwarappa had shown that State's interest was more important than his political career.

"Corruption, nepotism and irregularities are not just limited to the State government but a disease which has infected the entire administration under Yediyurappa. BJP should provide a fear free platform for other BJP leaders also to express themselves," he said.

Since the minister has taken up the issue with Prime Minister Naredra Modi and BJP president J.P. Nadda, the senior Congress leader demanded that BJP respond and 'uphold internal democracy'.

"@ikseshwarappa has detailed in the letter that corruption is the reason for govt's bankruptcy and not #Covid19. This clearly indicates that while few powerful within BJP are getting rich, people of Karnataka are becoming poor. Mr. @PMOIndia @narendramodi. You had called our govt as 10% sarkar. Now that your own party minister has given the corruption report of your own party to you, give your rating about the govt so that people can make informed decision in the coming elections," Siddaramiah tweeted.

After the High Court gave the green signal to investigate "Operation Kamala" incident, Siddaramiah said that it vindicated Congress's position that the State BJP government was the result of unholy political practices using money and muscle power.

"A thorough investigation has to be conducted into the Operation Kamala where BJP leaders supposedly tried to lure MLAs by offering crores of money," he added. The embarrassment for Yediyurappa is growing in the aftermath of cabinet expansion when the disgruntled leaders came out in the open to express their dissent. The sex scandal allegedly involving Ramesh Jarkiholi has given another blow to the government.