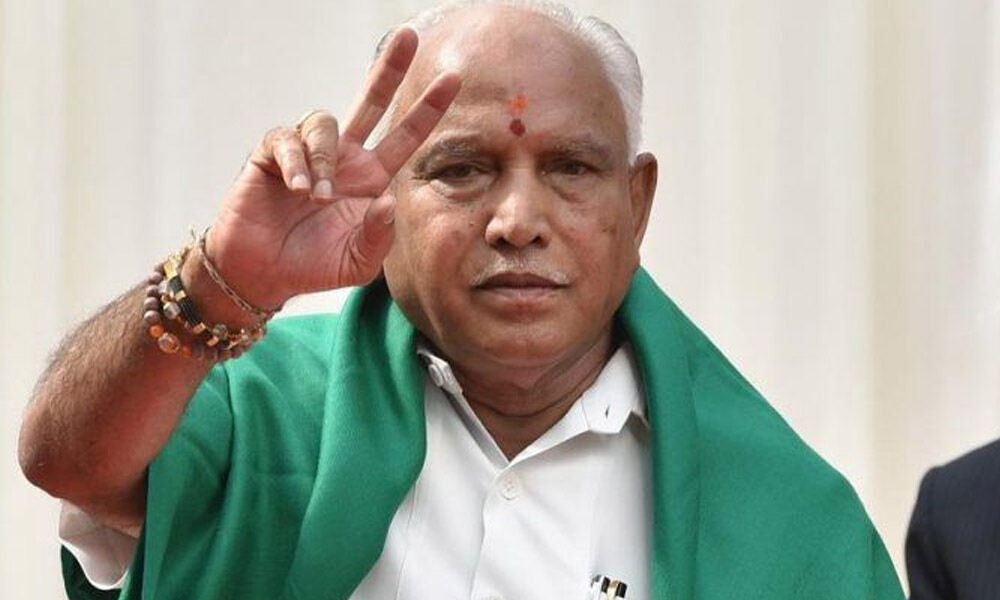 In a relief to Karnataka Chief Minister B S Yediyurappa, the Supreme Court Monday stayed the criminal proceedings against him and others in a corruption case of allegedly de-notifying a parcel of land to benefit private parties.

Bengaluru / New Delhi: In a relief to Karnataka Chief Minister B S Yediyurappa, the Supreme Court Monday stayed the criminal proceedings against him and others in a corruption case of allegedly de-notifying a parcel of land to benefit private parties.

A bench of Chief Justice Bobde and Justices AS Bopanna and V Ramasubramanian also stayed the March 17 order of Karnataka High Court restoring the criminal case against the Chief Minister and others in the matter. "Issue notice. In the meantime, there shall be stay of operation of the impugned order as well as stay of further proceedings in the Criminal Case," the bench said and tagged the plea filed by Yediyurappa with a related case in which the top court had earlier granted protection from arrest to him.

During the hearing, senior advocate KV Vishawanathan, appearing for the Chief Minister, said it was a bona fide decision, taken in discharge of official duty. The bench told Vishwanathan he may argue that it was a bona fide decision but it needs to examine the matter and hence, has issued notice to other party. Vishawanathan said the high court order needs to be stayed otherwise the trial court will proceed in the matter. The bench said he should listen to the order properly as it has stayed the proceedings.

In his appeal, Yediyurappa has contended that no prior sanction to prosecute him was taken and the high court ought to have considered this fact. On March 17, the high court had set aside the order of the special trial court refusing to take cognizance of a private complaint filed by one M Alam Pasha. It had directed the special trial court to take cognisance of offences against Yediyurappa and proceed further in the matter on the basis of charge sheet filed by the Lokayukta Police in 2012.

The private complaint against Yediyurppa alleged that during his tenure as the Chief Minister from 2008-12, he had illegally de-notified 20 acres from land acquisition proceedings to give undue favours to private parties. The trial court had earlier refused to accept the complaint against Yediyurappa and others after a closure report was filed by the police in the case. Pasha then moved the high court for restoration of the case contending that the trial court has refused to take cognizance of the complaint against Yediyurappa despite the police charge sheet against him and closure report was filed with regard to other nine persons. In a related case, the top court had on January 27 protected Yediyurappa and former minister for industries Murugesh Nirani from arrest in a case pertaining to alleged forgery over withdrawal of approval for a parcel of land in the state.

It had however refused to stay the January 5 order of Karnataka High Court, by which it had allowed restoration of the criminal complaint against the Yediyurappa. On January 5, the high court had partly allowed a petition by Pasha and accordingly set aside the August 26, 2016 order of additional city civil and Sessions judge related to three of the four accused, including Yediyurappa, dismissing the complaint against them.

Initially, the lower court had in 2013 dismissed a complaint filed by her on ground that sanction to prosecute the accused had not been obtained. She filed a fresh complaint in 2014 after Yediyurappa demitted office, but it was also dismissed by the lower court on August 26, 2016 on the same ground, though giving liberty to approach the court after getting prior sanction from competent authority. Pasha had submitted that since the respondents were no longer in office, sanction for their prosecution was not necessary.

The high court had concurred with her submission and ruled that the quashing of the earlier complaint for want of sanction would not act as a bar to maintain the latest complaint filed in 2014 after the respondents demitted office. It directed the complaint to be restored in file and said that the same shall be proceeded with in accordance with law.