Ganesha loves Modak! Did you know why? 6 different Modak recipes and Laddoo recipes you must try 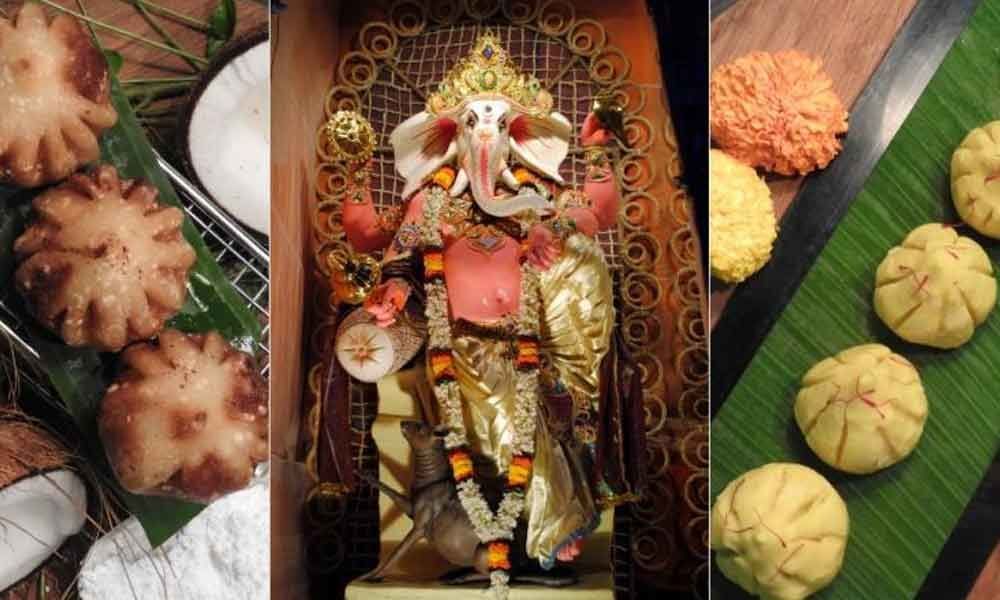 Festival sees devotees offering deity various sweets and savouries amongst which modaks make for the most prominent prasad of the festival.

Festival sees devotees offering deity various sweets and savouries amongst which modaks make for the most prominent prasad of the festival.

As per the rituals, 21 modaks are offered to the benevolent God and eventually served to devotees.

Modaks are Indian dumplings and are a special treat to the elephant-headed God and his devotees.

The festival sees devotees offering the deity various sweets and savouries amongst which modaks make for the most prominent prasad of the festival.

According to Hindu mythology, modak is believed to be Lord Ganesha's favourite, thus his name Modakpriya (One who likes modak) in Sanskrit.

As per the rituals, 21 modaks are offered to the benevolent God and eventually served to devotees.

Modaks are steamed or fried dumplings made from rice flour, wheat flour, and have fillings including grated coconut and jaggery.

Modaks are generally offered to the idol and then served as Prasad to the devotees. Steamed modaks are also known as Ukadiche Modak and are slathered with hot ghee before savouring it.

According to legend, Shiva and Goddess Parvati were once graced by the demi-gods and presented with a unique, divine modak.

The modak was up a notch since it had the ability to bestow the person eating it with incredible knowledge of science, scriptures, art, and writing.

The period of celebrations has arrived and that basically implies there are loads of desserts to gorge on. On the off chance that you also are a Lord Ganesha lover, we reveal to you how you can intrigue him by making these delectable assortments of modak this Ganesh Chaturthi

The closer we come to completing one more year, more the motivations to celebrate. Come August and September and the period of celebrations coaxes our heart, soul, and in particular, our sweet tooth!

Kick-beginning the celebrations is Lord Ganesha who is arriving this September 2 to favor us with his quality. Thus, it is extremely essential to put your best foot forward and intrigue him (and your loved ones) by setting up his most loved modaks and laddoos.

There is a reason Lord Ganesha cherishes modaks to such an extent. According to legend, when the 'devas' came to visit master Shiva, godess Parvati offered them a perfect modak. This modak was very unique on the grounds that the individual who ate this modak would end up knoweldgeable in all sacred texts, science, composing and craftsmanship. What's more, as the legend says, when solicited the genuine importance from commitment, ruler Ganesha had communicated the dedication to guardians is a definitive structure. Parvati, dazzled with his answer offered this uncommon modak to Ganesh and this is the first run through bappa began to look all starry eyed at this sweet.

Along these lines, think about what's superior to having only one assortment of modaks this year – having six! Here are 6 flavorful assortments of modaks and laddoos that are too simple to make, and rest guaranteed, Ganpati Bappa cherishes them as well!

The conventional Maharashtrian prasad for Lord Ganesha, steamed modaks are nothing not exactly unadulterated sweet rapture! These coconut and jaggery filled dumplings are the universally adored during the celebration.

In addition to the fact that they look lovely taste stunning as well. Truly, it takes a couple of preliminaries to consummate the craft of making the ideal Ukadiche modak, however we guarantee this basic ukadiche modak formula will make it significantly simpler!

What happens when you add a dash of chocolate to something? It just turns into a dish nobody can stand up to! If its all the same to you testing and need to add a chocolatey bend to the conventional, humble modak, here is the ideal fix. Not exclusively are chocolate modaks cherished by many, they are delish as well!

You don't have to binge spend or spend a bomb to make these sweet treats. Rather, attempt this simple chocolate modak formula in the solace of your home. With children, however chocolate modaks are a hit with adults as well!

Note: A case of custom made chocolate modaks can likewise make the ideal Ganeshotsav blessing! Look at all the more such imaginative blessing thoughts for Ganesh Chaturthi!

How might you turn out badly with whatever is sweet and broiled? These firm sweet dumplings are comprised of khoya, dryfruits, coconut and the integrity of jaggery. They look incredible and taste far superior. Making singed modaks is too simple too!Fried Modak

Alongside your customary mithais, offer this assortment of modak to Bappa.

All things considered, on the off chance that you are the wellbeing cognizant one and don't care for enjoying a lot of sweet gorging, diet modaks are here to your salvage. The best part about these modaks is that you don't have to settle on the taste and yet, you can essentially chop down the calories!

You don't have to pick among wellbeing and party when both can go connected at the hip!

The rich taste and surface of khoya takes your modaks to just another level. They are genuinely easy to make and simple to shape. These modaks are to a great extent famous as the prasad utilized during Ganpati puja.

What's more is that you can try different things with shape, size and flavors. You can likewise transform this khoya modak into another sweet called 'peda'. Bappa adores both!

What's Lord Ganesha's second most loved sweet? Laddoos! Truly, change up your plate of desserts and incorporate these delectable choco-coconut laddoos as an offering for Ganpati Bappa this season.