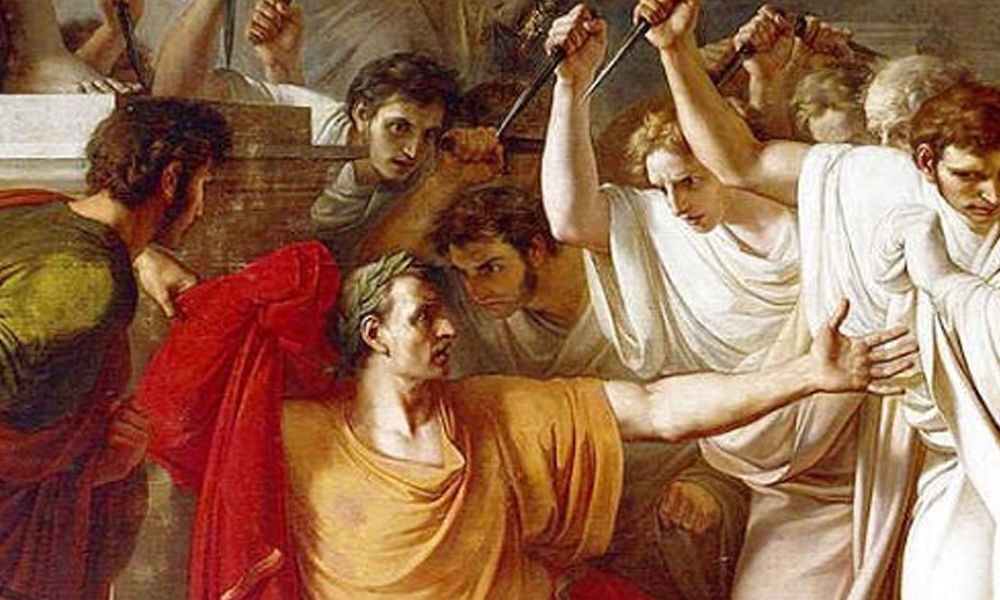 Gaius Julius Caesar the most significant figures in Western history was assassinated today, i.e. on March 15th 44 BC, in Rome.

Gaius Julius Caesar the most significant figures in Western history was assassinated today, i.e. on March 15th 44 BC, in Rome.

Julius Caesar was born to a noble Roman family who was very influential in the Republic. Though by the time Caesar was born, their fortunes had declined, and they were no longer prominent. It's not much known about Caesar's childhood. Rome was unstable during his teenage years. Moreover, his father's death left him rather unprotected.

Julius Caesar was not only an extraordinary military commander but a cunning political leader. He enlarged the Roman Empire, and his conquests changed the future of Europe. Caesar played an essential role in the collapse of the Roman Republic and the rise of the Imperial system. Caesar overturned the Roman world. Caesar's actions annoyed Romans that included men whom he considered friends. On the Ides of March, Caesar was assassinated by these men.

A fierce civil war between Marius and Sulla forced Caesar to take sides. Caesar stayed with Marius, but when the war went in favour of Sulla. To avoid execution Caesar was forced to flee Rome and joined the army. He quickly rose through ranks of the military and distinguished himself. Upon the death of Sulla, he returned to Rome and became one of the leaders of the popular party in Rome.

By 60 BCE, Julius Caesar was around 40 years old, and he's already a significant figure in the Republic. Caesar formed a triumvirate with two other powerful figures in Rome with Crassus and Pompey. Crassus, who was the richest man in Rome at that time and Pompey was a significant military figure, a general, in the Roman Republic.

With the help of this arrangement, Caesar was able to secure election as consul and to become the commander of several Roman legions.

The First Triumvirate broke down, after the death of Crassus. The Senate and Pompey saw an opportunity to oust Caesar from power and threatened him with criminal prosecution. To secure his position Caesar advanced on Rome and began a civil war between him and the Roman senate. Pompey the Great defended Rome alongside the Senate. Caesar defeated his enemies at Pharsalus (Greece), but this did not stop the war. Rome and Italy were ruled by Mark Anthony in Caesar's name.

By 44 BC after his decisive victory at the Battle of Mutina, he stood out as the most powerful man in Rome. Initially, he was elected by the Senate as dictator for five years, but later for life. He was granted extraordinary powers along with the army under his control. His position was beyond challenge, but this situation changed on the Ides of March 44 BCE.

The Assassination of Julius Caesar

Why was Caesar assassinated by his own friends?

Caesar was assassinated for three reasons:

1. The conspirators wanted to stop the progress of the growth in his power.

2. They didn't want him to be the king and collapse the Roman Republic.

3. Some of them were motivated by personal revenge.

On the Ides of March (the 15th of March) the gladiatorial games were staged in a hall next to Pompey's Theatre. Caesar was the guest of honour. The conspiracy against Caesar included sixty noblemen, including Caesar's own protégé, Marcus Brutus, who convinced him to attend the games.

The members of the plot called themselves the liberators as they wanted to liberate Rome from Caesar's rule. He refused bodyguards and said he never wanted to live a life surrounded by guards. He had only a few personal attendants who escorted him everywhere.

As soon as Caesar entered the theatre, one of the conspirators approached him. The conspirator pretended to hand a petition to Caesar. At this time he neither had guards nor servants along with him. The group also delayed Mark Anthony, one of Caesar's staunchest allies. Due to which Anthony was unable to be there by Caesar's side. Caesar was left all alone and defenceless.

According to the Greek historian Plutarch one of the conspirators, probably Casca grabbed the toga of Caesar. By his action, Caesar was shocked and surprised. Then the group of conspirators drew knives from their toga and repeatedly stabbed Caesar. It is believed that almost fifty men of the Roman senatorial order attacked him.

It was later known that Caesar was stabbed over thirty times and that he died from blood loss. There is a disputed by historical sources, some sources claimed that Caesar's last words were 'Et Tu Bruti', which means you too Brutus. Brutus's betrayal would have been shocking because Caesar treated Brutus as a son. Several sources also mention that Caesar died at the foot of a statue of his hated opponent and enemy - Pompey.