Decoding Sundarakanda, in an amazing way 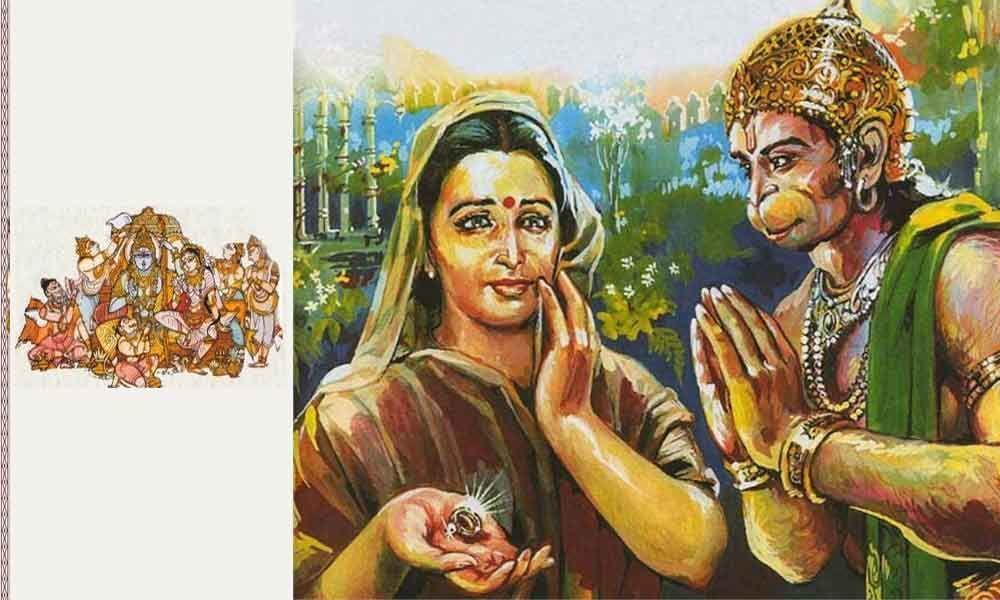 Besides a largely attended audience, the programme was watched by many through Facebook and YouTube. The spiritual fragrances blossomed on all the three days in the packed conference hall of Ravindra Bharathi.

During the three days discourses programme, on the first day, up to darshan of Goddess Sita and on the second day till Sita's giving her sacred ornament Chudamani to Hanumanth were covered spreading over 38 Sargas-parts. The remaining 30 Sargas-parts were covered on the last day.

On the first day, to begin with, Ramanujadasu gave a brief about Sundarakanda and Andhra Valmiki Ramayana author Vavilikolanu Subbarao alias Vasudasa Swamy with specific reference to his life and contribution to literature.

The great saint, literary laurate and scholar late Vavilikolanu Subbarao translated the Sanskrit version of Valmiki 'as its is' in to grammatical Telugu, initially, without any supporting prose, with 24,000 poems equalling with 24,000 Sanskrit Shlokas. He rendered a true translation, verse by verse of Sanskrit Ramayana.

Later he worked for another 10 years, day and night, and supplemented his translation with an elaborate multi-volume commentary.

This though written almost 125 years ago is still popular among literary enthusiasts. Literally these mandaram books in seven parts, Bala, Ayodhya, Aranya, Kishkindha, Sundara, Yuddha and Uttara Kandas, each almost nearly 700 pages, are encyclopaedic in nature. Mandaram has become an important literary magnum opus in the history of Telugu literature.

Vavilikolanu Subbarao was born on January 23, 1863 at Jammalamadugu of Kadapa district in Andhra Pradesh. He joined the Revenue Department as a Revenue Inspector and later got promotion as acting Tehsildar during 1883 to 1900.

In 1904 he joined Madras Presidency College as Lecturer or Pandit in Telugu for teaching Telugu literature. Vavilikolanu Subba Rao has commenced translating the Valmiki Ramayana in 1902 and completed it by 1908.

He dedicated his translation of Valmiki Ramayana to Lord Rama of Vontimitta temple. Subba Rao breathed his last on August 1, 1936.

After a brief introduction to Vasudasa Swamy the actual discourse began. Sundara Kanda is beautiful rendering of Valmiki in Sanskrit and Andhra Valmiki in Telugu.

Its full of narrations and particularly the beauty in all aspects. There is nothing that cannot be said as beautiful in Sundara Kanda.

In Sundara Kanda Hanuman the hero of the Kanda is a Mahayogi. A high intellectual. A great professor.

He carried with him the gold ring given by Lord Rama while going to Lanka and Chudamani given by Goddess Sita while returning from Lanka. This depicts the commitment of Hanuman to God. The entire story of Sundara Kanda happened just in a day and half.

Coming to the story it is just Hanuman crossing the ocean, reaching Lanka, searching for Sita, seeing Sita, conveying to her the news of Rama and Lakshmana, handing over the gold ring given by Rama and taking from her the Chudamani, on his return conveying Sita message to Lord Rama and so on.

This may not require more than 30-40 pages but the Kanda spreads over hundreds of pages because of various narrations in it.

The story begins with Hanuman climbing to the top of Hill Mahendragiri encouraged by Jambavantha.

On the way Hanuman politely rejects the offer of Mainaka to help him and convinces him that in his return journey he will accept it. He won over Surasa and kills Simhika who tried to harm him. He successfully completes his journey in a span of just eight hours and reaches Lanka.

On his reaching Lanka Hanuman faced a tiff with Lankhini, the guard of the city, leading to a fight in which Hanuman won. In the form of small cat (Hanuman knows the art of converting himself into any size and form) he enters Lanka city and searches everywhere for Sita.

He mistook at one point of time Mandodari as Sita but later decided that she was not Sita. His search became fruitful and he could find her in Ashok Garden. To reconfirm that it was Sita he cross checks and verifies with different evidences. While he was on top of the tree, he saw Rakshasa King Ravana coming there and tease and harass Sita.

To make his presence felt, Hanuman recites the particulars of Rama and speaks loudly in praise of him. He gets down, introduces himself to Sita, identifies as envoy from Rama and both exchanges pleasantries.

Sita also in a bid to reconfirm that Hanuman was a real envoy of Rama asks him to tell about Rama and finally believes that he was Rama's envoy. Sita rejects politely Hanuman offer to take her back to Rama on his back. He takes leave of her after taking Chudamani from her.

Later, instead of returning, Hanuman provokes fight with Rakshasas and in the process kills many of Ravana's important army heads including one of his sons. Finally, he voluntarily surrenders to one of the sacred weapons of Indrajit, another son of Ravana.

He was taken captive to Ravana where Hanuman narrates the reason for his coming to Lanka and warns Ravana of dire sequences if he does not hand over Sita. Hanuman was punished by way of burning his tail. Hanuman makes use of the opportunity and turns entire Lanka into flames.

Later he revisits Sita and bids good-bye and returns to Mahindra Hill. Hanuman narrates details of his Lanka visit and reaches Kishkindha. Then Hanuman passes on the message of Sita to Rama.

With all these details the three discourses were over.