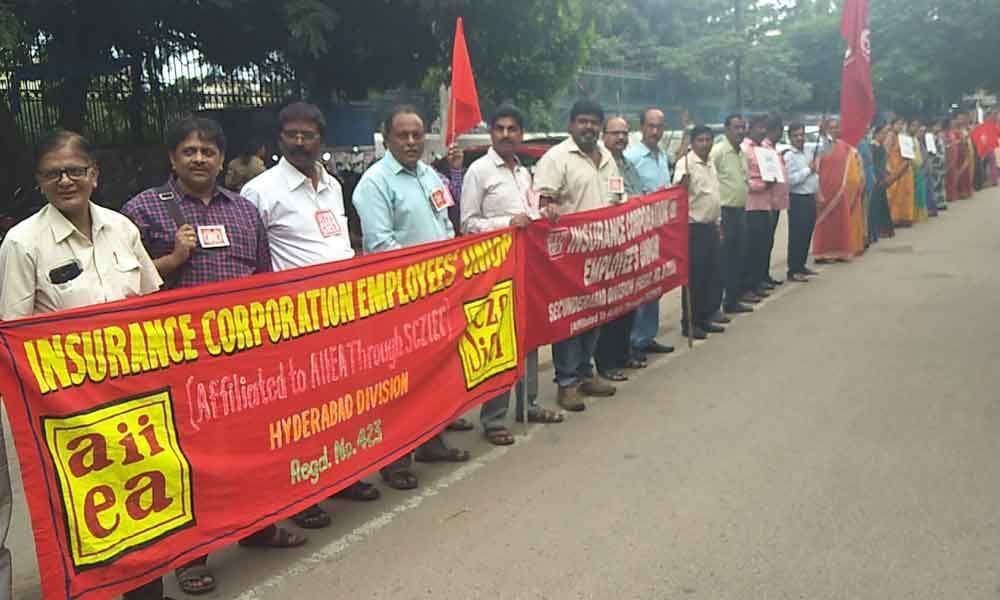 National leader of All India Insurance Employees’ Association BS Ravi has urged the Centre not to go ahead with its plans to allow FDI in insurance...

Dharna Chowk: National leader of All India Insurance Employees' Association BS Ravi has urged the Centre not to go ahead with its plans to allow FDI in insurance sector and hand over public sector insurance companies to private persons.

BS Ravi was speaking at the protest organised by All India Insurance Employees' Association to express their opposition to the Centre's proposal to privatise Life Insurance Corporation (LIC). Protestors formed human chain and raised slogans against the central government's proposed move.

Speaking to media during the protest, BS Ravi said that the central government has been trying to privatize all the public sector companies, and as part of its plan, it is trying to privatize LIC, which has large assets of Rs 7 lakh crore. He said that LIC has achieved tremendous growth in the last 63 years of its existence and has been providing its services to about 42-crore policy holders.

The government has merged the national banks to favour corporate forces, he said. Similarly, efforts are being made to cause damage to LIC, he alleged. He said employees have been staging protests to make people aware of the wrong policies of the government that would result in immense loss to public, apart from loss of employment.

Ravi said that LIC, a corruption-free organisation, has always helped governments in the hour of need, but the government has been trying to destroy it. He said employees of LIC would oppose the move tooth and nail and would be ready for any sacrifices. Union leaders Clement, GS Das, Secunderabad division union president DS Raghu, Rajesh Singh, Tirupathaiah, Adi Reddy and others participated in the protest.