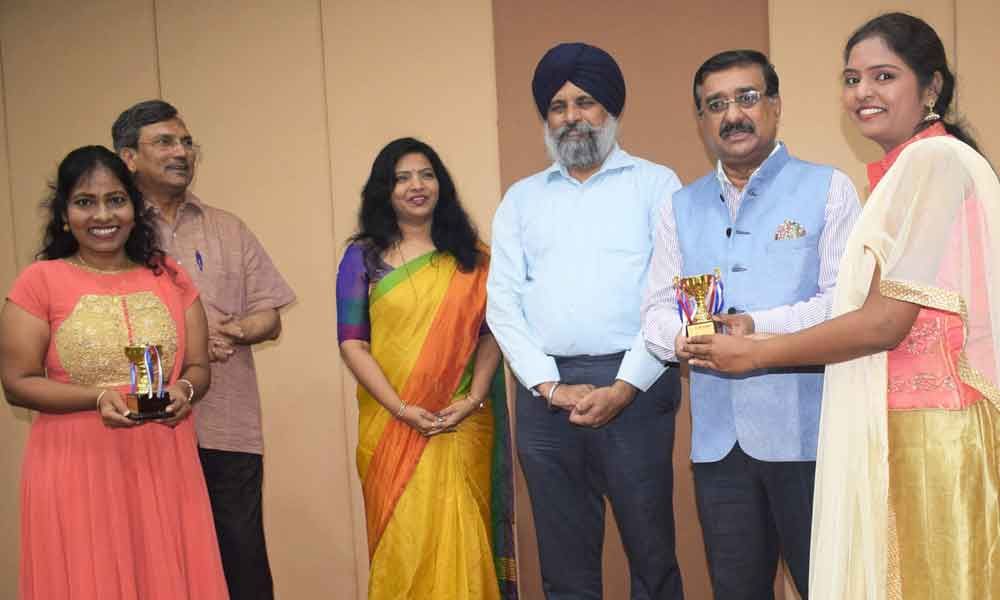 Jubilee Hills: Group-1 Officers of Telangana State, attending the 2nd Foundation Course, being conducted by Dr MCR HRD Institute, presented a feature-rich, cultural programme called, 'Kala Tharangini – A Cultural Extravaganza.' The objective of the event was not only to entertain the audience but also learn issues relating to inter-personal relations, leadership, team work, etc. during the course of planning and execution of the cultural programme.

B P Acharya, Special Chief Secretary and DG of Dr MCR HRDI, opined that the quality of leadership is key to the success of entire administrative hierarchy. He advised the probationers to contribute their optimum best to achieving the dream of 'Bangaru Telangana.' On the occasion, he gave away prizes to winners in such sports like volleyball, badminton, caroms, lawn tennis, chess, mini marathon and book review.

The program commenced with a devotional song rendered by Anitha, which was dedicated to Lord Ganapathi. Rajeshwari, Santosh, Kalpana, and Pallavi presented a series of solo dances, which were followed by an array of group dances. Both the solo and the group dance performances received huge rounds of applause. The dazzling display of colourful costumes of the officers captured the hearts of one and all.

Two songs, 'Mounamgane Edagamani' and 'Gunna Mamidi Komma Mida,' rendered by Anitha and Rajeshwari respectively, not only lifted the mood of audience but also filled the ambience with soulful music. One of the highlights of the event was a skit, 'Arupu – Voice of Women in 21st Century,' presented by Pallavi and her group, which had an inspiring social message and won huge admiration from the audience. Shankar also performed a skit. The lively anchoring by Madhuri and Ramu raised the entertainment quotient of the evening.

The event was organized by Sports & Cultural Club with N Uday Reddy as its Secretary and Manikantesh, Bharat Reddy, Naveen Kumar, Ramakrishna and.Pallavi serving as its members. Dr S M Nabi, the Course Director, and Dr Ravalapati Madhavi, the Course Coordinator, and other dignitaries graced the programme.