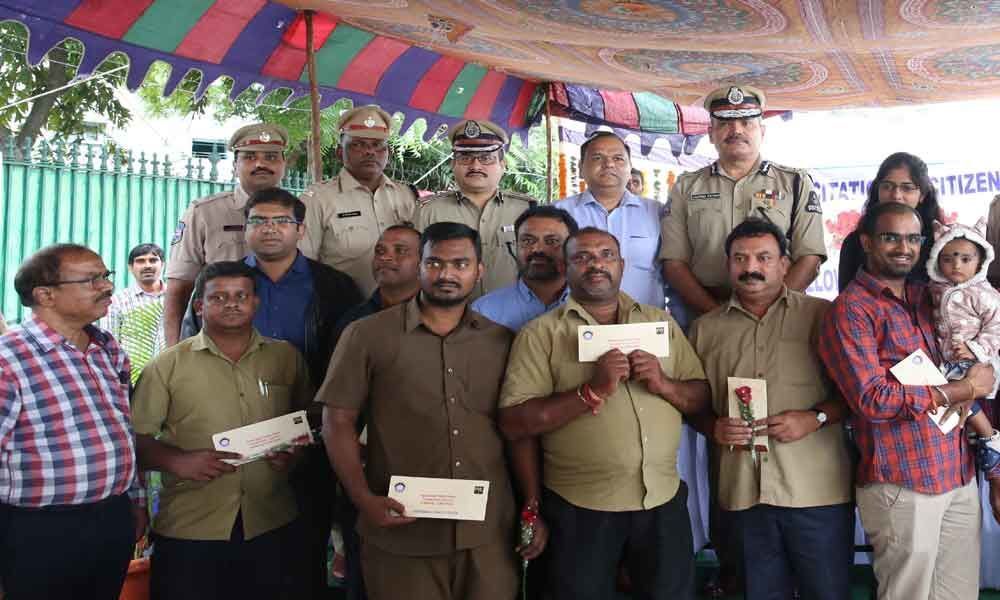 The city traffic police in order to bring road safety awareness among the citizens and make city roads safe and accident-free joined hands with PVR Cinemas to give gift coupons to those following traffic rules.

Hyderabad: The city traffic police in order to bring road safety awareness among the citizens and make city roads safe and accident-free joined hands with PVR Cinemas to give gift coupons to those following traffic rules.

Anjani Kumar, the Commissioner of police, felicitated 50 citizens who have been following traffic rules and riding their vehicles without a single traffic violation in the last 10 – 15 years. They were presented with complimentary gift coupons of PVR Cinemas on Tuesday at Police Control Room, Nampally.

Anjani Kumar said that for the past 4-5 years Hyderabad had become an international business destination. Even with years of driving experience, one can land in trouble as even a second distraction can cause road accidents. Driving without following traffic rules is a huge crime, which can cause death.

When one follows basic traffic rules, it inspires others too to follow the traffic rules. A bike rider must wear a helmet not just to avoid penalty, but for their safety. Traffic rules cannot be seen from enforcement point of view, but it should be seen as self-safety audit, he said.

The CP also urged media to become a partner in taking these awareness programmes to all the citizens to make Hyderabad an accident-free city. Anil Kumar, Additional Commissioner of Police, said that to encourage and motivate all road users to follow road rules and regulations the PVR Cinemas came forward to sponsor 200 free gift coupons to 200 good drivers every month and this will be continued up to six months.

The validity of each PVR Cinema coupon is up to October 15. During the programme, vehicles were checked randomly on the road near PCR complex and drivers record was checked online and those with no challan history were rewarded by the Commissioner. L S Chowhan, DCP Traffic-I, K Babu Rao, DCP Traffic-II, and Inspectors of Hyderabad Traffic Police and Citizens, participated in the programme.