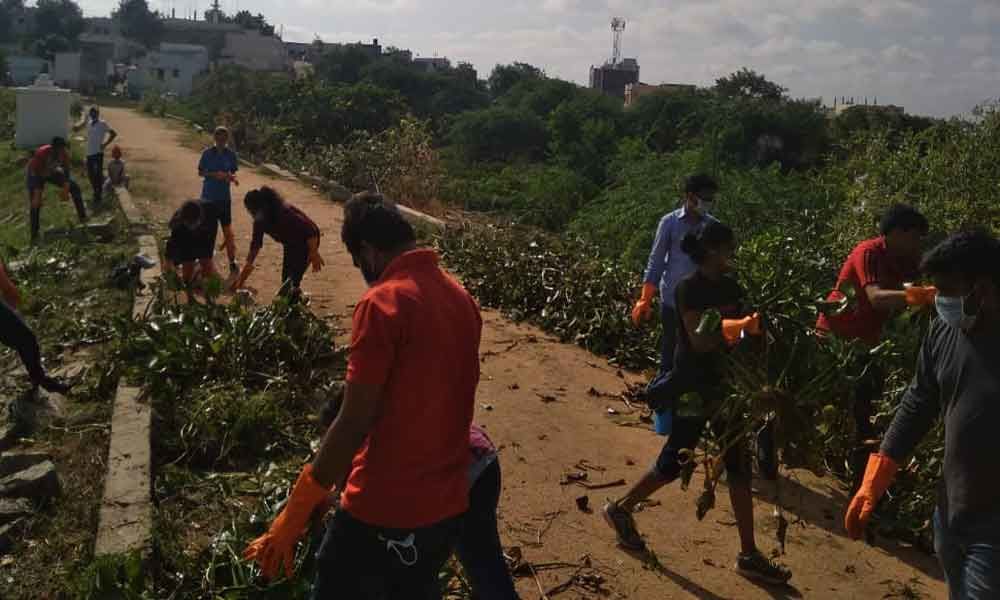 Raa Cheruvu aka Rama Cheruvu in Ambedkar Nagar Boudppal has reduced to an open drain.

Boduppal: Raa Cheruvu aka Rama Cheruvu in Ambedkar Nagar Boudppal has reduced to an open drain. Once what was a drinking water facility for the locals around the lake is currently in a bad shape with water hyacinth and sewerage and chemical water being let into the lake by the companies and localities around Mallapur/Nacharam.

With the help of an NGO 'Helping Hands Humanity,' a few concerned citizens have taken it upon themselves to clean up the lake every Sunday and they are also creating awareness among the local community to save the lake. They are campaigning against throwing garbage in the water body and often try to prevent anyone from impairing the condition of the lake.

The locals allege that there are many illegal activities happening around the lake. They see some persons selling ganja and consuming alcohol on the bund of the lake. They took it to the notice of the local police about such anti-social activities. The police on their part assured the locals to send regular patrolling and assured prompt action against the offenders.

Ramesh, a local resident, said, "A decade ago Raa Cheruvu was a beautiful lake where the locals used to do fishing and also the lake was used for drinking water but after the chemical water started flowing into the lake and the fishes started dying. We would like the different departments to get involved and take positive steps to save the lake.

The TS govt is also keen on saving lake but we want to see action on the ground and not just on paper. People are found drinking alcohol and doing drugs around the lake bund. The police are also co-operating and sending regular patrol vehicles to the lake. We are trying to get the lake back to its original glory like it was a decade back."

The officials from the irrigation department say that the tank comes under Mission Kakatiya Phase 2. Their major task is to divert effluents coming from the chemical industries in the upper regions of the tank. Excavating a diversion canal was stopped and the irrigation department is trying to explore other alternatives, taking into consideration public safety and other issues.

Once the officials took up excavation of the diversion canal to divert sewerage water, but they were concerned over probable failure of a building constructed very near to the tank and also about the silt getting mixed with chemical residues which got deposited for two to three meters.

The locals request the government to save the lake from being drainage and chemical water dump and make sure the lake is protected from illegal activities and turned into a freshwater lake once again.