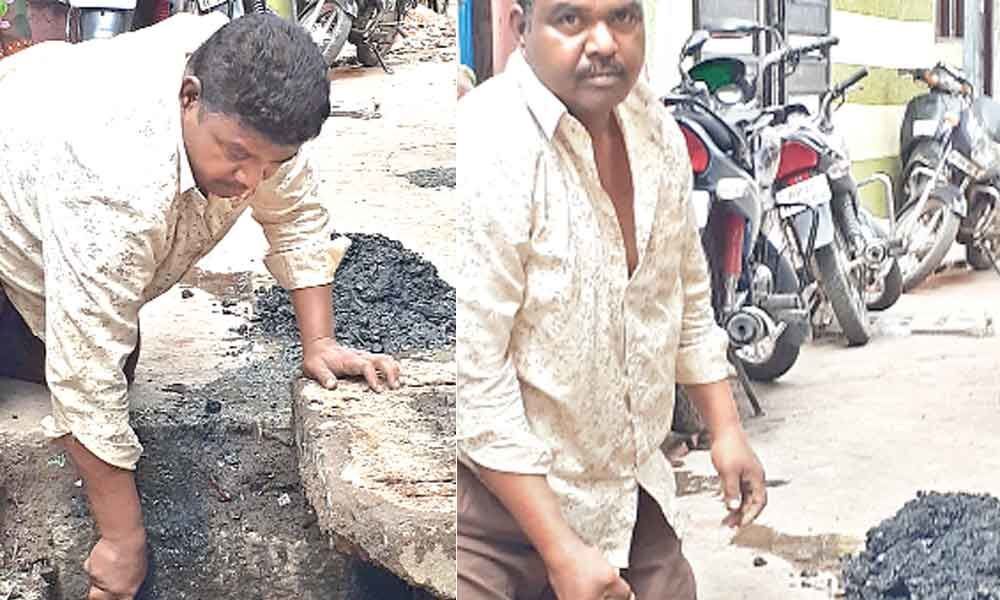 Even as the GHMC is busy generating awareness on 'Saaf Hyderabad, Shaandar Hyderabad' campaign, the Old City residents are seen manually cleaning the sewerage manholes.

Yakutpura: Even as the GHMC is busy generating awareness on 'Saaf Hyderabad, Shaandar Hyderabad' campaign, the Old City residents are seen manually cleaning the sewerage manholes. After failing to get any response from the civic bodies, the residents who fear for the health of their loved ones have decided to clean up the choking points with their own hands.

The parents say they were forced to this as they feared that their children may attract diseases and seasonal fevers, as the GHMC authorities were not responding pleas over overflowing sewage. "Civic bodies are busy generating awareness to keep city clean, but when residents complain about their problems, they fail to perform their duties. As no one turned up to clean, desperate residents have started cleaning up manholes near their houses at Chandanagar area of Yakutpura," said Abdul Rahman, a social activist.

According to Abdul Rahman, Yakub (name changed), a resident of Chandanagar, was seen cleaning the manhole himself due to indifferent attitude of civic authorities to the pleas to curb sewerage overflow in their area. He said that for the last two days, he had been lodging complaints about the sewerage problem, but they had not been heeded. As a desperate measure, he himself started cleaning the manhole."

Due to a choking problem, the sewerage water stagnating and turning into a breeding ground for all kinds of insects and mosquitoes, besides emanating bad smell. As the children would be prone to diseases, the worried parents decided to fend for themselves.

Rahman said the city was witnessing increase in viral fevers and also some deaths were reported, hence there was a kind of anxiety amongst the residents. Rahman said keeping this in mind, a in fit of rage, Yakub opened the manhole cap and removed the waste from the manhole himself. He later threw the wastage in a garbage. Same is the plight of people vexed by the failure of the administration to ensure sanitation.

"The campaign of 'Saaf Hyderabad, Shaandar Hyderabad' in city and 'Swachh Bharat' at national level are welcome, but not a worker can be seen on ground from GHMC and HMWSSB," crticised Abdul Rahman.

Mohammed Mujeeb, another resident, said that a resident who was unable to get the sewerage cleaned up by the civic authorities started cleaning it up himself. "If this kind of attitude continues, even others may have to clean the manholes close to their houses. At least now the authorities must respond and never fail in their duties," he added.