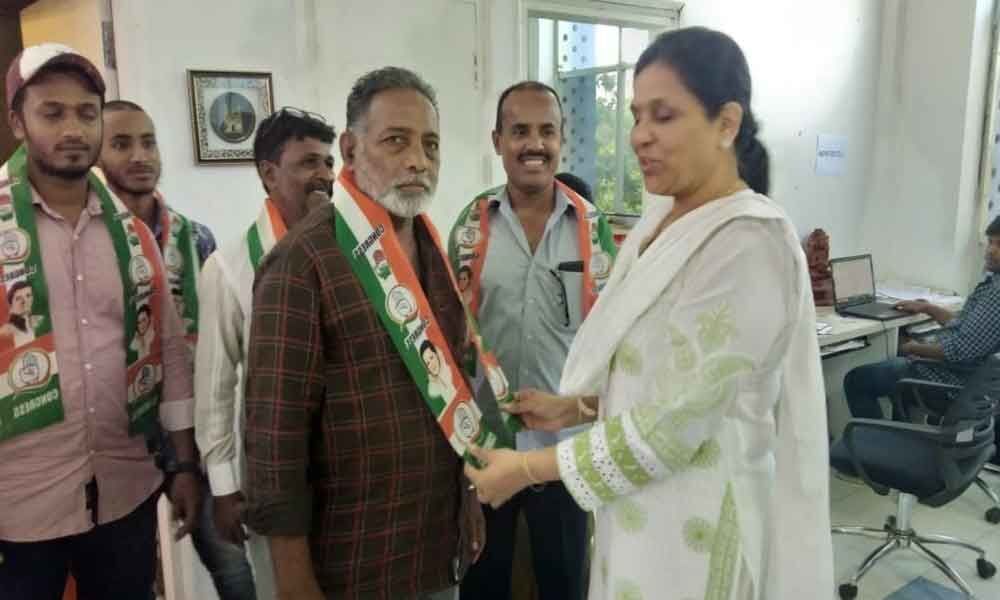 Following brewing of discontent amongst TRS cadre in some areas of Rajendranagar especially of Shastripuram and Sulaiman Nagar, some of them have started to shift their loyalties to Congress party.

Rajendranagar: Following brewing of discontent amongst TRS cadre in some areas of Rajendranagar especially of Shastripuram and Sulaiman Nagar, some of them have started to shift their loyalties to Congress party.

It was no secret that both TRS and MIM started to carry out campaigning together to ensure the victory of the TRS candidate, but due to lack of coordination between the cadre of two parties no combined discussions of meetings were held so far.

These courtesy meetings were supposed to bring them closer and make an atmosphere wherein they can came to an understanding and work together to ensure the party's victory. However, no such meeting has been organised yet anywhere in the Rajendranagar while there is merely two days left for the scheduled polling day. With those who were disenchanted started joining Congress and also started campaigning for the same in their areas.

"We were belittled when the party leadership and decided to rope in MIM for the campaigning in Rajendranagar. Especially in Shastripuram and Sulaiman Nagar our political base since the day one. We have been working for the party while facing hardships like persecution from MIM itself, but have stood with the party undaunted," said Mohammed Farooq Khan, a TRS leader of Shastripuram who have left the party and join the Congress recently along with other leaders.

Unlike other areas the minority dominated areas like Shastripuram and Sulaimannagar under Rajendranagar constituency carries almost 20 to 22 thousand votes which are divided equally into TRS, Congress and MIM.

"How could the TRS party, against whom the MIM leaders had made serious allegations during the recently held general elections, become darling overnight for MIM? During the Assembly polls hustling the MIM President Asaduddin Owaisi while addressing a public meeting has bragged that 'TRS car would not be allowed in Ragendranagar constituency, they must have to returned back by roaming around PVNR flyover.' Today, the same MIM president is campaigning for the car symbol just to keep his political presence alive in Rajendranagar from where his party was received a severe blow in the general elections," said Omer Bin Awad of Shastripuram Division who joined Congress.

"The leaders of Rajendranagar were disquieted with the recent events due to neglected by the leadership. Though the senior leaders have assured us that this would go no longer than the election and everything would come down to normalcy after the hustling, we still try to find a better way out against the apathetic attitude towards us in the party," said Mohammed Zaheeruddin, a TRS party leader of Sulaiman Nagar who had shifted loyalty to Congress.