Yet another case of assault on doctor 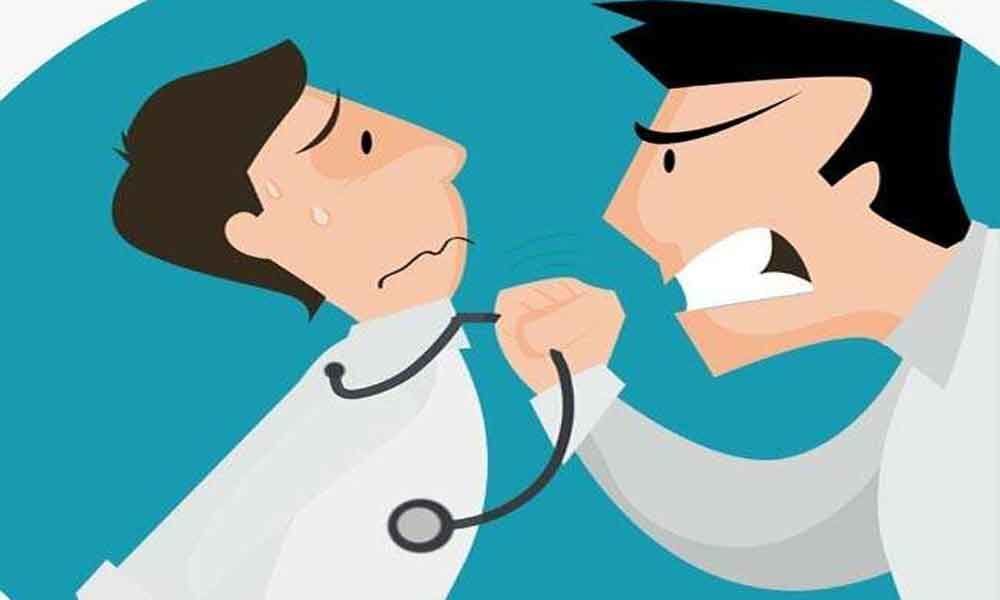 Call it a free for all, if you like. In what can be termed an apparent nonchalance, Nasreen, an attendant, twisted the hand of a female PG, Dr Pratusha, and started using abusive language in the presence of security personnel and others on Monday night at Niloufer Hospital.

Hyderabad: Call it a free for all, if you like. In what can be termed an apparent nonchalance, Nasreen, an attendant, twisted the hand of a female PG, Dr Pratusha, and started using abusive language in the presence of security personnel and others on Monday night at Niloufer Hospital.

The medical staff said that Dr Pratusha removed a bag of the attendant Nasreen, which prompted the latter to shower expletives and turn physical. Dr Vishnu, president of Niloufer Hospital chapter of Telangana Junior Doctors Association (JUDA), said, "The security at the hospital is just on paper. This is the second time this year that a doctor has been attacked. There is so much workload. The nurses are few and there is no support."

Harried doctors are coping with a deluge of patients as the outpatients have touched 700 per day and there are 100-150 admissions in a day. "We want the government to provide security in all hospitals and beef it up," said Dr Prasanna Kumar. Doctors say that a doctor was attacked earlier this year when a person went past three security checkpoints to reach the emergency ward.

Meanwhile, the junior doctors went on strike and all elective medical services came to a grinding halt on Tuesday. Junior doctors demand that security be strengthened and more power be given to the Telangana State Police Special Protection Force (SPF).

Nasreen and her brother Adil were taken into custody on Tuesday at 8 am on Tuesday. Speaking to The Hans India, Sub Inspector, Nampally Police Station, Penta Goud said, "A case has been registered and a detailed investigation is underway." It may be noted that six months ago, a male PG Dr Rahul was attacked and his case is coming up for hearing soon.

All government hospitals face staff crunch and are forced to attend to most critical patients first at the cost of others. There is a severe staff crunch in Niloufer Hospital as well. A doctor said, "We have hardly any healthcare workers and there is a perennial shortage of beds. The outpatients are growing by the day and due to the lack of a support system, patients vent their anger on doctors."