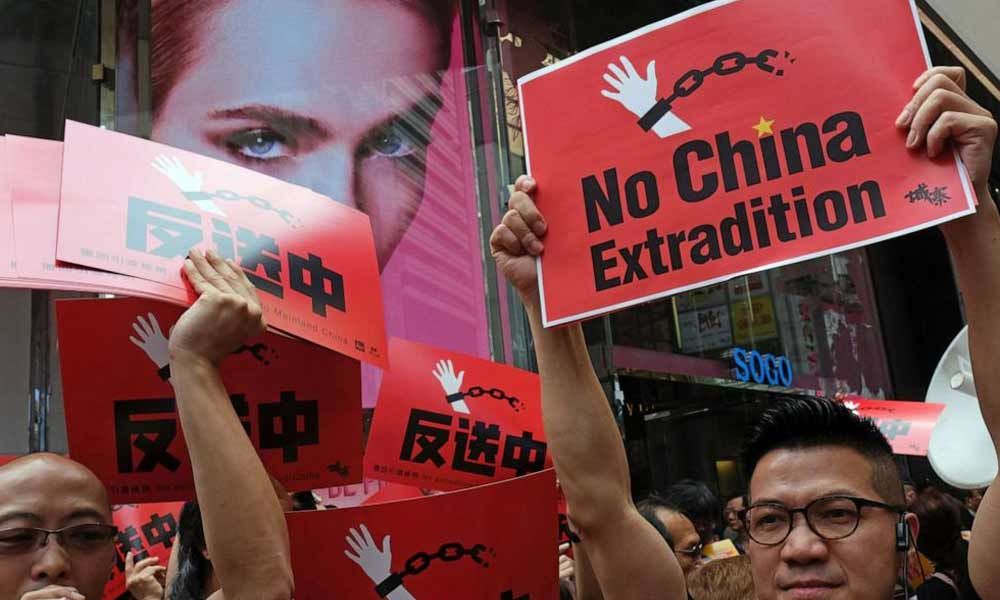 China on Saturday said it supports the Hong Kong leader's decision to suspend a controversial bill that would allow extraditions to China, following massive protests.

Beijing: China on Saturday said it supports the Hong Kong leader's decision to suspend a controversial bill that would allow extraditions to China, following massive protests. About an hour after Hong Kong Chief Executive of Carrie Lam announced the suspension of the Fugitive Offenders and Mutual Legal Assistance in Criminal Matters Legislation (Amendment) Bill 2019, following sustained protests from lakhs of people an official statement here expressed China's backing for Lam and her decision to back down.

"The Chinese Central Government expresses its support, respect and understanding for the SAR government's decision and will continue its staunch support for Chief Executive Carrie Lam and the SAR government in governing Hong Kong in accordance with law and upholding the SAR's prosperity and stability with people from all sectors," Geng said. He said China continued to respect and faithfully implementing the "one country, two systems" policy under which Hong Kong was return from British rule to China in 1997. The former British colony is being governed a high degree of autonomy and the rights and freedoms of Hong Kong residents have been fully guaranteed according to law, he said.

"The facts are there for all to see. Maintaining Hong Kong's prosperity and stability serves not only China's interests, but also the interests of all countries across the world," he said. "I would like to emphasise that Hong Kong is China's SAR and its affairs are purely China's internal affairs that brook no interference from any country, organisation or individual. China's determination to safeguard its sovereignty, security and development interests and uphold Hong Kong's prosperity and stability is rock solid," he said.

Lam, who had previously refused to scrap the bill despite mass protests since June 9, told a press conference in Hong Kong on Saturday that "I feel deep sorrow and regret that deficiencies in our work – and various other factors – have stirred up substantial controversies". Protesters expressed concern at increased Chinese influence. Lam said she had heard the calls for her government to "pause and think", BBC reported. She also admitted that the "explanation and communication" of the bill had not been adequate. She said her goal was "the greatest interests of Hong Kong", which involved first restoring peace and order. The government had argued the proposed extradition bill would "plug the loopholes" so that the city would not be a safe haven for criminals, following a murder case in Taiwan.

Lam said that the urgency felt to pass the bill before the legislative year ends "perhaps no longer exists". No date has been set for "the next step forward", she said. For the pro-democracy activists, who have been opposing China's increasing grip over Hong Kong, this is regarded as their first success. In 2014, thousands of pro-democracy activists occupied central Hong Kong district lasting 75 days protesting against China vetting contests for the local legislature petered out. China's handling of the protests in Hong Kong drew sharp criticism from the US and the European Union.