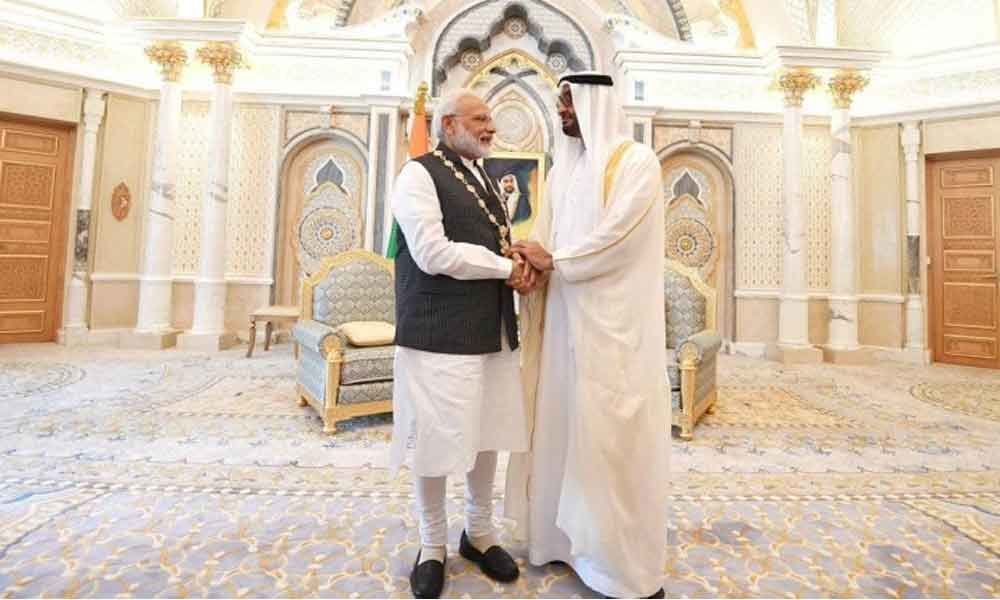 Prime Minister Narendra Modi has received the United Arab Emirates' (UAE) highest civilian honour, a move that has sparked outrage among rights activists over his government's clampdown on Kashmir.

Modi was awarded the 'Order of Zayed' medal by UAE's crown prince Sheikh Mohammed bin Zayed Al Nahyan, known by his initials MBZ, during a visit to the capital Abu Dhabi on Saturday, reinforcing ties between the two countries.

MBZ personally put the gold medal around Modi's neck, with a portrait of Sheikh Zayed bin Sultan Al Nahyan, the UAE's first president after whom the order is named, displayed behind them. The two men shook and held hands for a moment and spoke quietly.

"You deserve it," MBZ told the Prime Minister at one point while posing for photos. Modi had been announced as a recipient of the prize in April, days before winning re-election, in a tweet from MBZ.

"We have historical and comprehensive strategic ties with India, reinforced by the pivotal role of my dear friend, Prime Minister Narendra Modi, who gave these relations a big boost," said a tweet from his account.

But the award came as Modi's government maintains tight security restrictions in Kashmir after stripping the region of its special autonomy. Modi's decision has drawn a largely muted response from Gulf Arab nations.

The UAE's ambassador to India, in particular, referred to Kashmir as an internal issue for India. Modi is due to travel to Bahrain later, becoming the first Indian Prime Minister to visit the island nation.