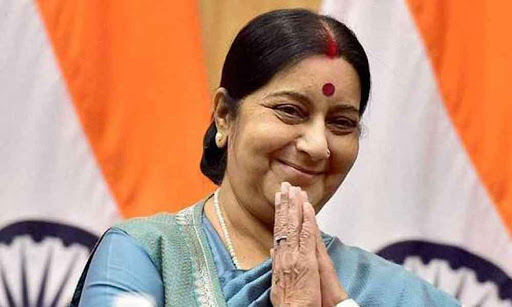 Sushma Swaraj, who today stands as the best External Affairs Minister till date, and one of the best cabinet Minister in Modi-led NDA government....

Sushma Swaraj, who today stands as the best External Affairs Minister till date, and one of the best cabinet Minister in Modi-led NDA government. Famous for being one of the most helpful, tech-savvy ministers of India, she has restored our faith in bureaucracy and has received applause from all around the world.

Here are lesser-known facts about Sushma Swaraj that you probably didn't know:

2. From Sushma Sharma to Sushma Swaraj

Sushma Swaraj was Sushma Sharma before her marriage to Swaraj Kaushal

Sushma Swaraj's parents hailed from Dharampura area of Lahore, Pakistan. She also visited Dharampura during her last visit to Pakistan.

Sushma Swaraj got her early education from Sanatan Dharma College in Ambala Cantonment and got bachelor degree with majors in Sanskrit and Political Science.

Then she studied law at Punjab University, Chandigarh.

She also received the title of the best cadet of N.C.C at the S.D. College, Ambala Cantt for three years in a row.

6. Killing with her speeches since long time

With an interest in classical music, poetry, fine arts and drama too, Sushma Swaraj can be definitely be called an all-rounder!

In early 1970s, she joined Akhil Bhartiya Vidyarthi Parishad (ABVP) and from there began her political journey.

In 1973, Sushma Swaraj started practice as an advocate in the Supreme Court of India. She was part of George Fernandes Legal Defense team in Baroda Dynamite case (1975-77) along with Swaraj Kaushal.

During the times of Emergency, Sushma Swaraj married Swaraj Kaushal on 13, July, 1973.

Swaraj Kaushal who was designated as Senior Advocate by Supreme Court of India at the young age of 34. And has also served as Governor of Mizoram (February 1990 to February 1993).

In 1977, Sushma Swaraj became the youngest cabinet minister, at the age of 25, in the Janata Party Govt., headed by then Chief minister Devi Lal.

12. Of the many firsts to be honored

In 1979, at an young age of 27, Sushma Swaraj became State President of Janata Party, Haryana State.

She is also the first female Spokesperson of a national political party in India. Swaraj has many firsts to her credit as BJPs first female Chief Minister, General Secretary, Leader of Opposition, Union Cabinet Minister, Spokesperson and Minister of External Affairs.

From the underworld to the legal papers, the journey of film production to make it to an industry, again made possible by Sushma Swaraj when she declared Indian film industry, thus making it eligible for bank finance.

Swaraj was Union Cabinet Minister for Information and Broadcasting at that time (1988).

Served as first female Chief Minister of Delhi for a short period in 1998 (13 October – 3 December).

Her popularity among the crowd can be clearly seen when she managed to get 358,000 votes in her favor in just 12 days of her campaign for the Bellary constituency in Karnataka, where she had contested against Sonia Gandhi.

Thou, she lost by a margin of 7%, Swaraj gave a good fight to Sonia Gandhi.

During her tenure as Union Health Minister (January 2003 to May 2004) she opened up 6 All India Institute of Medical Sciences, at Bhopal, Bhubaneswar, Jodhpur, Patna, Raipur and Rishikesh.

A milestone in her ladder of achievements.

17. Honored with the Outstanding Parliamentarian Award in 2004

First and only female MP till date to be honored with the Outstanding Parliamentarian Award.

She has been elected seven times as the member of the parliament, and three times as a Member of the Legislative Assembly.

18. Pushed Congress in formation of Telangana

Sushma Swaraj played a major role in passing Telangana Bill which let to formation of a separate state Telangana. Swaraj also has to argue with her own mentor Senior BJP Leader LK Advani for this.

And once she said: "TELANGANA, WHEN YOU THANK SONIA AMMA FOR THE FORMATION OF TELANGANA STATE, DON'T FORGET YOUR CHINAMMA (SUSHMA SWARAJ REFERRING TO HERSELF)"

19. Second woman to be Minister of External Affairs

The second woman to be India's Minister of External Affairs after Indira Gandhi.

Serving since 26, May, 2014, as Minister of External Affairs under Narendra Modi led NDA government.

Mother to a brilliant daughter, Bansuri Swaraj, an Oxford graduate, and a Barrister at Law, Bansuri has of course followed into the steps of her mother.

Being one of t he most tech-savvy ministers, she is always there to help other in need. Many have got immediate help after they tweeted to Sushma Swaraj.