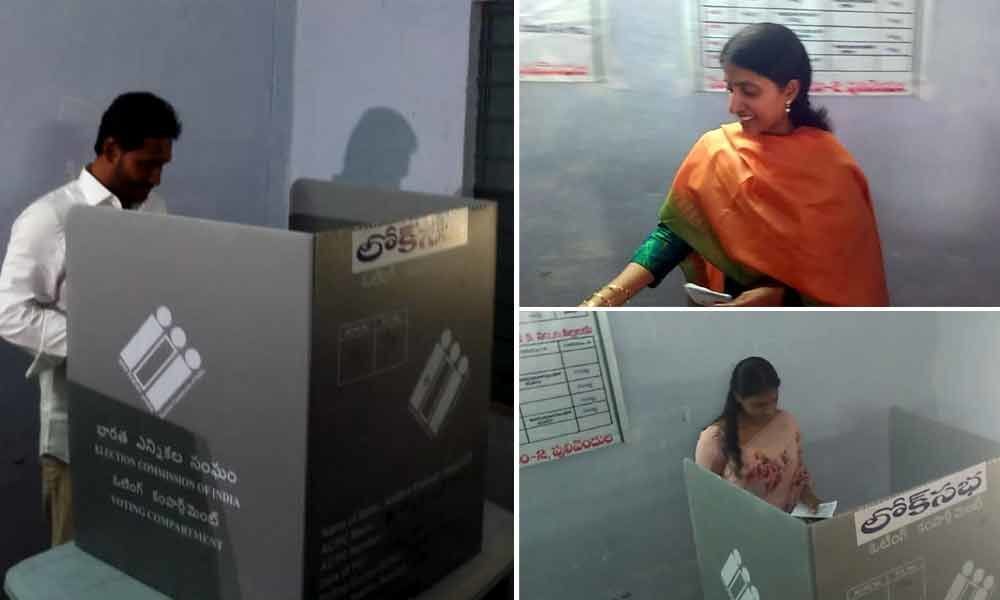 Except some stray incidents election in kadapa distrct was total on Thursday. Despite polling was witnessed slow in the morning between 7:00 AM to 9:00 AM due to defunct of EVMs later it was picked up since 10:00 AM.

Kadapa: Except some stray incidents election in kadapa distrct was total on Thursday. Despite polling was witnessed slow in the morning between 7:00 AM to 9:00 AM due to defunct of EVMs later it was picked up since 10:00 AM.

According to the official sources 63.90% of polling recorded up to 5:00 PM apart from Jammalamadugu segment recorded 72.34 highest poll percentage in the district.

YSR Congress president YS Jagan Mohan Reddy along with his family members YS Vijayamma,YS Bharathi, Sharmila have exercise their franchise in Bakarapuram polling booth no 134 around 8.00 AM in Pulivendula town.

Meanwhile voters especially old aged people who left the polling centers without utilizing their voting right due to defunct of EVMs, thronged back to the polling centers after call given by TDP National President N Chandrababu Naidu as voters were seen standing in line in big numbers.

In Jandavarm village of Mydukuru mandal TDP functionaries allegedly manhandled YSRCP booth agent Muthyala Yellareddy and destroyed his lemon garden following he sit booth agent for YSR Congress. They also destroyed two EVMs in the polling booth reasoned polling was detained for one hour. CRPF personnels rushed to the spot from Mydukuru and restored normalcy by dispersing the mob.

In Meerjakhan village of Duvvuru mandal 3 TDP functionaries including women badly injured after YCP activists attacked the houses of TDP men in the village.

In Badvel town police arrested 3 persons when they tried to captured the booth for rigging votes.

When contacted by Hans India SP Abhishek Mohanty said polling in kadapa district went on peaceful as the public exercised their franchise free and fair manner.

District election officer CH Harikiran said voters who were in the line as per schedule time must have opportunity to cast their votes.