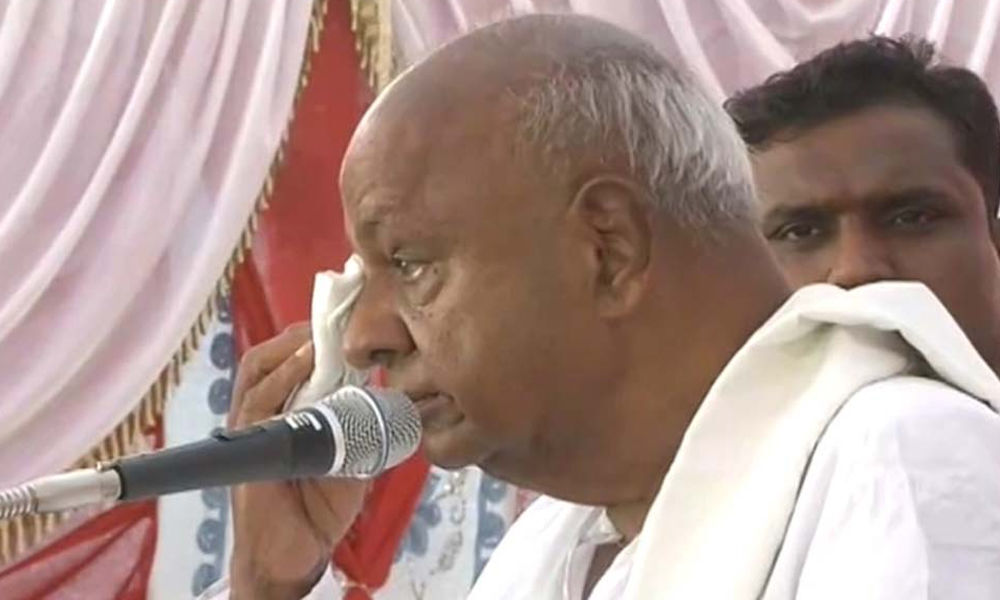 BENGALURU: Janata Dal (Secular) chief HD Deve Gowda Wednesday broke down and said he was pained by allegations of dynasty politics against him. The fo...

BENGALURU: Janata Dal (Secular) chief HD Deve Gowda Wednesday broke down and said he was pained by allegations of dynasty politics against him.

The former prime minister's emotional response was to growing criticism of his family's alleged nepotism with JD(S) fielding both his grandsons Nikil Kumaraswamy and Prajwal Revanna from party bastions of Mandya and Hassan respectively for the Lok Sabha polls.

"...so many allegations, from morning in the media (they talk about) Deve Gowda, Revanna, Kumaraswamy and their sons," Mr Gowda said as he broke down at an event in Hassan to launch the poll campaign of Prajwal Revanna.

Seeing Mr Gowda wiping tears and speaking in a heavy voice, JD(S) supporters gathered at the event requested him to calm down.

BJP has hit out at Deve Gowda, calling the episode a "drama".

The event also witnessed both Prajwal and his father HD Revanna too getting emotional.

Prajwal broke down as Mr Gowda declared him as the candidate and HD Revanna while MLA Balakrishna was speaking about Mr Gowda not contesting from Hassan this time.

Later speaking to reporters, Mr Gowda said, he was pained by controversy in Mandya against his other grandson and chief minister H D Kumaraswamy's son Nikhil's candidature.

He said, "It was the decision of JD(S) leaders to field Nikil from Mandya. I had not announced.I''m deeply pained, they are saying Nikhil Go Back..."

"...I will go to Mandya... let them shout go back... for whom I fought in last 60 years, I will place everything before the people of Mandya," he added.

Opposition is simmering against Nikhil's candidature in Mandya, and many who claim to be JD(S) supporters have hit out at the party leadership for sidelining loyal party workers to favour someone from their family despite not being actively involved in party activities.

A social media campaign titled "Go back Nikhil" had gained momentum in Mandya a couple of days ago to oppose the "dynasty politics" of the Deve Gowda family.

BJP said: "First Drama for the 2019 elections begins now," as it tweeted videos of Mr Gowda and family getting emotional at the Hassan event.

"If "CRYING" was an art Sri. @H_D_Devegowda & his family would hold the record for mastering the "Art Of Crying"to constantly fool people for decades. Matter of the fact is Before elections Deve Gowda & his family cries.

After elections people who vote this family cries," it said in another tweet.

If "CRYING" was an art Sri. @H_D_Devegowda & his family would hold the record for mastering the "Art Of Crying" to constantly fool people for decades.

Matter of the fact is

After elections people who vote this family cries. pic.twitter.com/7J8RcqYUO3

"Emotions are my weakness. It is in my blood. It is very difficult to control," Mr Kumaraswamy had said last month.

With tears trickling down his cheeks, Mr Kumaraswamy had said in July last year that he was not happy being the chief minister and "I have swallowed poison like Lord Vishakantha (Shiva)."