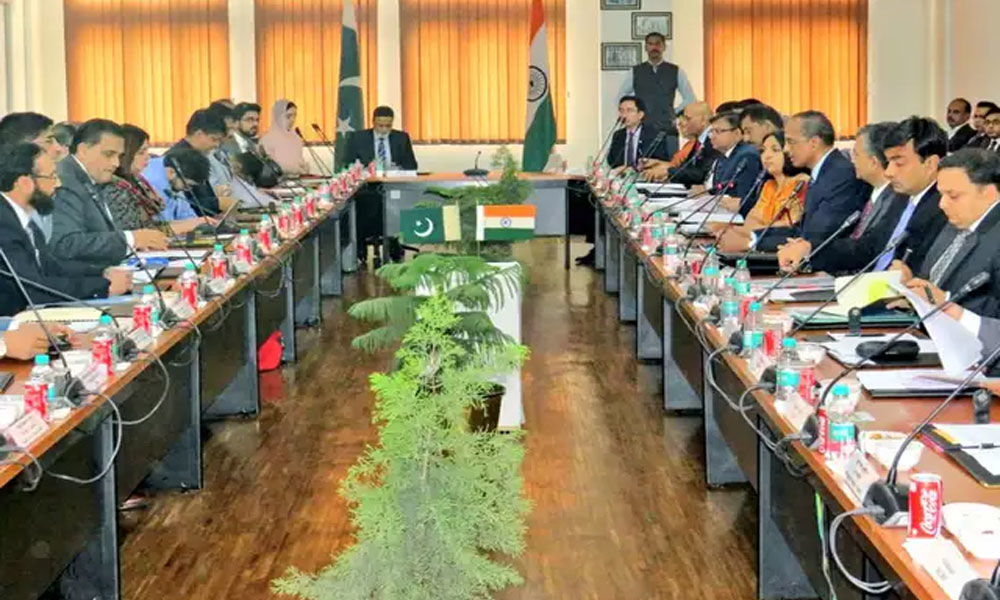 Exactly a month after the Pulwama terror attack killed 40 CRPF troopers, Indian and Pakistani officials met for the first time at Attari border near Amritsar on Thursday to finalise modalities of the corridor to the Kartarpur Sahib gurdwara.

Attari (Punjab):Exactly a month after the Pulwama terror attack killed 40 CRPF troopers, Indian and Pakistani officials met for the first time at Attari border near Amritsar on Thursday to finalise modalities of the corridor to the Kartarpur Sahib gurdwara.

"Commitment to fulfill a dream!" is how Ministry of External Affairs spokesman Raveesh Kumar referred to the crucial dialogue on Twitter, once the meet kicked off.

"Talks begin between India and Pakistan to discuss and finalise the modalities for the Kartarpur Corridor, that will facilitate Indian pilgrims to visit the holy shrine of Gurudwara Darbar Sahib Kartarpur," he added.

The meeting started after the arrival of the Pakistani delegation via the Attari-Wagah joint check post land border.

It is being held at the Integrated Check Post (ICP) at Attari on the Indian side.

Officials of the Ministry of Home Affairs (MHA), Ministry of External Affairs (MEA), National High Authority of India and other related departments represent the Indian side at the talks.

While, Pakistan has sent an 18-member team headed by its Foreign Office's Director-General of South Asia, Muhammad Faisal, who is also the Foreign Office spokesperson.

India has made it clear that the meeting was in no way a resumption of a bilateral dialogue.

"It is not any resumption of bilateral talks, let me make it very clear that it is not in any way a resumption of a bilateral dialogue," the MEA spokesperson said earlier.

The Ministry has said that the issue relates to emotions and sentiments of the Indian citizens of the Sikh faith and its decision regarding the meeting reflects a strong commitment to operationalise the corridor on the occasion of the 550th birth anniversary of Guru Nanak Dev.

Sources said that security aspect was of paramount importance and there will be no dilution in that.

India is wary of the Pakistan establishment's direct and indirect support to pro-Khalistan elements who would like to take advantage by reaching out to pilgrims from India.

They have also said that Pakistan will also be conveyed that places of pilgrimage should not be used for separatist propaganda by anti-India elements.

India is keen for visa-free access to the pilgrims to the historic Sikh shrine across the border.

Officials from both sides were also expected to discuss the alignment of the project as there is some mismatch in the coordinates.

"Continuing with our spirit of constructive engagement and flexibility and in line with our sincere efforts to deescalate the situation for regional peace and stability," Faisal told Pakistani media before leaving for India for the talks.

He said that this was the first in a series of meetings. "We hope this initiative of the Prime Minister (Imran Khan) will not only facilitate Sikhs, especially from India, but will be a step forward in the current direction from conflict to cooperation, animosity to peace and enmity to friendship," he added.

An Indian delegation will visit Islamabad for a follow-up meeting on March 28.

The meeting is taking place a month after a militant of the Pakistan-based Jaish-e-Mohammad terror outfit on February 14 blew up a truck of a Central Reserve Police Force convoy killing 40 troopers, and triggering India-Pakistan tensions.

The Kartarpur Sahib gurdwara in Narowal district of Pakistan's Punjab province, located 4.5 km from the border near the Dera Baba Nanak town in Punjab's Gurdaspur district, is significant for the Sikh community as it is here that Sikhism founder Guru Nanak Dev spent 18 years of his life and is his final resting place.

The governments of India and Pakistan are trying to facilitate the travel of pilgrims to offer prayers at the gurdwara -- a demand made by the Sikhs for the past over 70 years.

The union government has already announced the setting up of a Rs 190-crore state-of-the-art Passenger Terminal Building Complex at Dera Baba Nanak, with its design inspired by the symbol "Khand", which symbolises values of oneness and humanity.