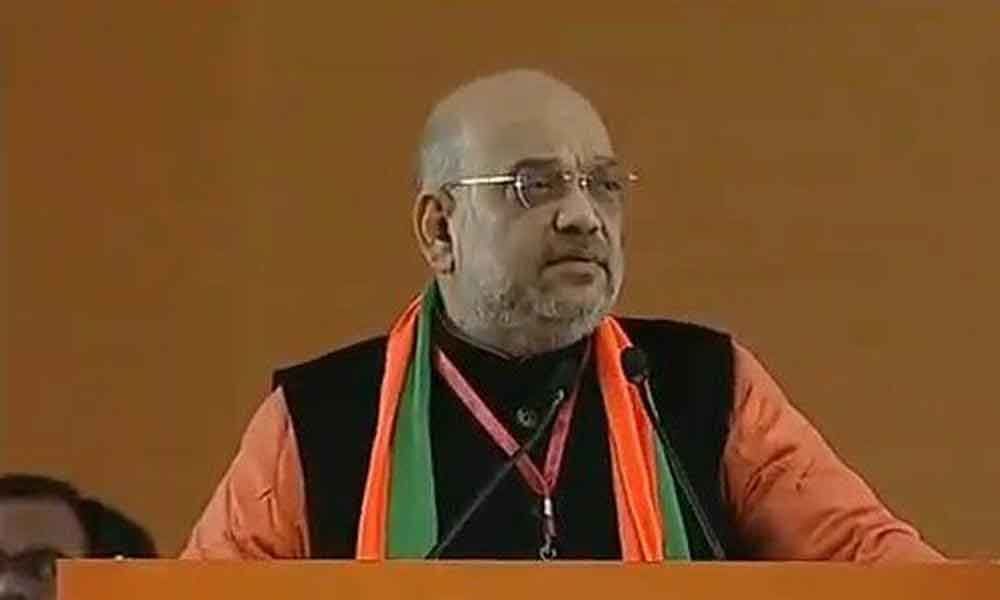 Shah said when the Modi government is re-elected at the Centre, infiltrators will be identified across the country and deported.

Raigarh: BJP president Amit Shah Thursday said Kashmir is an integral part of India and cannot be separated from the country till a single BJP worker is alive, irrespective of whether the party is in power or not.

Addressing an election rally in Raigarh district headquarters in Chhattisgarh, he said when the Modi government is re-elected at the Centre, infiltrators will be identified across the country and deported. "Election is underway in Jammu and Kashmir and an ally of Congress, leader of National Conference Omar Abdullah had advocated for a prime minister in Kashmir. Do you think it's possible that a country can have two PMs? I have been asking Rahul baba to clarify his stand on the (Abdullah's) statement, but he is silent," Shah said slamming Congress chief Rahul Gandhi.

"Rahul baba listen carefully...Presently there is a government headed by Modi ji and it will be re-elected. But even if we are not in power, nobody can separate Kashmir from India till a single BJP worker is alive. Kashmir is an integral part of India and if anyone says that it will be isolated from the country, then people of the country will not tolerate it," he added.

"Another issue is that of NRC (National Register for Citizen). Congress is saying do not bring NRC, but I want to urge you to again elect the Narendra Modi government at the Centre...infiltrators will be identified right from Kashmir to Kanyakumari and from Gujarat to Assam, and deported," he said.

Describing infiltrators as "termites", he said they are a threat to the nation's security. "Our commitment is to throw them out of the country," the BJP chief added.

Shah also alleged that the Congress and other opposition parties are unhappy with the success of the Indian Air Force's strike on terrorist camps at Balakot in Pakistan in retaliation to the Pulwama terror attack. "The Modi government has done the biggest work to safeguard the borders of the country. When terrorists attacked in Pulwama and killed our 40 jawans, there was anger and disappointment in the country. But the Modi government is not like the 'mauni baba' (silent) Manmohan Singh government. Barely 13 days after the attack, air strikes were carried out targeting terror camps in Pakistan," he said.

"At a time when the whole nation rejoiced, there was grief in Pakistan. But there was also sadness in the office Rahul baba and company," Shah claimed. "The guru of Rahul Gandhi, Sam Pitroda, says some kids have committed mistakes and dialogue should be held with them. Do you think talks should be held with those who killed our 40 jawans? Our policy is clear that reply of the bullets will be given with shells. We will not hold talks with terrorists. BJP has a zero tolerance policy against terrorists." The Congress ruled the country for 55 years, but it did nothing for development of poor, Dalits, tribals, villages and cities of the country, he alleged. In the five years of the Modi government, work has been done for the development of 50 crore poor.

Shah also slammed the Congress government in Chhattisgarh and said Ayushman Bharat scheme has been stopped in the state which was meant for welfare of poor people.

He also targeted Chief Minister Bhupesh Baghel for banning the CBI from investigating any fresh cases in the state without seeking the state's consent. "Why was Bhupesh Baghel so afraid of the CBI that he banned it in the state immediatelyafter coming to power. What he has done?" he asked. The Congress had promised to provide unemployment allowance in the state, Shah said, adding, "Are you (people) getting it? No development work is taking place in the state. The law and order situation has collapsed."

Shah was campaigning for BJP candidate Gomtee Sai from Raigarh Lok Sabha constituency which will go to polls in the third phase on April 23.