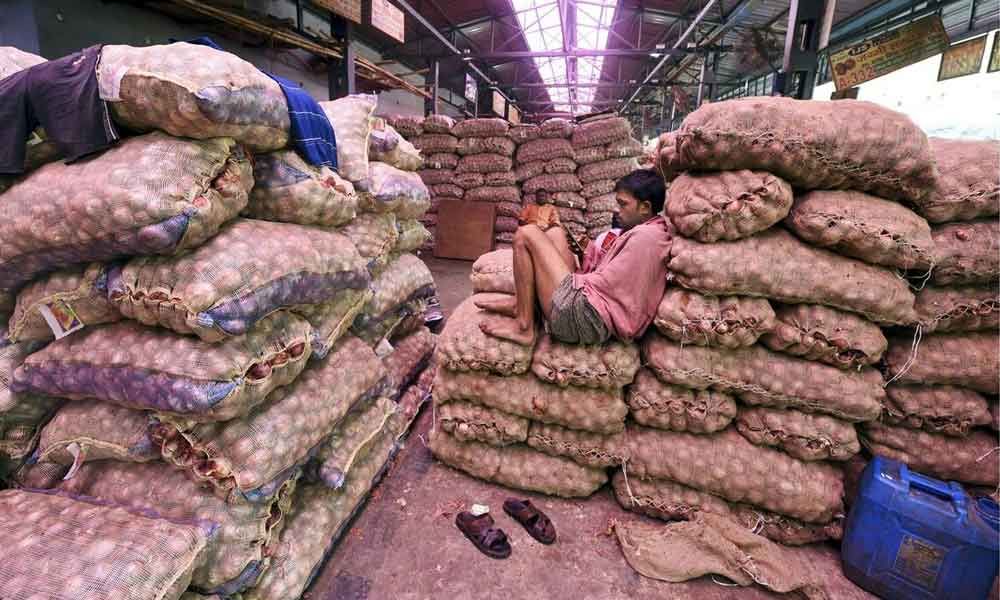 New Delhi : The Centre is mulling imposing stock limits on onion traders as the retail prices of the key kitchen staple have shot up to Rs 70-80 per kg in the national capital and other parts of the country owing to supply disruption in the wake of excess monsoon rains in the major growing states, according to sources.

As per the data maintained by the consumer affairs ministry, retail onion prices rose to Rs 57/kg in Delhi, Rs 56/kg in Mumbai, Rs 48/kg in Kolkata and Rs 34/kg in Chennai last week.

The prices were quoted at Rs 60/kg in Gurgoan and Jammu during the same period.

However, trade data showed retail onion prices skyrocketing to Rs 70-80 per kg towards the end of the last week from Rs 50-60/kg in the previous week.

Onion prices are on the rise despite several measures taken by the central government to boost supply.

"The government has taken several measures in the last few weeks to improve the domestic supply and check further increase in prices of onion.

However, retail prices have suddenly shot up in the last 2-3 days because of supply disruption due to excess rains in the growing states," a source told PTI.

It is a short-term supply disruption and if the situation does not normalise in the next 2-3 days and prices rise, then the government may consider seriously imposing stock holding limits on onion traders, the source said.

Right now, stored onions are sold in most parts of the country as fresh kharif (summer) crop will hit the market from November onwards, traders said.

Traders further said that there is enough supply of stored onion of the previous year's crop in the country but its transportation has been affected because of heavy rains.

Much of the onion is stored in Maharashtra, where rains disrupted the transport of the kitchen staple to other parts of the country, said a wholesale trader from Lasalgoan in Maharasthra, Asia's largest onion market.

At wholesale market of Lasalgoan, onion prices rose to Rs 45/kg last week, when compared with less than Rs 10/kg in the year-ago period.

The Centre has taken several measures to arrest the prices of onion in Delhi and other parts of the country.

It is offloading onion from its buffer stock through agencies like Nafed and NCCF which are selling at around Rs 22/kg and state-run Mother Dairy at Rs 23.90 per kg in the national capital