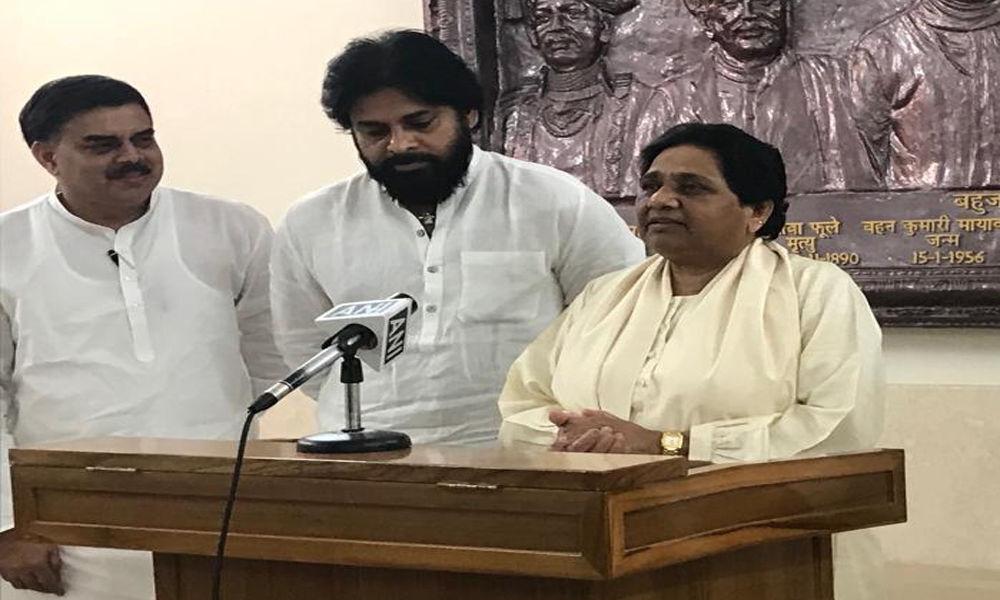 The Bahujan Samaj Party of Mayawati and the Jana Sena Party led by actor-turned-politician Pawan Kalyan on Friday announced their alliance for the Lok Sabha elections.

Lucknow: The Bahujan Samaj Party of Mayawati and the Jana Sena Party led by actor-turned-politician Pawan Kalyan on Friday announced their alliance for the Lok Sabha elections.

The BSP and JSP announced the seat-sharing arrangement for Andhra Pradesh and Telangana, where the two parties will contest the polls together. Disclosing the poll-pact in Lucknow with the BSP president by his side, Pawan Kalyan said his "wish and ardent desire" is to see Mayawati become the prime minister after the Lok Sabha polls.

When Pawn Kalyan said he would work for making Mayawati the prime minister, the BSP chief had a smile on her face and gave a slight nod of acknowledgement. She returned the compliment by saying: "I want Pawan Kalyan to become Andhra Pradesh chief minister." She has been campaigning for a non-BJP non-Congress political front at the national level just like Chief Minister of Telangana K Chandrasekhar Rao.

Mayawati said that "seat-sharing" has already been finalised between the two parties and there is "no dispute" regarding the distribution. The BSP chief will travel to Andhra Pradesh and Telangana on April 3 and 4 to campaign for the BSP-JSP alliance. Pawan Kalyan's JSP makes its debut in the upcoming elections and hopes to make a mark in the state that has been dominated by AP Chief Minister Chandrababu Naidu's TDP and YS Jaganmohan Reddy's YSR Congress.