Will Modi hang himself if his prediction of Opposition proven wrong: Kharge 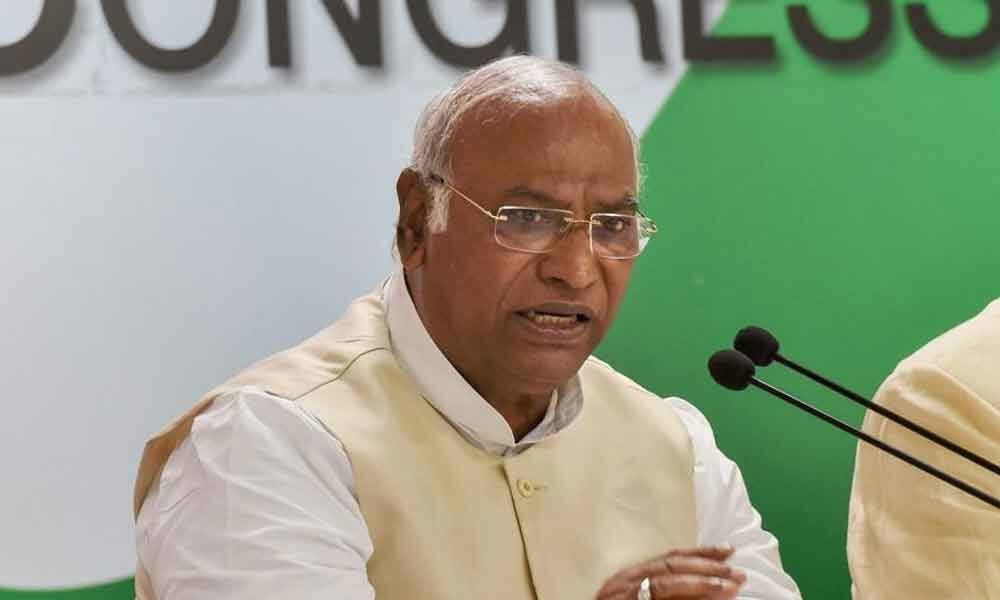 BJP leader Karandlaje has demanded Kharge's apology, saying that she never expected such low remarks from him.

Bengaluru: Stoking a controversy, senior Congress leader Mallikarjun Kharge Sunday asked whether Prime Minister Narendra Modi would hang himself at Vijay Chowk in Delhi if his prediction of the opposition party getting less than 40 seats in Lok Sabha polls is proven wrong.

Addressing a rally in support of Subash Rathod, the Congress candidate for the Chincholi Assembly bypoll in Karnataka, Kharge said, "It is you the people sitting here who are going to write the future and fate of this country, it is in your hands to write the fate of Subash and ours, not it their (BJP/Modi) hands."

"Wherever (Modi) goes, (he) says Congress will not get 40 seats (in Lok Sabha polls). Does any of you agree with this? If we get 40 seats, will Modi hang himself at Vijay Chowk in Delhi?" the senior Congress leader said.

The Congress had won 44 seats in the 2014 parliamentary election.

Senior BJP leader and MP Shobha Karandlaje has demanded Kharge's apology, saying that she never expected such low remarks from a senior leader like him.

Stating that Modi was not even born when India got freedom, Kharge told the rally, "He keeps speaking against Congress and claims the party did not do anything." He said Modi claims himself to be from backward community, but he is helping only the super rich.

Chincholi, along with Kundgol Assembly constituency, is going to bypoll on May 19.

The by-poll to Chincholi has been necessitated by the resignation of sitting member Umesh Jadhav, who quit Congress and joined the BJP to contest the recent Lok Sabha polls from Gulbarga, while the Kundgol seat fell vacant following the death of Minister C S Shivalli.

The main contest in this bypoll will be between the nominees of the Congress, which held the seats, and the BJP.

BJP has fielded S I Chikkanagowdar and Avinash Jadhav from Kundgol and Chincholi Assembly seats respectively.

Seventeen candidates are in the fray from Chincholi and eight from Kundgol.

The results will be declared on May 23, along with that of Lok Sabha poll.

The outcome of the bypolls, along with that of the elections to 28 Lok Sabha constituencies in Karnataka, held in two phases on April 18 and 23, is crucial for the ruling Congress-JD(S) alliance, facing a fresh bout of dissidence.