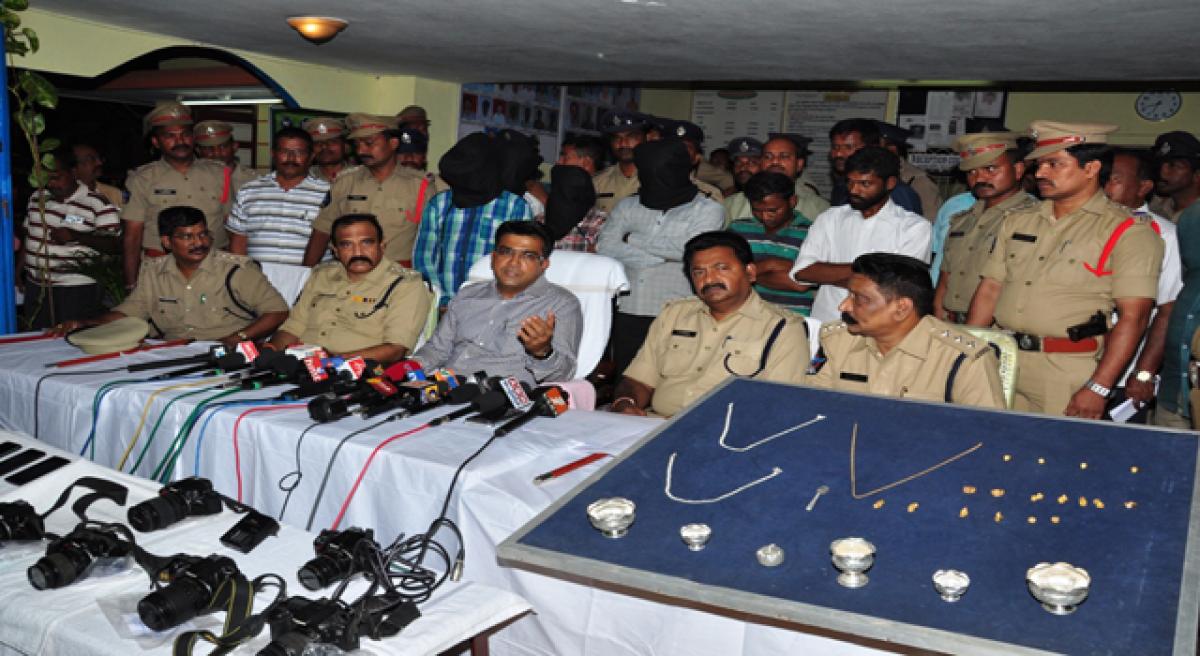 The Prakasam district police arrested nine persons who were involved in 41 incidents of thefts, house-breaking and burglary and recovered property worth Rs 14.5 lakhs from all of them.

Ongole: The Prakasam district police arrested nine persons who were involved in 41 incidents of thefts, house-breaking and burglary and recovered property worth Rs 14.5 lakhs from all of them.

The Ongole police arrested Gogu Sivasankar of Nayudu Palem and recovered 14 motorcycles and 2 autorikshaws worth Rs 6.2 lakhs from him. He was allegedly involved in motorcycle thefts parked outside the houses during nights, using duplicate keys or breaking the handle locks.

The police recovered six cameras, 71 grams of gold and 250 grams of silver worth Rs 3.3 lakhs from this inter-district burglars’ gang. The Addanki police have also arrested Mukku Gopi of Magallu village in Nandigama mandal of Krishna district for involving in burglaries in cell phone shops and recovered 11 mobile phones and 3 motorcycles of worth Rs 1.61 lakh.

Dr Trivikrama Varma, Superintendent of Police, Prakasam district, appreciated the efforts of the Ongole, Addanki and Kanigiri police personnel and distributed rewards for the constables for solving the cases. “There are a number of thefts being registered in the district and we are actively working on them.

In Kanigiri, we are booking cases against the merchants Venkateswara Reddy and Sk Mansoor for buying the coils from the transformer thieves. The department conducted cordon search operation in Chirala two days ago and taken a few suspects in to custody and are going to conduct similar cordon searches throughout district.

We are also booking cases against the merchants under PDPP act, who are buying the copper and aluminium coils extracted out from the transformers.”