Cops caught between the devil and deep sea 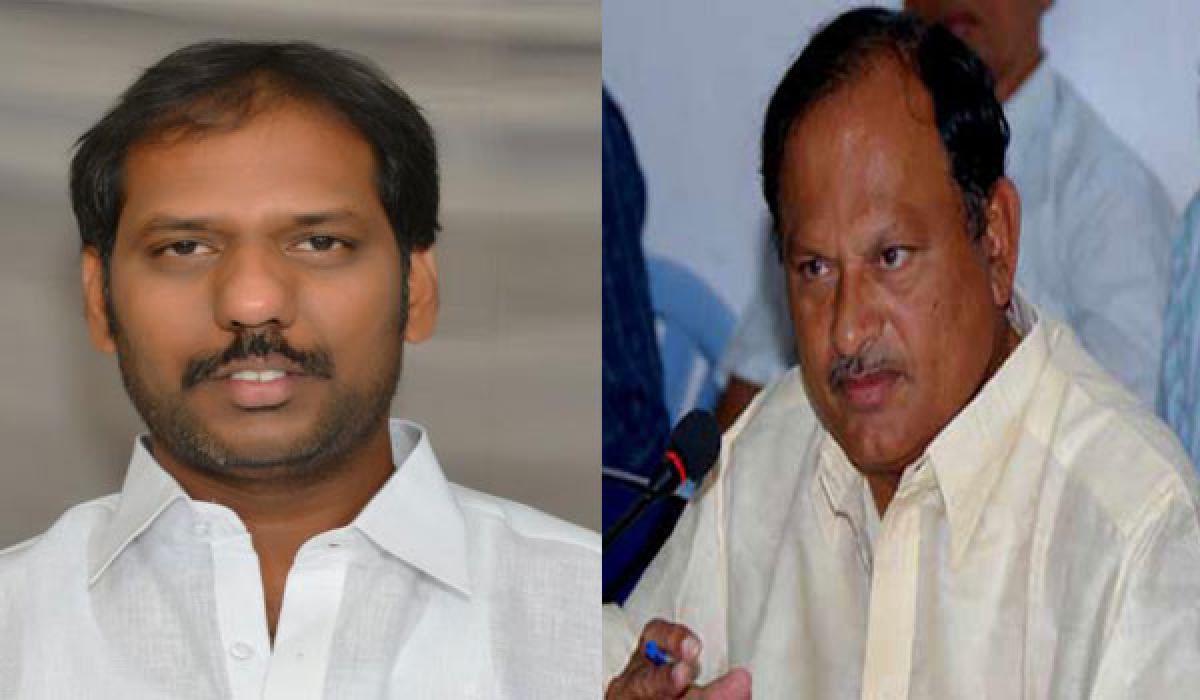 With two bigwigs of the ruling party engaged in all out war against each other, police department in Prakasam district, especially in Addanki Assembly constituency, is caught in a proverbial situation of devil and the deep blue sea. Karanam Balarama Krishnamurthy is a senior leader in the TDP, who is considered as a sort o f backbone of the party.

Ongole: With two bigwigs of the ruling party engaged in all out war against each other, police department in Prakasam district, especially in Addanki Assembly constituency, is caught in a proverbial situation of devil and the deep blue sea. Karanam Balarama Krishnamurthy is a senior leader in the TDP, who is considered as a sort o f backbone of the party.

He is a formidable force in Addanki, with a track record of winning the seat when the party lost at many places in the district in the past. He has been involved in a bloody rivalry with the Gotttipati family for a long time. Gottipati Ravi Kumar, the local MLA who defected from the YSRCP, and his supporters have been locking horns with Karanam Balaram, his son and supporters for many years.

The bloody feud goes back to 30 years, recorded in a series of FIRs in Addanki, Martur, and Ongole police stations. It was Gottipati Hanumantha Rao, uncle of Ravi Kumar, who led the fight against Karanam Balaram. They turned the political rivalry into personal rivalry and even switched parties to survive.

It is the police department that felt the heat when these two families plan to come face to face in daily life. A senior officer in Darsi divisional superintendent office of police said, “It is almost peaceful up to 2009 as the two leaders represent two constituencies, Ravi Kumar in Congress party for Martur and Balaram in TDP for Addanki. Though Balaram is MLA then the number of flashpoints was very rare.

After the delimitation of Assembly constituencies, Martur was abolished and Ravi Kumar was allotted Addanki by the YS Rajasekhara Reddy and the fight resumed.Ravi Kumar won the 2009 election on Congress and 2014 on YSRCP ticket. These two instances created some issues and minor incidents of attacks on each other were reported. But when TDP came to power in 2014 after a decade, the Karanam group increased the pressure on local officials that any work recommended by the MLA should not be carried out. This created many a tense situation and the supporters of both took to streets and engaged in attacks.”

As the Karanam Balaram and TDP in-charge for Addanki, Karanam Venkatesh tighten their grip over the officialdom, Ravi Kumar sprang a surprise by joining the ruling party. A senior official in Ongole DSP office told The Hans India, “After Ravi Kumar joined TDP, they both became ruling party leaders and we have to follow them.

But who to follow is the question. Since Balaram is a senior politician who had followers all over the district and Ravi Kumar is the local MLA, we have no option to say no to any of them. When we receive information about their supposed face off, we are just working hard to see no worst thing happens on that day.

But one thing is clear, Ravi Kumar is gaining grip over local officials as the government is giving more importance to him than Balaram. That is why Hyma Rao is posted as the CI and other sub-inspectors at the preferred locations as demanded by Ravi Kumar.”

A sub-inspector, witness to the exchange of blows between the two groups in Ongole on Tuesday, said he had to take a double dose of hypertension tablets on the day due to the work pressure. “Though we are controlling the supporters of both leaders, the situation has changed when Balaram came into the middle of the hall and lunged towards Ravi Kumar.

Though we are armed and have the force to enough control incidents like this in a different way, we have to follow the orders that no one should use force. So we became mute spectators when the two leaders and their supporters attack one another just before our eyes,” he said.