Currency woes refuse to go away 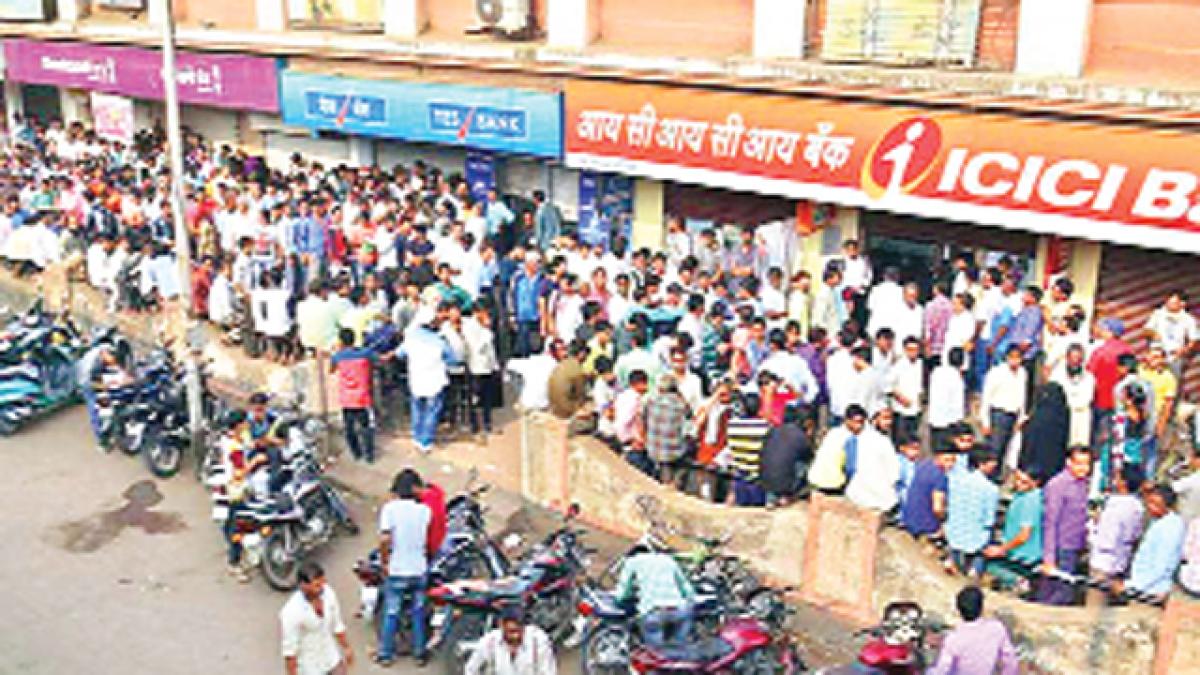 Even after 16 months since scrapping of higher denomination currency notes, people are still facing continual scarcity of cash. Almost since the demonetisation on November 9, 2016, ATMs have not been functioning at their full capacity.

Tirupati: Even after 16 months since scrapping of higher denomination currency notes, people are still facing continual scarcity of cash. Almost since the demonetisation on November 9, 2016, ATMs have not been functioning at their full capacity.

He highlighted the problems faced by people due to shortage of cash with ATMs running out of cash. Several banks were not in a position to disburse the cash demanded by their customers shaking the confidence of public in banks and economic system.

Chittoor district collector PS Pradyumna also wrote to the government to take steps for providing Rs 4,000 crore worth currency notes of all denominations to the district. More than 80 per cent of ATMs in the district remain closed in the district due to shortage of currency.

The government is finding it difficult to pay the bills for various development works, pensions and other needs. On the other hand, Lead bank District Manager (LDM) R Rammohan Rao took the issue to the notice of State-Level Bankers Committee (SLBC) in January, which prompted the committee to write to the Chief Minister seeking his intervention.

The main problem for currency shortage may be attributed to the attitude of people who were keeping money with them instead of depositing it in banks due to various reasons. The fear of Income Tax due t0 transparency in transactions may be one reason, observed a bank manager.

The severe cash crunch haunting the country for the last one and-a-half-year is a major factor for this. People are fearing that they may not get cash from ATMs or banks in time if they deposit it. As a result, currency circulation has been reduced.

Speaking to The Hans India the LDM Rammohan said, “If people keep currency in savings bank accounts they will get some interest. What will they get by keeping at home? Now banks are calculating interest on SB accounts on daily basis which they will credit quarterly.”

Added to the situation is new Financial Resolution and Deposit Insurance Bill, which triggered concerns among people that their deposits would be used by banks in case of financial crisis Whatever the cash issued to the public was not returning to the banks and this was the major problem since demonetisation.

Normally, if a Rs 10 issued, Rs 6 will return to banks which is not the case now. Further, Rs.2000 currency notes were hard to find in circulation again, as people were not taking them again to banks, he observed.

“Each currency chest will have the capacity to store Rs 150-200 crores and there were 20 currency chests in the district. But all of them are having only meagre reserves and this is the reason for not feeding money into ATMs,” LDM Maintained.

During the recent visit of RBI Regional Director to Tirupati, the bankers took up the issue with him but he made it clear that even the RBI had no money. It seems RBI was even asking the banks to encourage digital transactions to a great extent which have come down gradually since January 2017. People were complaining that digital transactions were imposing additional burden on them and they don’t even like the transparency in their spending, observed a manager.

The Regional Manager of State Bank of India PM Patro said they have 17 currency chests out of the 20 in the district and they have the most number of ATMs than any other bank. Obviously, most of the ATMs of SBI only remains closed with out of cash. “The situation in Tirupati is far better compared to other places in the district and even places like Kadapa.

Due to the blessings of Lord Venkateswara, we are managing somehow the cash flow from Tirumala in Tirupati. For some time, we brought cash from private banks and tried to feed it in ATMs. Even that was also not possible all the time,” he said. Lack of cash rotation was the sole problem and unless this attitude changes there may not be an improvement in the situation, he opined.