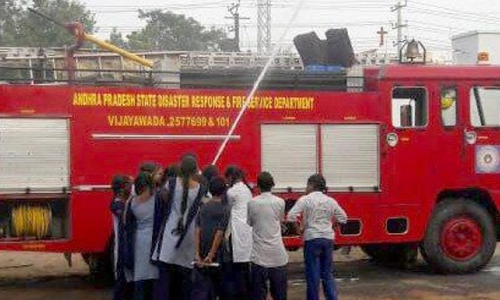 Vijayawada: An awareness programme on fire was organised for the students of Gandhiji Municipal High School by Vijayawada Municipal Corporation under the aegis of Regional Fire Officer Uday Kumar here on Tuesday.

A demo was organised by the fire department staff, when a fire breaks out in a house due to gas cylinder leak and short circuit.

The immediate action to be taken is to get out of the accident. The fire staff made the students to participate in the awareness programme by involving them in the live demo.

The fire staff gave the demo on how to use breathing operator set when thick smoke erupts due to fire accident.

They also explained how to face the situation to come out safe when fire breaks out in cinema theatres, malls, public places and schools.

The students participated in the programme with enthusiasm and later interacted with the fire staff and clarified their queries.