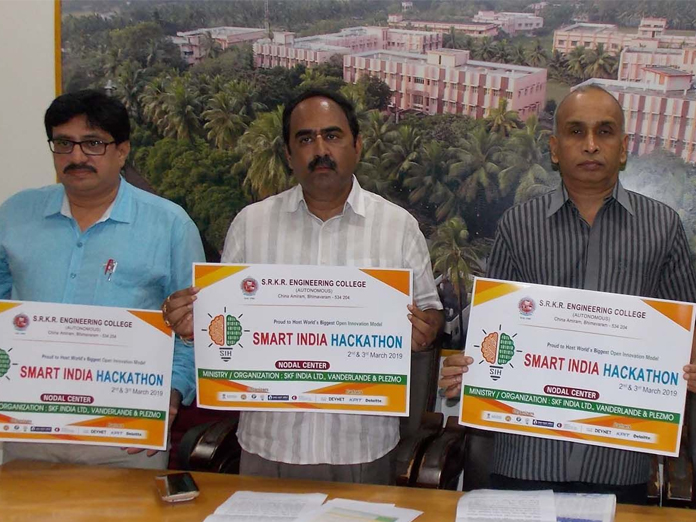 The Smart India Hackathon2019 programme would be held at SRKR Engineering College here on March 2 and 3, according to the college principal Dr G Pardhasaradhi Varma on Thursday

Bhimavaram: The Smart India Hackathon-2019 programme would be held at SRKR Engineering College here on March 2 and 3, according to the college principal Dr G Pardhasaradhi Varma on Thursday.

A poster was released on the occasion by the college secretary and correspondent Sagi Vithal Rangaraju.

Speaking on the occasion, the college Technology Centre head Dr N Gopalkrishna Murthy said the programme would be organised jointly by the Human Resources Miniseries and AICTE. As part of the programme, a group of engineering students would develop a project successfully within 36 hours.

Murthy said that Prime Minister Narendra Modi will address about the programme at 8 pm on March 2 live from the PMO and may interact with the students also. He said the Smart India Hackathon programme was the brainchild of Narendra Modi, inaugurated in 2016.

The principal said that in this programme, some industrial experts will attend and give prize money of Rs 6 lakh for the best project. He said India’s Smart India Hackathon programme is popular worldwide.

He said that the PM personally initiated the programme. Students from eight States would be participated in the programme, he added.