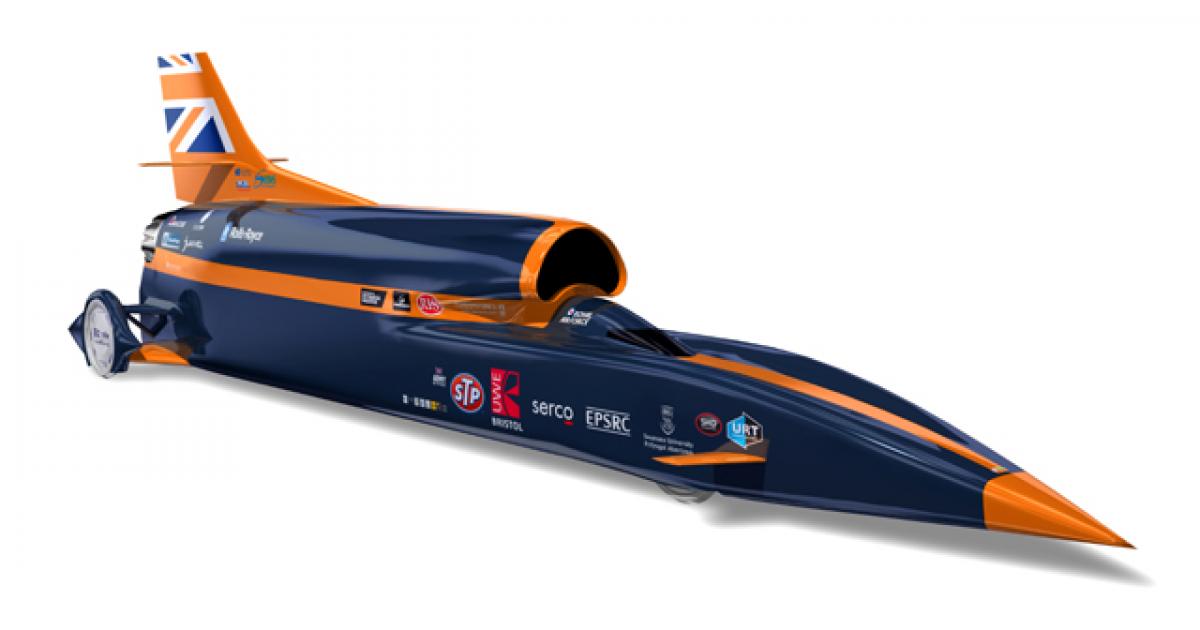 Bloodhound SSC, the world’s fastest car, is all set to make its global debut on November 17. At the debut to be held at Newquay Aerohub in Cornwall, the Bloodhound will complete a 200mph ( 320kph) test. The car will be driven by Royal Air Force Wing Commander Andy Green, who already holds the land speed record at 763 mph ( 1228kph). He will pilot the Bloodhound SSC to set a new 1000 mph ( 1600kph) land speed record.

After the initial test at Cornwall, the team will then head over to Haksken in South Africa the next summer. Providing technical assistance to this land speed record assistance will be Jaguar, the Royal Air Force, the Army’s Royal Electrical and Mechanical Engineers and Morgan Advanced Technologies.

The Bloodhound SSC will be partly powered by a Eurojet EJ200, which is used in the Eurofighter Typhoon fighter aircraft. Once up to speed, Andy Green will fire up the rocket engine, which is rated at 77,500 bhp.

This rocket engine is a hybrid and is not only the largest in the UK, but the largest in Europe. It is 4 metres long, 460mm wide and uses solid rubber as a fuel, with hydrogen peroxide as the oxidiser. The rocket flame temperature will be upwards of 3,000 degrees Centigrade.

Jaguar has tied up with the Bloodhound SSC team for technical and marketing assistance. They will be providing a supercharged F-type V8 engine to power the fuel pump (at a rate of 40 litres an hour) for the rocket engine. The Bloodhound SSC was earlier tested with a Cosworth F1 engine.

Three different brakes will be used. An arrangement of winglet-operated airbrakes will deploy at 800 mph(1288kph), which will be followed by a parachute at 600mph(960kph) and finally a specially-designed disc brake, which will be ready for use at 200mph ( 320kph).

Jaguar has already tested the parachute system using a specially-modified F-type R. The car featured a modified rear window and structural supports through which the SSC’s teardrop shaped parachute cans were mounted on the car’s chassis.

The test took place at a Royal Air Force Runway in Bentwaters, Suffolk. The car will use a cockpit shell that is being made of a new composite material. The wheels of the Bloodhound SSC will be rotating at 10,200 rom, and will kick up a lot of debris. This can damage the car’s structure.

Recent ballistic tests have shown that the material designed by the SSC team, along with technical assistance from Morgan Advanced Technologies can protect Andy Green from these debris.

To test the communications system for the Bloodhound SSC, the team drove an AWD F-type across the Hakskeen Pan desert in South Africa towards a fighter jet travelling at 500mph (800kph) in the opposite direction. The closing speed was almost 700mph (1127kph), which will be the speed at which the SSC will be travelling.

The Bloodhound was first revealed in 2010, with the new rocket engine design being showcased in 2012. The car was on display at the 2014 LA Motor Show in November. The total cost of the project is around 8.5 milllion pounds, or Rs.83.66 crore, over four years.

Jaguar’s Special Vehicle Operations ( SVO) has also built Rapid Response Vehicles based on the Jaguar XJR. Called the MY XJR, these cars include a roll-cage, fittings to carry emergency response equipment like a foam misting cylinder, a hydraulic pump, motor and hose, and tools supplied by Angloco. This car will be launched on June 27 at the Goodwood Festival of Speed.