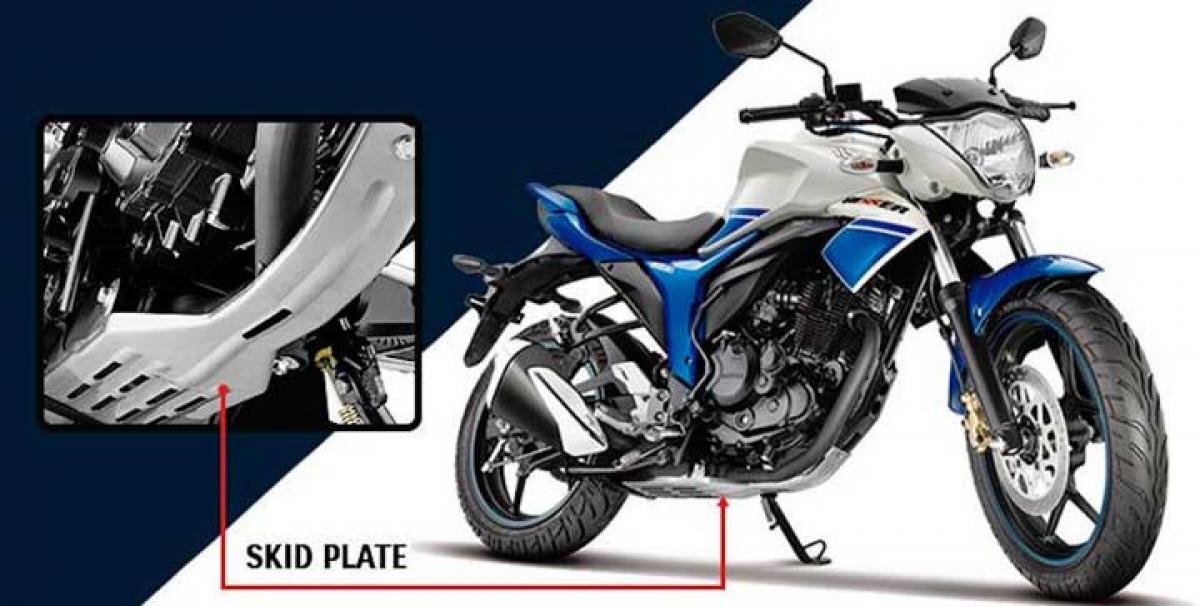 A lot of thought and attention was paid when developing the Gixxer 155 and clearly Suzuki has benefitted well from an extremely potent product.

A lot of thought and attention was paid when developing the Gixxer 155 and clearly Suzuki has benefitted well from an extremely potent product. Not only the naked version but the fully faired SF is clocking good numbers every month as well. One of the more proactive things done by the automaker was to respond to customer feedback right from the start and resolve issues immediately, especially the rusting problem. This time, the automaker has taken customer feedback into consideration by adding a skid plate to combat the low ground clearance.

Due to heavy load, the suspension would bottom out on the Suzuki Gixxer which could cause the bike’s underbelly to scrape, thereby damaging the exhaust bend pipe and the catalytic converter. The skid plate acts a protectant against the harsh terrain and gravel starting from the main tube and extending up to the exhaust. That said, the automaker won’t be handing it out to you at your next service and instead the silver finished skid plate needs to be purchased as an accessory for Rs. 1600/- from the dealership.

Suzuki’s constant endeavour to improve the Gixxer is highly appreciated by us and shows the automaker’s attention towards customer feedback. As a result, the Gixxer has turned out to be a popular offering in the 150cc performance segment with power coming from a 155cc single-cylinder, air-cooled engine tuned to churn out 14.6 HP at 8000 RPM and 14 Nm of torque at 6000 RPM, paired to a 5-speed gearbox.

In addition, Suzuki India is working on the rear disc brake variant for the Gixxer and SF that were spotted testing earlier this year and are likely to be introduced in early 2016. While the changes are minuscule in number, they do keep the model relevant as the Honda CB Hornet 160R enters the segment. Furthermore, Suzuki is working to introduce the Gixxer 250 next year that could be showcased at the 2016 Auto Expo.