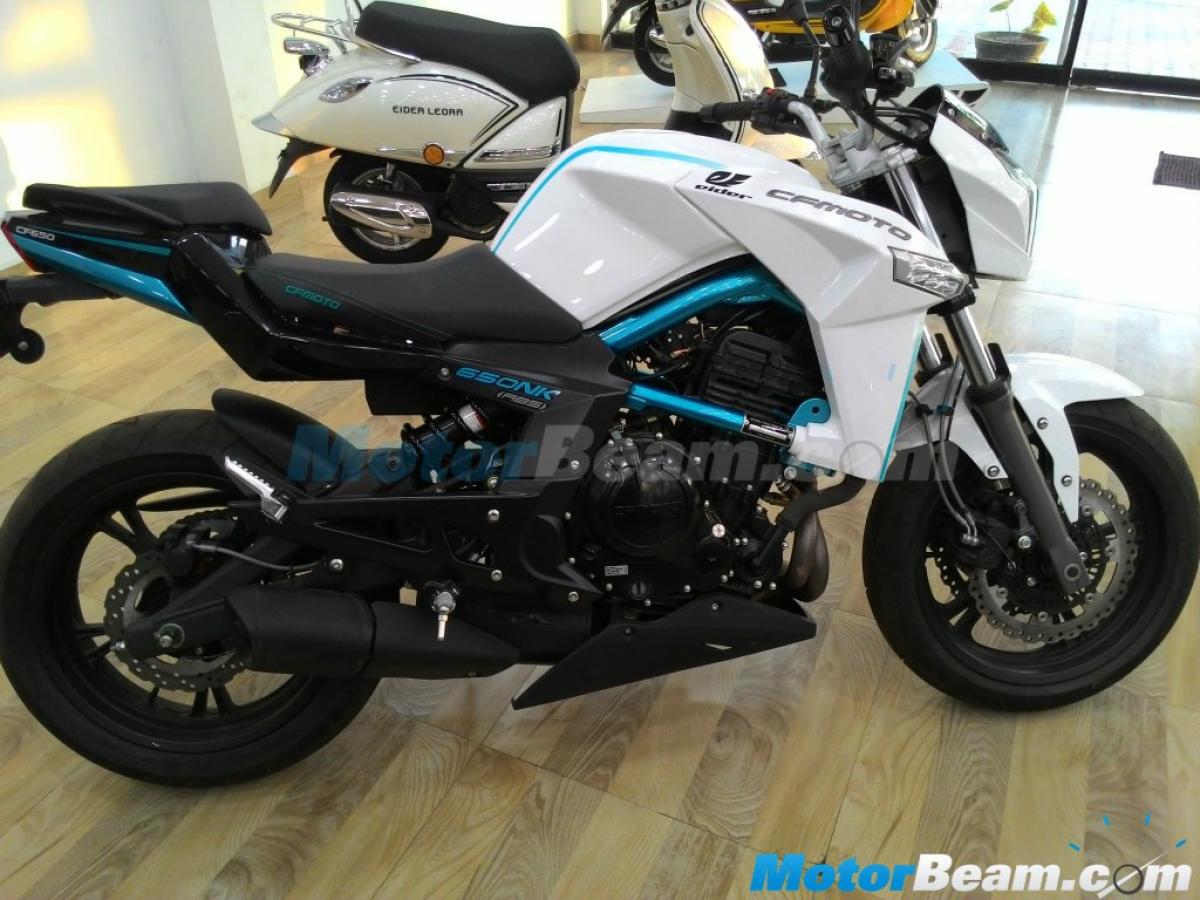 The 650 NK produces 56.4 PS and 62 Nm of torque when mated to a 6-speed gearbox.Hyderabad-based Eider Motors has started retailing Chinese CFMoto...

The 650 NK produces 56.4 PS and 62 Nm of torque when mated to a 6-speed gearbox.Hyderabad-based Eider Motors has started retailing Chinese CFMoto motorcycles and scooters in India. The rather interesting Eider CFMoto 650 NK street fighter has been priced at INR 3.37 lakhs (including taxes and Checkup) which is way cheaper than the 600-650 cc street bike offerings from mainstream brands like Kawasaki and Benelli.

The 650 NK adopts an interesting appearance with several vaguely familiar design. For example, the headlamp fairing strongly resembles to that of the Benelli 600i. The sportsbike features an exposed chassis, muscular fuel tank with sporty extensions, split seats, high mounted handlebar and thick tyres.

CFMoto Chinese Motorcycles by Eider Motors (2)
The bike aims to be a poor man’s Kawasaki ER-6f.
Suspension system comprises a sturdy Kyaba telescopic fork upfront and Kyaba monoshock at the rear. The front wheels are retarded by twin discs while the rear wheel employ a single disc. The motorcycle has a dry weight of 193 kg.

The 649.3 cc parallel-twin liquid-cooled engine is paired with a 6-speed transmission to produce reasonable outputs of 56.4 PS and 62 Nm of torque. Performance figures are not mentioned in the official website.

CFMoto Chinese Motorcycles by Eider Motors (3)
The styling contains a lot of vaguely familiar elements.
The Eider CFMoto 650 NK is by far the most affordable 650 cc motorcycle the country and has no real competition in the country as of now. However, quality levels, service network and availability of spares are somethings to be analyzed before signing the cheque.

Prices of rest of the portfolio has also been revealed at Eider Motors’ official website.

This article has first appeared on: Rushlane.com