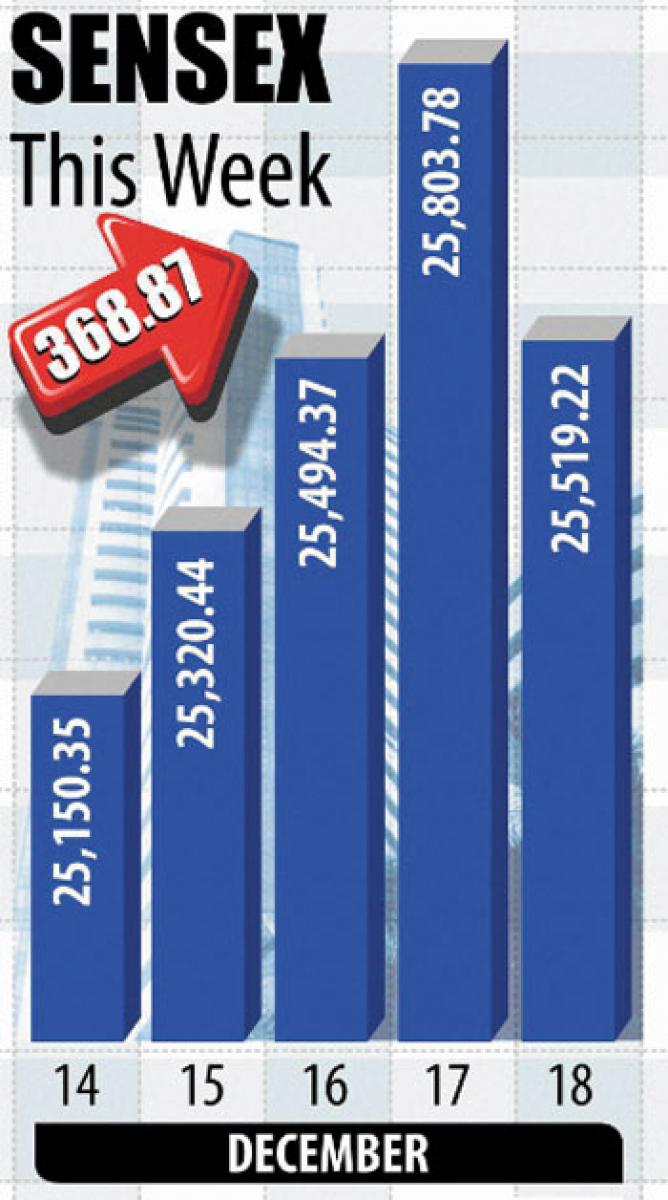 But for the last days fall of 285 points on increased selling pressure and concerns over GDP growth apart from failure of the government in getting the crucial GST bill cleared in the current winter session, the stock markets would have registered one of the biggest weekly gains in the last week.

But for the last day's fall of 285 points on increased selling pressure and concerns over GDP growth apart from failure of the government in getting the crucial GST bill cleared in the current winter session, the stock markets would have registered one of the biggest weekly gains in the last week.

Even as the most crucial Fed rate hike announcement, the markets commenced the week under review with renewed hopes of revival of a bull market ahead of the Union Budget and the BSE Sensex, after initial and brief hesitancy, sorted to an uptrend that continued to dominate the markets in the first four trading sessions.

Sensex stood to gain 760 points at the end of the first four trading sessions closed Thursday on increased buying support from both small and big investors and also on short-covering by bear market operators. However, the last day's fall of 285 points left Sensex with a net benefit of 475 points, which too turned out to be the biggest weekly one in the past two months.

The US's banking regulator, Federal Reserve, ultimately announced a hike of 25 basis points in its key interest rate, after about nine years of near zero rate regime. It also hinted a next hike in the first quarter of the year 2016, meaning a next rise is also a near possibility.

But since the last week's hike in the interest rate by the Fed being much in discussion since long had already been factored in market prices not only those in India but also globally and especially all the emerging markets. So the "bad news," when struck, had already been discounted and did no harm the markets.

On the contrary, those believing in "buying on bad news" were to the fore and bought shares and lifted the markets up in the last week. However, a few near term concerns like failure of the government in getting the GST bill cleared in the Rajya Sabha, Congress's likely agitation over possible arrests of its chair person Sonia Gandhi and vice chairman Rahul Gandhi in National Herald case and last but not the least, the finance ministry's assessment of a lower growth this fiscal, came in the way of the markets going straight up on the fifth day of the week.

These concerns are likely to keep the markets under stress in the next week as well as the Parliament session is nearing to an end this week without passing the GST bill. The world crude oil market is also consistently headed down impacting major commodities adversely.

The woes faced by the world's second largest economy, China, and its currency, are yet more crucial issues that have already disturbed the global markets and are yet to be stabilized. A short-term negative impact is also likely to be felt of the end of the year's last month's derivative contracts approaching fast a week later.

The consistent selling pressure from the foreign institutional investors (FIIs) that had been witnessed in the past three to four months is also likely to halt for the reasons that the managers of the funds will resort to adopting a vacation mood for Christmas and also in the wake of year end.

According to many market experts, with likely progress of the Indian economy and the government's efforts to introduce and implement economic reforms, the FIIs would be attracted to return to India, but only from January 2016, when they would get fresh fund allocations from their parent bodies, to be invested throughout the year 2016. Till then the markets might fluctuate both ways, narrowly, but with an upwardly bias.

If such upwardly bias in market trend appears evident, it should be treated as a sign that a fresh boom based on Budget hopes, is at the corner, and therefore, an indication to the prospective buyers that it is now time to act.

Those investors who themselves also agree to a possibility of a "pre-budget" rally coming closer, must start buying and while doing so, they should pick up the battered down mid-cap and small-cap shares as those will be the ones to rise faster than the leading and blue-chip ones. They also should keep away from buying banking stocks and telecom shares.