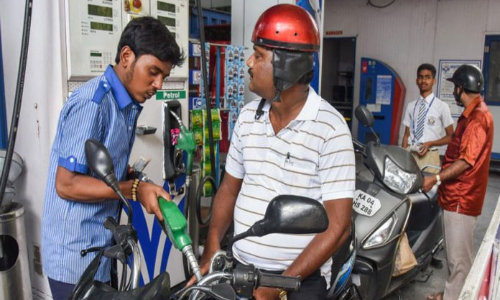 With oil prices on the boil just as general elections are announced, Oil Minister Dharmendra Pradhan has asked worlds largest oil exporter Saudi Arabia to play an active role in keeping rates at a reasonable level

Petrol and diesel prices, which are revised daily, have been on the rise for the last one month or so.

Petrol and diesel prices have risen by over Rs 2 per litre in last one month as international rates have risen on hopes of the United States and China ending a trade war that has slowed down the global economic growth and OPEC ally Russia saying it would ramp up its crude supply cuts.

Pradhan raised the issue of rising oil prices with the visiting Saudi Oil Minister Khalid Al-Falih late last night and sought a role of the Kingdom in cooling rates.

"Shared my concern on the rising oil prices and sought active role to be played by Saudi Arabia for keeping oil prices at reasonable level," he tweeted after the meeting.

An official statement issued Sunday said: "During the meeting, Pradhan referred to Saudi Arabia's pre-eminent role as a leading producer of crude oil in the world, and in maintaining global oil market balance."

"He raised concerns about increasing trend in global crude oil prices. He also pointed to the need for uninterrupted supplies of crude oil and LPG to India in view of the OPEC-plus (decision to) cut (output)," it said.

Both ministers, it said, also discussed about the possible adverse impact of recent geopolitical developments on global oil market.

It, however, did not say about the Saudi Oil Minister's response to India's demand.

Petrol and diesel prices, which are revised daily, have been on the rise for the last one month or so. Petrol price in Delhi has increased by Rs 2.12 a litre to Rs 72.40 on Sunday, while diesel rates have risen by Rs 2.03 to Rs 67.54 per litre.

"Both the ministers agreed to take concrete steps for early implementation of the decisions taken in the oil and gas sector during the visit of His Royal Highness Crown Prince Mohammed bin Salman bin Abdulaziz Al Saud to India last month," it said.

The visit, it said, reflects the intensifying engagement between the two countries in the hydrocarbon sector.

Saudi Arabia is the second largest supplier of crude and LPG to India. In 2017-18, India's crude oil imports from Saudi Arabia were 36.8 million tonne, accounting for 16.7 per cent of its total imports.

"Met HE @Khalid_AlFalih, Ministry Of Energy, Industry and Mineral Resources, Saudi Arabia and discussed about further strengthening the strategic partnership that exists between India and Saudi Arabia," Pradhan tweeted.