A dramatic tribute to teachers 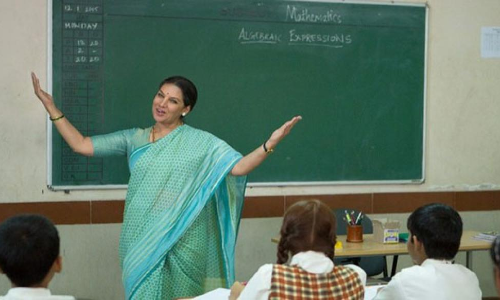 Every self-respecting educationist, every conscience student and every teacher who has worked a lifetime dedicated to the profession go see ‘Chalk N Duster’. This Jayant Gilatar’s tribute to the hallowed profession which has seen its nadir in the country is unhesitatingly recommended not so much for its execution as for its thematic content.

Every self-respecting educationist, every conscience student and every teacher who has worked a lifetime dedicated to the profession go see ‘Chalk N Duster’. This Jayant Gilatar’s tribute to the hallowed profession which has seen its nadir in the country is unhesitatingly recommended not so much for its execution as for its thematic content. Never have platitudes sounded so honest – albeit inaccurate. There is a message making the rounds in social media which refers to a teacher who pride-filled claims: I make kids sit through 40 minutes when parents can’t for five; I make them wonder, question; apologise and mean it; I make them read and write; I make the classroom safe for all; I make the difference in the life of others by educating their children. While pompous it may sound, in everybody’s life there is at least one teacher who leaves an impression and many who labour with commitment. I have had the privilege of seeing many in my lifetime – more here than in any other profession.

‘Chalk N Duster’ is a dramatic tribute to them. The nitpickers would find it one-sided as also simplistic. They could also fault the adulation as one-sided and the divide between the good and bad too black and white. All this and more, notwithstanding the film has purpose, it has feel, it has honesty and sincerity. The Kantaben High School has a nice group of teachers, which include the principal Indu Sastry (Zarina Wahab – arguably at her dignified best), Jyoti (Juhi Chawla), Vidya Sawant (Shabana Azmi) and Manjit (Upasana Singh). To mess with them is the ambitious Kamini Gupta (Divya Dutta). Now Kamini worms her way up to the good books of the management headed by Amol Parekh (Arya Babbar). The hitherto friendly atmosphere gets toxic, teachers are denied basic facilities, fees enhanced, staff policed without cause and finally shown the door. When this happens to Vidya, the local competitor (Jackie Shroff) comes to know about it and decides to expose it all through the local reporter Bhairavi (Richa Chadda).

What makes the film gripping and viewable during its entire run of just about two hours is it’s no frills narration. The editor (Santosh Mandal) ensures that there is strict adherence to the relevant and that the grip is never lost to theatrics or needless bylanes. Baba Azmi with his cinematography makes things visibly simple. Ranjeev-Neetu the duo responsible for story, screenplay and dialogue, eschew the pedantic and leave an impression of telling a story we all connect with if only we had looked around in the formative years!

While many of the artistes move like a cloud or a whiff of air, the main actors leave a lasting impression. Juhi Chawla has shown the preparedness to take actors of great repute in her stride and share cinematic space with them without making much ado: Amritha (Aaina), Madhuri (Gulaab Gang), Kajol (Ishq); she now dares to be alongside Shabana and returns with equal ease and respectability. She is that endearing life filled to the staunch emotional fighting determined Shabana, who needless to say gives the role just that much that it requires and how well she reiterates her understanding of the craft requires to be seen to be appreciated. Strangely even doing a shade better than the phenomenal Shabana is Divya Dutta in the negative role. She is frightfully realistic in the negative role.

To revert to the popular message the teacher says: I make a difference in all your lives, educating kids and preparing them to become CEOs and doctors and engineers. We who are never tired of talking of the Vishwamitra-Rama paradigm or the Drona-Arjuna model, let us for once put our money where our mouth is and go buy a ticket for the film and pay our respects to teachers. Let us humbly recognise the contribution of ‘Chalk N Duster’.