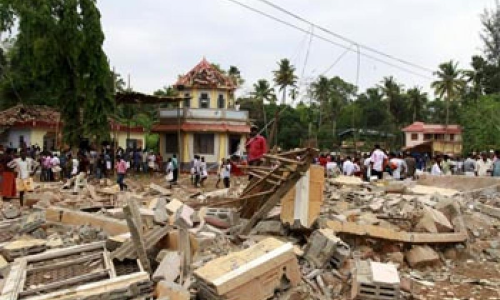 The horrific tragedy at a temple in Kerala reveals the serious flaws in our temple administration and more specifically India‘s capacity to manage crowd related disasters.

Unfortunately disasters are not new to our temples and religious places. Kerala itself saw a monumental tragedy at Sabarimala. Still lessons are not learnt. Disaster management is not taken seriously. Exuberant display of fire power cannot be considered as sacred ritual. People who talk about religious sensibilities should acknowledge that none can be above the rule of law. Indian democracy always produces brazen political tourism after every such tragedy. But, the political system fails to evolve any sound disaster management strategy.

Fireworks display and use have caused several such disasters in the past. Still neither the temple nor the district administration could prevent competitive fireworks. The temple administration has in fact engaged a person whose fireworks license had expired. This indicates how people who run temples or religious places enjoy power without accountability. Trusts running religious places are power houses socially, politically and economically, making observance of rule of law difficult.

A petition was pending before the district collector for many years against use of fireworks in the ritual. But, the administration was vulnerable to the socio-political clout of the religious authorities. Temples have no crowd management procedures. Any attempt to regulate is often seen as interference in religious affairs. Crowd management in temples or at other religious congregations should be handled by professional agencies. This monumental tragedy should not be allowed to be consigned to screaming headlines in media.

Despite Parliament enacting disaster management act more than a decade ago, there seems to be no strategy for managing mammoth crowds for risk involved events. Religion cannot be a holy cow. Religious administration cannot escape the rule of law in the name of customs and traditions. Scientific crowd management techniques and procedures must be followed. There should also be a soul deep change in sanctioning celebrations without mortgaging freedom of worship.

More than hundred lost their lives and many more hundreds suffered serious burns. This was certainly an avoidable tragedy. The state cannot succumb to people’s beliefs in an irrational manner. Customs and traditions should also be in consonance with rule of law in modern India. The temples and their surroundings should be disaster-proofed. Human life cannot be held ransom to the display of pomp and show.