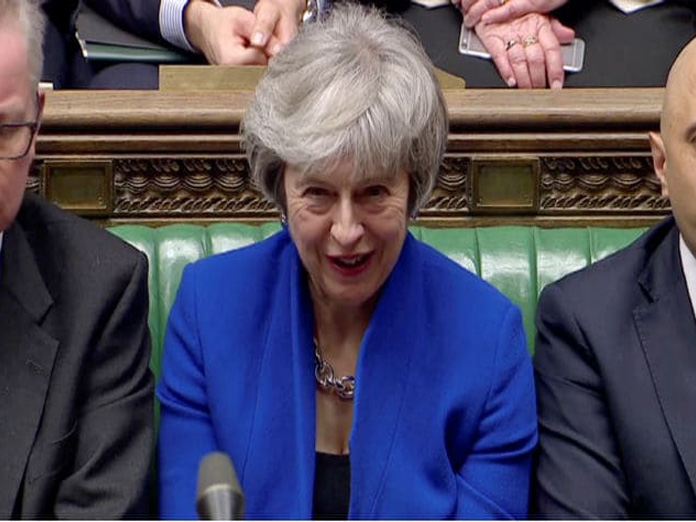 British Prime Minister, Theresa May, has once again survived a confidence motion a day after her Brexit deal was crushed to a historic legislative defeat The countdown to the Brexit deadline has begun and the United Kingdom is still to make up its mind on the true meaning of Brexit

British Prime Minister, Theresa May, has once again survived a confidence motion a day after her Brexit deal was crushed to a historic legislative defeat. The countdown to the Brexit deadline has begun and the United Kingdom is still to make up its mind on the true meaning of Brexit.

Does Britain need a Brexit really? Well, even the Britishers do not know about it. Theresa May's Brexit deal which was a product of two years of tortuous negotiations in Brussels was overwhelmingly rejected by the House of Commons.

This is the biggest defeat inflicted on any government ever. The British Prime Minister is in a race against time to revamp and resuscitate her deal before Britain's scheduled departure from the EU and setting up a 21-month transition period to negotiate a free trade deal.

The very vote was originally scheduled for December, but May preferred to push it further to seek the support of more MPs. Is that a mistake? The UK is still on course to leave on 29 March, but the defeat throws the manner of that departure into further chaos. MPs who want either a further referendum, a softer version of the Brexit proposed by May, to stop Brexit altogether or to leave without a deal, will ramp up their efforts to get what they want, as a weakened PM offered to listen to their arguments. May has survived not because she is liked by one and all, but because of the Hobson's choice of her supporters and opponents.

No one among the Conservatives nor the Democratic Unionists (DUP), the Northern Irish Party that supports the Prime Minister in big votes, wants a general election. The peculiarity of the latest defeat vote is that it tells one clearly that the deal is not to be supported in the present format. But it does not tell anyone anything about what it does support. Meanwhile, the jokes continue to circulate. Everyone keeps mocking at the UK for its decisive indecisiveness. Hard Brexit, soft Brexit, liquid Brexit... they are all laughing at it. Such situations are not uncommon. Several countries are grappling with similar choices.

Someone would always say 'common it is democracy and the majority opinion matters'. Well, democracy does not always work... in favour of the people or the nation. Theresa May is still more or less the Prime Minister of the more or less United Kingdom of Great Britain and Northern Ireland as people put it. The tempestuous melodrama that has befallen the UK since it voted to leave the European Union in 2016 has surprise that who have been following it closely.

It seems likely that will mean reaching across the divide and appealing to people in both the Labour Party and the DUP who might be able to knock their heads together and find a majority for something that May can take to the EU. There could be a way out if UK potentially moves to accepting membership of the single market and some sort of customs union with the EU, along with all the obligations that accompany them.