How to kill the holy cow 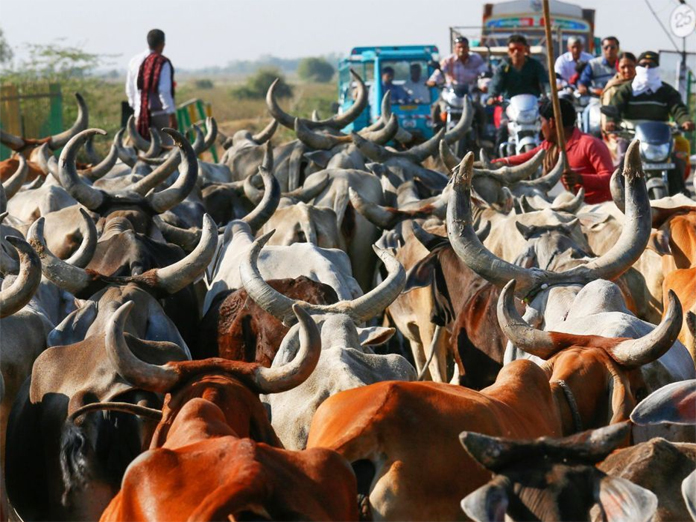 The BJP is committed to the protection of the cow This is welcome However, the policy implemented by it is leading to exactly the opposite result The cow will become extinct like the lion and may be found only in the goshalas in the future

The BJP is committed to the protection of the cow. This is welcome. However, the policy implemented by it is leading to exactly the opposite result. The cow will become extinct like the lion and may be found only in the goshalas in the future.

The Uttar Pradesh government has strictly enforced the ban on cow slaughter. However, the farmer does not find it profitable to keep the cow. Therefore, he leaves them astray. These stray cows are destroying the crops. Now the UP government has decided to establish goshalas where the stray cows will be captured and kept.

Similarly, the farmers of Uttarakhand have formed teams to catch the stray cows that are then loaded on truck and let off in another area tens of kilometers away. The farmers of the new area then catch the cows and let them off in yet another area.

The poor cows are caught and transported repeatedly until they die of starvation in the wild. As a result, the cow has been taken away from the farmer and now kept in the goshalas like the lion being kept in the zoo or left in the wild to die.

The cow is given the status of mother in the Hindu culture. Perhaps the reason was that she helped in the attainment of the three objectives of human life spiritual, economic, and physical. One old person lay on his deathbed in extreme pain, but he could not die.

A cow got donated by him from his deathbed and he was released from his physical bondage peacefully. At the level of economics, the village economy was dependent on the cow. She converted grass from the grazing lands into manure, fuel, milk and bullocks.

At the physical level, cow’s milk contains higher levels of Solid Non-Fats which have higher nutrient value than buffalo’s milk. Thus, the cow was helpful in the attainment of spiritual, economic and physical objectives of mankind.

No wonder, wealth of the framer was reckoned by the number of cows he had. Many kings of the country like Maharaj Ranjit Singh had banned cow slaughter because they wanted to protect the village people from unscrupulous elements who wanted to kill cows for meat and in the process destroy the well-being of the people.

The present situation is very different. The cow is providing spiritual and physical benefits as previously, but the economic situation has changed dramatically. Firstly, the invention of the tractor has made the bullock redundant. The cost of ploughing by tractor is less than by the bullocks.

Threshing too is done quickly and harvested crops are saved from damage by rains. The farmer does not want to maintain the bullock anymore because cheaper alternative of tractor has become available. Secondly, the common grazing lands have been encroached upon.

Earlier the cow used to graze in these pastures and there was not much need to feed her manually. The encroachment of the pastures has deprived the cow of her preferred grazing.

Thirdly, the dependence of the farmer on cow dung as manure is less now. Chemical fertilizers can provide sufficient nutrition to the crops. The soil fertility is also maintained if they are applied along with vermicompost or green manures. For these reasons, the farmer is no longer dependent on the cow for his economic betterment.

The cow has become an economic liability for the farmer though it is still helpful in spiritual and physical pursuits. Our sacred texts say that the economic objectives should be pursued in a manner that they do not hurt the spiritual objective.

Accordingly, the farmer should be asked to sacrifice his economic profit in order to attain spiritual progress. The ban on cow slaughter is appropriate from this standpoint. However, the farmer has to feed his child before he feeds the cow.

There is story in the Mahabharata which throws light on the issue. Sage Vishwamitra was roaming the countryside once in a period of drought. He took shelter in a low caste household where only dog meat which is prohibited was available for food.

The sage nevertheless partook of the meat. On being asked, he explained that he could undertake penance and cancel the sin of eating dog meat; but there would be no progress if he died.

The only way to conserve the cow and to obtain the spiritual benefits is to make it economic for the farmers to maintain her. The first step is to allow the killing of the male progeny. The cow is somewhat profitable for the farmer.

However, the male progeny of the cow is a liability for him. It is not useful for farming operations and it cannot also be killed. Hence, the farmer has stopped keeping the cow altogether. A solution could be that killing of the male progeny could be allowed.

The cow brigade will be angry at this suggestion. Can we kill the male child of “mother” cow, they would ask. This argument needs reconsideration. We plough the “mother” earth. We split her body with spikes. We put the water of “mother” Ganga through turbines to produce electricity.

The second step that can be taken is to educate the people about the benefits of cow milk. Milk has two components fat and Solid Non Fat or SNF. Buffalo milk has higher fat content while cow milk has higher SNF.

These beneficial effects of cow’s milk come from the SNF. But our people want the fat content alone. As a result, the farmer has adopted the buffalo rather than the cow. The government can educate the people about the benefits of the cow milk.

That will increase the demand for cow milk, lead to an increase in the price of cow milk and make it profitable for the farmer to keep the cow.
Author was formerly Professor of Economics at IIM Bengaluru