The writing on the wall 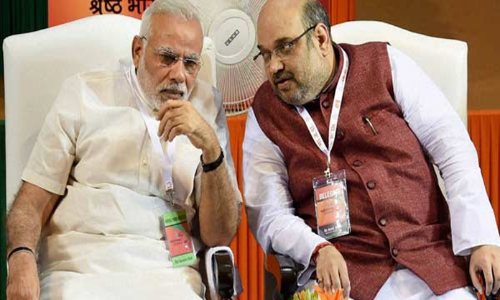 Modi-Shah duo's honeymoon with power seems to be coming to end ingloriously. The omissions and commissions of the Rafale deal are getting humongous and there is little defence coming credibly from the Treasury benches. It is amazingly clear that the Prime Minister deliberately got involved in the Rafale deal to favour someone unnecessarily and thus playing with fire to the detriment of our country's security.

It is hardly four years and still very fresh in the minds of the people of this country how Narendra Modi rode a wave of popularity and fired the dreams of the people. His promise on fighting the corruption is still ringing in our ears. His word on making India strong and vibrant is still etched in our minds. He promised to make this country's economy boom and job opportunities bloom for the youth. But does he know what is expected of a commitment?

A committed politician, like a writer, is dedicated to the advocacy of certain beliefs and programmes, especially those which are political and ideological and in aid of social reform. In order to achieve this one needs to detach oneself from the work in order to calculate its effect. But, Modi did not deliver the Arcadia and the rural masses are bearing the brunt of neglect. This manufacturer of lies has no qualms over his inadequacies and no shame of his misconduct.

For how could one fritter away a golden chance to do good to the country and fall in grace of the public eye within such a short time? And how? The mounting evidence against Rafale lies is stupefying. Is this cleansing the system of corruption or harbouring cronyism? First came the charge of interference by the PMO in the deal. Next was the concessions offered which were hitherto unheard of and were uncalled for.

Now there is this charge (more than substantiated for) which says that unprecedented concessions were offered with critical provisions for anti-corruption penalties and making payments through an escrow account had been dropped days before the signing of the inter-governmental agreement. Why did Modi's government prefer exactly what it opposed and what it promised to fight for in the beginning? Modi's rule was supposed to be a crusade against corruption. Not a crusade against some corruption or selectively against some who benefited under the Congress rule.

The very reason why the Congress regime had to go was because of the charges of corruption and nepotism. Today it is one-man's rule and one man's diktat. One cannot blame anyone else here. In the past we had Cabinet Ministers to be blamed and party leaders to be blamed and also officials.

But here it is all-in-one Modi who is heading the government and he is all about one to ten on any scale. But time changes the contours of one's fortunes. It allows homicide - of truth - and also suicide - of sham. Any ruler has every right to choose his path either to glory or doom. Modi seems to have chosen the second which is his rightful entitlement. All the best Mr Modi!.