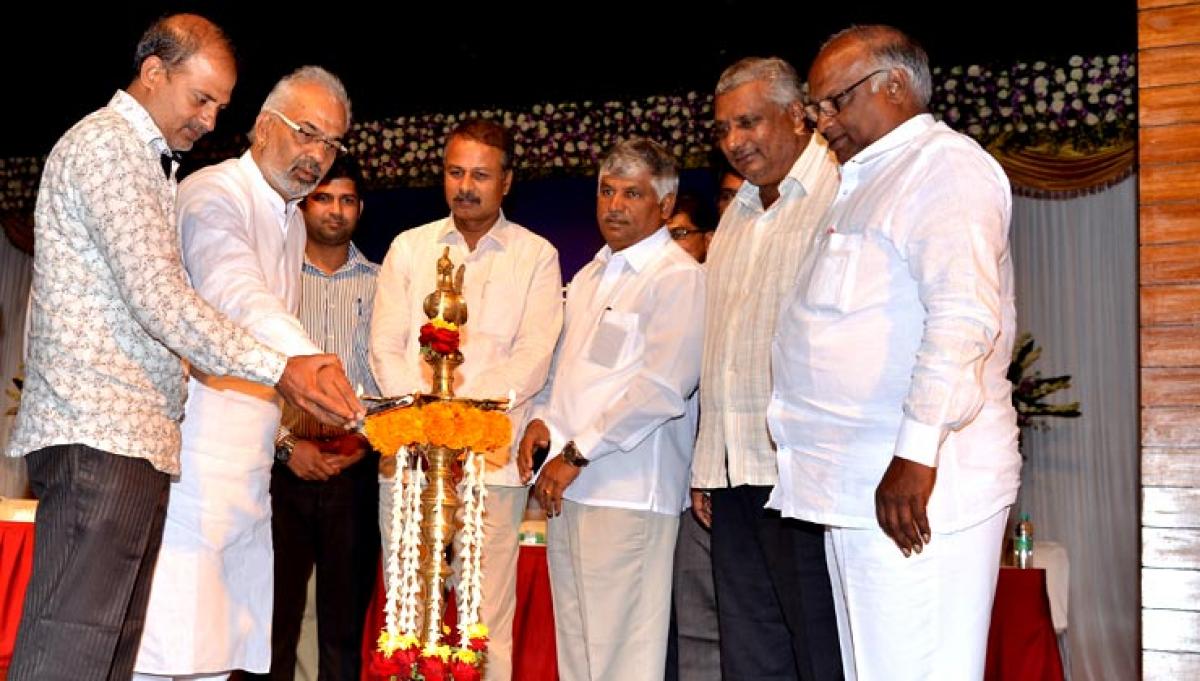 Bengaluru: The Tobacco Institute of India (TII), today hosted the ‘16th’ TII TobaccoFarmers award’.The Tobacco Institute of India instituted these awards in 1999 with a view to felicitate and encourage the cigarette leaf tobacco farming community for its effort in adopting modern and scientific farming practices, which would help improve yields, produce improved varieties and make Indian tobaccos competitive in the global market. More importantly, through these awards, TII expresses its unstinted support to the cigarette tobacco farmers and acknowledges their significant socio-economic contribution to the country's economy. Tobacco is a very important commercial crop, providing livelihood to 45.7 million people, comprising farmers, farm labours, workers, retailers etc. and their families. However, the current domestic market scenario is not only impacting the earnings and causing distress to the farmers but is also posing a serious challenge for the next crop season. In view of a sluggish domestic market, the Tobacco Board has restricted the authorized crop size for Andhra Pradesh and Karnataka for the next season to 220 Million Kgs. compared with 276 Million Kgs. this year. With no equally remunerative, viable alternative crop, which the farmers can grow on their unused land, the situation is grave for the FCV tobacco growers, as less production would severely affect their earnings in the next season auctions. The FCV Tobacco growers of Karnataka, Andhra Pradesh and Telangana are largely dependent on the Legal Cigarette Industry in the country. However, the cumulative impact of successive years of sharply escalating taxes and extreme tobacco control regulations continue to penalize the tax-paying, compliant legal industry causing sharp decline in volumes and leading to shift of consumption to non-cigarette tobacco product forms and contraband cigarettes which do not use domestic tobacco.
Consequently, over the last three decades, the legal cigarette share of total tobacco consumption in India has declined from 21% in 1981-82 to 11% currently while the overall tobacco consumption in the country has increased by 36% during the same period.
The decline in legal cigarette volumes has been particularly severe in the last few years with successive and large increases in excise duty rates on legal cigarettes with a cumulative impact of a 98% increase. In addition, legal cigarettes continue to attract very high rates of VAT and other state level taxes. As a result of such punitive taxation, legal cigarette volumes in India have declined sharply from 110 billion sticks in 2011-12 to 95 billion sticks in 2014-15 and are estimated to decline further in 2015-16. According to a recent FICCI study, illicit cigarettes account for 20.2% of the cigarette industry having grown from 15.7% in 2010, resulting in revenue loss of more than Rs.9,000 crores to the exchequer.
“It is very distressful to see lakhs of FCV farmers in the 2nd largest tobacco producing and a major tobacco exporting country of the world facing such serious threat to their livelihood. While declining volumes of legal duty-paid cigarettes in the country has adversely impacted domestic demand for leaf tobacco, the situation has worsened due to a corresponding fall in export demand and the withdrawal of export incentives under the new Foreign Trade Policy. Hence, we humbly urge the Government to recognize the huge livelihood-dependency on tobacco and the significant contribution of the legal industry to the exchequer while making policies with regard to tobacco.”Shri Syed Mahmood Ahmad added appealing to the policy makers.
In India, as much as 89% of tobacco consumption is in non-cigarette forms and illegal cigarettes. Legal cigarettes account for only 11% of total tobacco consumed in the country. Such a consumption pattern is unique to India and totally different from the western countries, where cigarettes are the dominant form with more than 90% share of total tobacco consumption. Consequently, as much as 87% of the excise revenue is generated from legal cigarettes despite its mere 11% share of consumption. The reason for this distorted pattern of revenue collections is that cigarettes are subjected to high and discriminatory rates of taxation, compared with other tobacco products. On a per kg basis, cigarette tax incidence is 47 times higher than other tobacco products.
The large price differential between cigarettes and other tobacco products encourages consumers to shift to the cheaper forms of tobacco consumption and illegal cigarettes, leading to an increase in overall tobacco consumption.Besides the escalating Central and State level taxes on legal cigarettes, excessive and unwarranted regulations such as the recently notified 85% pictorial warnings on tobacco product packaging will further impact the legal industry, provide a huge boost to the already surging non-compliant illegal trade and impact consumption of locally grown FCV tobaccos.
The current plight of tobacco farmers is serious and requires urgent attention through policy correction by the Government. Short term measures will provide temporary relief without addressing the core issues. The prosperity of Indian FCV Tobacco Farmers is inextricably linked with
the domestic cigarette industry. Unless the policy of discriminatory taxation and extreme regulations is corrected, a more fundamental solution to the current challenges that are faced by the farmers will be difficult to establish. Such an approach is necessary to protect the livelihood of lakhs of tobacco farmers and to combat the surging illegal cigarette trade which is causing huge revenue loss to the Government and defying the objectives of tobacco control.
Show Full Article
Email ArticlePrint Article
More On
Subscribe
Subscribed Failed...
Subscribed Successfully...